Less than two months after the arrest of journalist Julian Assange, and two weeks after his indictment under the Espionage Act, emboldened governments have sent the police after journalists who’ve challenged the state.  Joe Lauria reports.

following the arrest and Espionage Act indictment of Julian Assange a number of police actions against journalists for publishing classified information and other journalistic activity  has heightened fears among mainstream journalists  that they could be next.

Police in Sydney, Australia on Wednesday raided the offices of the taxpayer-funded Australian Broadcasting Corporation, copying thousands of files related to a 2017 ABC broadcast that revealed allegations of war crimes by Australian special forces in Afghanistan.

David Anderson, the ABC managing director, said it was “highly unusual for the national broadcaster to be raided in this way”.

“This is a serious development and raises legitimate concerns over freedom of the press and proper public scrutiny of national security and Defence matters,” he said. “The ABC stands by its journalists, will protect its sources and continue to report without fear or favour on national security and intelligence issues when there is a clear public interest.”

Lyons said the federal police were going through dozens of emails with the authority to delete or even change their content. Protagonist Winston Smith’s job in Orwell’s 1984 was to rewrite news archives.

“I recall writing ages ago about Australian legislation giving the Australian govt power to ‘add, alter or delete’ targeted material,” Australian psychologist and social critic Lissa Johnson told Consortium News. “The msm barely batted an eyelid at the time. Now that power is being wielded against the ABC.”

“It should chill the public as well as journalists,” he said.”These raids are all about intimidating journalists and intimidating whistle blowers so that mistakes made by the Government, including potential crimes, by the military, remain covered up, remain secret, and don’t fall in to the public domain.”

On Tuesday morning in an unrelated case, Canberra police entered the home of the political editor of the Murdoch-owned Daily Telegraph.

“Journalist Annika Smethurst opened her front door to find seven AFP officers waiting for her. All because she dared to do her job and keep the nation informed on what its government was doing,” the Telegraph said in an editorial.

Ironically, the Smethhurst article in April 2018 that raised the ire of the government “revealed the departments of Defence and Home Affairs were considering new powers allowing Australians to be monitored for the first time,” The  Telegraph reported. “Her original article included images of top secret letters between Home Affairs Secretary Mike Pezzullo and Defence Secretary Greg Moriarty.”

Assange was arrested in London on April 11. Police in Paris arrested two journalists who were covering Yellow Vest protests on April 20.  One of the journalists, Alexis Kraland, said he was taken into custody after refusing to be searched and to turn his camera over to police at Gare du Nord train station. The largest journalism union in France demanded an explanation from police. 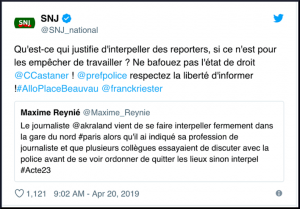 And on May 10 in San Francisco, police using sledgehammers to break down the door, raided the home of Bryan Carmody, a freelance journalist, to get him, while handcuffed, to reveal the source who leaked him a police report into the sudden death of the city’s elected public defender. Police took away computers, cameras, mobile phones and notes.

San Francisco Police Chief William Scott said initially that Carmody had “crossed a line” with his report.  After a public outcry and demands that Scott resign, the police chief issued an apology.

While there is no direct connection between Assange’s arrest and indictment for possessing and disseminating classified material and these subsequent police actions, a Western taboo on arresting or prosecuting the press for its work has clearly been weakened. One must ask why Australian police acted on a broadcast produced in 2017 and an article published in April only after Assange’s arrest and prosecution.

Within hours of Assange’s Espionage Act indictment on May 23, major publications and media figures, who have harshly treated Assange, began lining up in his defense out of self-interested concern that the government could apply the same prosecutions to them for also routinely publishing classified information.

Their fears are beginning to be realized.