Vigil at the Ukrainian Embass in D.C. To Mark 5 Years Since the Odessa Massacre Will Call on President Elect Zelensky to Allow an International Investigation

by Phil Wilayto of the Odessa Solidarity Campaign

This May 2 will mark five years since a fascist-led mob attacked and set fire to the House of Trade Unions in Odessa, Ukraine, causing the deaths of at least 42 people with more than 100 injured.

As part of an International Day of Solidarity with the People of Odessa, a vigil will be held from noon to 1 p.m. on May 2 outside the Ukrainian Embassy in Washington, D.C., 3350 M St. NW, supporting the demand of relatives of those killed for an international investigation into the massacre, something that has never happened.

Members of the U.S.-based Odessa Solidarity Campaign, the sponsor of the vigil, will deliver a letter to the embassy addressed to Ukraine’s newly elected president, Volodymyr Zelensky, urging him to abandon the ultra-nationalist policies of his predecessor, Petro Poroshenko, and agree to finally allow the truth to emerge about the tragic events of May 2, 2014. The letter also will call for an end to the ongoing political repression of the relatives and of journalists investigating the tragedy.

Among those planning to attend the vigil are members of the Embassy Protection Collective, the group of activists now protecting the Embassy of Venezuela from the threat of an illegal occupation by opponents of the legitimate administration of Nicolas Maduro. Following the Odessa vigil, activists will gather at the Venezuelan Embassy for a presentation by OSC coordinator Phil Wilayto on the similarities between the U.S. interventions in Venezuela and Ukraine. Wilayto will then spend the night at the Venezuelan Embassy in solidarity with the people of Venezuela and the activists defending the embassy.

The massacre on May 2, 2014, came just months after the democratically elected president was forced out of office in a violent U.S.-backed coup under circumstances similar to what we are now seeing unfold in Venezuela.

Many cellphone videos of the attack posted on the Internet clearly show people setting the five-story union building on fire with Molotov cocktails. People can be seen jumping from the burning windows and being beaten when they hit the ground. To date, not one of the perpetrators of these murderous actions has been brought to justice. At the same time, survivors of the fire as well as several sympathizers were arrested. Many of them are still in prison, never having been charged with a crime.

Family members, friends and supporters of the victims and survivors have repeatedly held memorials at the site of the killings, demanding an international investigation leading to prosecution of those responsible. Each year on May 2, thousands of Odessans gather there, despite repeated threats by neo-Nazi organizations to attack the mourners. And each year solidarity actions are held in cities around the world to support the people of Odessa in their demand for an international investigation.

The Washington vigil is being held in solidarity with many other actions planned for that day, including in Budapest, London, Moscow, New York, Vancouver and Vienna, as well as Odessa itself.

Below is a report-back from the vigil at the Ukrainian Embassy today:

There were six of us today outside the Ukrainian Embassy in Washington D.C. There would have been at least twice as many, but many of those who had planned to join us were inside the Venezuela Embassy protecting the building from right-wing Venezuelans gathered outside. No one was able to get in or out of the embassy 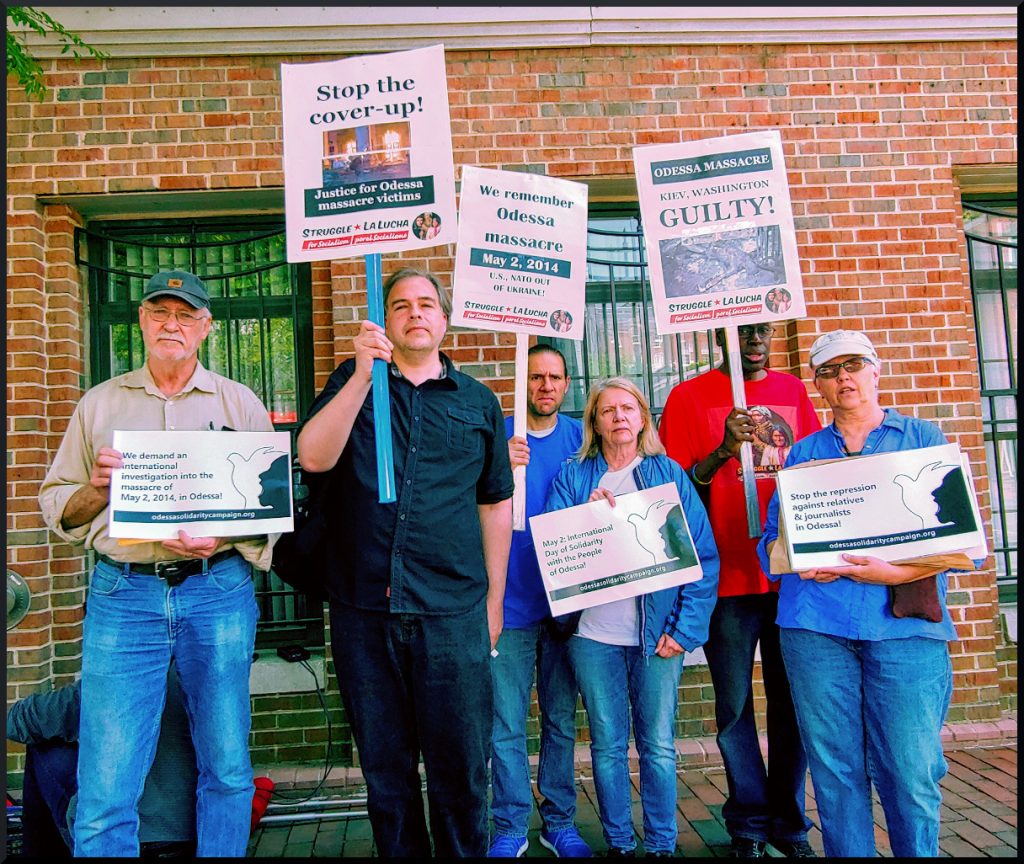 We got good coverage on the vigil from Russian-language media, and a reporter from Voice of America happened by and talked with us for a bit. The conversation went fine until we started pointing out the role of the U.S. in the Ukrainian coup of 2014 and the U.S., Canadian and British military presence today. Anyone in the D.C. area who could come by and join us would be more than welcome.  Stay informed by checking the websites of Code Pink, Popular Resistance, the ANSWER Coalition and Struggle / La Lucha. We will also be posting periodic reports on the Facebook page of The Virginia Defender.   In solidarity, Phil

The Sweden-based organization Prague Spring II has posted the call for international May 2 actions in English, German, Russian and Swedish.