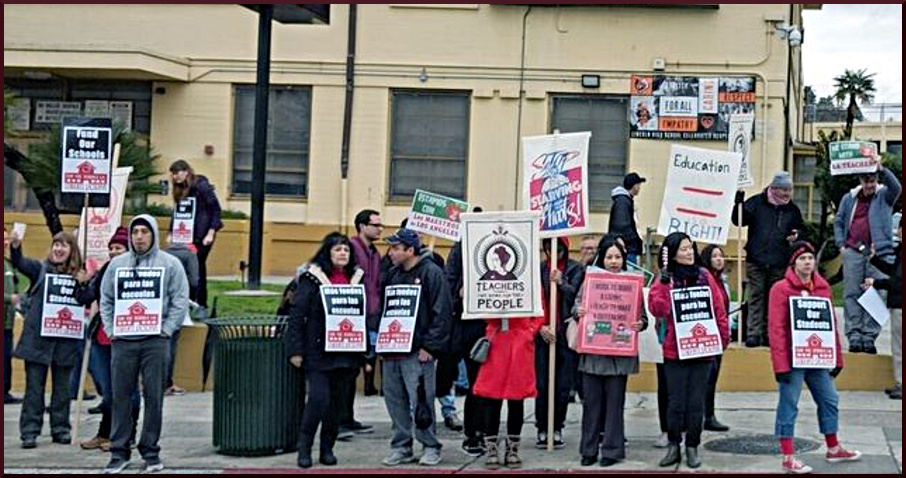 by Jerry White, from the World Socialist Website, January 16, 2019

Tens of thousands of Los Angeles teachers and their supporters manned picket lines and marched downtown yesterday on the second day of the strike by 33,000 educators in America’s second largest school district. The walkout has generated widespread public support and growing calls for the spreading of the strike throughout California and more broadly.

For the second day in a row, as many as 50,000 strikers, parents and students converged on the city center, this time in front of the headquarters of the California Charter Schools Association. They were joined by 75 teachers who walked out at three charter schools operated by Accelerated Schools. Another 900 unionized charter school teachers have been kept on the job by the United Teachers Los Angeles (UTLA).

There are growing calls by teachers throughout California and beyond for joint strike action. Teachers in Oakland are planning sickouts Friday to oppose threats by school officials to close one-third of the district’s schools, even as they expand privately run charter schools. Teachers in Denver, Colorado will be voting for strike action on January 19, and thousands of educators in Virginia are planning a mass rally in Richmond on January 28.

Like they did during the teachers’ rebellions last year in West Virginia, Oklahoma, Arizona and other states, the leaders of the American Federation of Teachers (AFT) and the National Education Association (NEA) are attempting to isolate teachers in Los Angeles and prevent the broadening of the strike across the state and the country. On the eve of the strike, AFT President Randi Weingarten, who is currently in Los Angeles, tweeted, “This is not about a strike wave—this is a specific fight for the kids & public schools of LA.”

But Los Angeles teachers are not fighting a local fight. They are confronting powerful financial and political forces, including the Eli Broad Foundation, that are conducting a nation-wide conspiracy, with the backing of both corporate-controlled parties, to dismantle and privatize public education. That is why LA teachers cannot fight this battle alone.

To expand the strike and mobilize teachers and other workers across California, the US and internationally, teachers must take the conduct of the struggle out of the hands of the UTLA and the national teacher unions, which are allied with the very same Democratic Party politicians that have waged a decades-long war on public education in California and across the US.

The World Socialist Web Site Teacher Newsletter urges teachers to form rank-and-file strike committees in every school and community, democratically controlled and independent of the UTLA. These committees must demand full access to the behind-the-scenes negotiations being conducted by the UTLA, the school district and the mayor and governor’s office. Strike benefits, not loans from the union’s giant strike fund, must be paid to all teachers to sustain this historic fight.

In opposition to the UTLA’s craven abandonment of the teachers’ most critical demands, rank-and-file teachers should draw up their own set of demands, including a 30 percent pay raise, a cap on class sizes of 25 students, billions for the hiring of new nurses and staff, the ending of punitive testing for students and teachers, and the immediate reconversion of charter schools into public schools.

To fight for these demands, strike committees would call on all school bus drivers, custodians and cafeteria workers to defy the orders of the Service Employees International Union (SEIU) and walk out to shut down all LAUSD schools. At the same time, LA teachers and their supporters among workers throughout the city should extend their picket lines to the 244 privately run charter schools and call on their brothers and sisters to join their strike.

A call must go out to all teachers in Oakland and across the state to carry out a joint statewide strike and to teachers and all workers throughout the US, including locked out federal workers and autoworkers facing the shutdown of GM plants, to prepare a general strike to oppose government austerity and social inequality. At the same time appeals should be made to striking Mexican auto parts workers, Dutch teachers and other workers around the world coming into struggle.

There is growing sentiment for such a fight. Precious, a young LA teacher, said,

“We need to have a statewide and nationwide strike wave. This affects the whole working class. Every teacher I know is working a second or a third job, whether it’s tutoring or something else, to make ends meet. We’re just trying to keep our heads above the water instead of being under it using a straw to breathe. There is more power in numbers, and this should be a nationwide and even a worldwide fight.”

“It doesn’t matter if we are in southern or northern California, or anywhere else, we’re fighting the same fight,” said Rosemary, an LA teacher with 27 years’ experience. Retired teacher Mike added, “When I started teaching in 1985, the UTLA used to fight principals that bullied teachers and tried to push them out. Now they have ‘teacher jails’ where older teachers close to getting a vested pension and health benefits are abused and over-supervised. This goes unopposed by the UTLA and their paid staff who tell teachers, ‘You have to follow the district’s rules.’ We used to have 43,000 teachers, and now we’re down to 33,000. This was done with the help of the UTLA.”

Teachers also denounced the refusal of the UTLA to pay strike benefits.

“They’ve been talking about a strike since 2017,” another teacher said. “We’ve been paying union dues, and there hasn’t been a strike for 30 years, so there should be money for us to strike. We should be getting $1,000 or $1,500 to help us pay our bills.

“Where did all this money go? The AFT president Randi Weingarten makes a half a million dollars a year. None of us are making that kind of money. Then the union is also giving millions to these politicians who say they are for us, but once they’re elected, they do nothing for us.”

In his Tuesday night Facebook address to teachers, UTLA President Alex Caputo-Pearl placed all the onus for sustaining the strike entirely on teachers, saying it is their duty to picket every day “like it’s a work day.” He was silent on growing calls for a statewide and national strike and said nothing about providing teachers with strike pay.

The UTLA president also said LA Mayor Eric Garcetti, another potential Democratic presidential candidate, had come to Tuesday’s downtown rally and was helping reinitiate negotiations with the school district. Caputo-Pearl said he was in discussions with the new Democratic governor of California, Gavin Newsom.

“If you have frustrations over how the schools have been run,” Caputo-Pearl told teachers, “take pride that we’re making history, and those who have power in this country are coming out in support of us.”

When it comes to strengthening the fight of LA teachers, the empty statements of support from these Democratic politicians add up to nothing. The Democratic Party exercises complete control over every level of government in Los Angeles and the state of California. No matter how many phony statements Sanders, Warren & Co. make about “progressive” Democrats, the fact is that their party has overseen the dismantling of public education in California. LAUSD Superintendent Austin Beutner is a Democrat and former official in the Clinton administration, and the Obama administration and his education secretary, Arne Duncan, spearheaded the assault on teachers and oversaw a vast expansion of charter schools.

The comments by Garcetti should be taken as a warning by teachers that the UTLA is preparing to sell out the strike. “Rhetoric aside, when we look at what that distance is,” Garcetti said at a news conference Monday afternoon,

“I truly do believe not a lot separates us materially. We have some policy issues to confront on things like charters, on things like how is LAUSD going to be reorganized under the new superintendent and what role will teachers play in that reorganization, but I really do know … they’re not talking very far away from each other, and that gives me the confidence we can get this done soon.”

In other words, the UTLA is seeking to see what role it can play in Beutner’s plan to “reorganize” the school district, and if the union can get greater access to the charter schools so it can get these miserably exploited teachers to pay union dues. This is the same role that the unions have played nationally, exemplified by the AFT’s slogan, “school reform with us, not against us.”