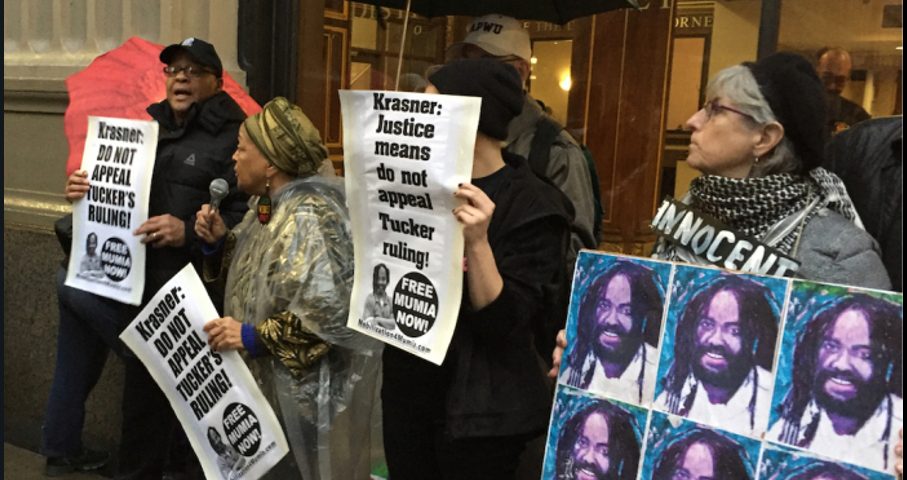 On Dec. 27, Philadelphia Superior Court Judge Leon Tucker ruled in favor of Mumia Abu-Jamal, holding that the actions of former Pennsylvania Supreme Court Judge Ronald Castille had demonstrated a “lack of impartiality” and “the appearance of bias.”

Tucker’s decision represents a major victory for Abu-Jamal, which opens the door to a new trial—or dismissal of the murder charges against him—after an appeal to the Pennsylvania courts.

Mumia was incarcerated in 1981 in a racist frame-up murder trial of police officer Daniel Faulkner and on death row for most of the past 37 years. He is a prize-winning journalist and the author of 10 books on various aspects of the freedom struggle. His latest book, “Murder Incorporated: Empire, Genocide, Manifest Destiny,” co-authored in 2017 by filmmaker Stephen Victoria (“Long Distance Revolutionary,” 2014) with a forward by Chris Hedges, is invaluable reading for revolutionary activists who seek the truth about capitalist imperialism’s centuries of horrors and the historic resistance against them.

Mumia’s freedom struggle has been supported by scores of trade unions across the U.S. and in Europe as well as by Amnesty International, the NAACP, the European Parliament and numerous city council resolutions from San Francisco to Detroit.

Tucker’s 27-page ruling was in two parts. He held in Part Two that, with regard to all of Mumia’s numerous denied Post Conviction Relief Act (PCRA) appeals between 1998 and 2014, Supreme Court Judge Ronald Castille’s actions in campaigning for the Pennsylvania governor to sign death-penalty warrants for all “convicted cop killers” and other biased acts had violated Mumia’s fundamental constitutional rights.

Castille had participated in Pennsylvania Supreme Court decisions that denied all of Mumia’s appeals, including a request from Mumia’s attorneys that he recuse himself from deciding the case he had helped to prosecute and another decision in which the same Castille court refused to consider documented evidence submitted by court stenographer Terri Maurer Carter that Mumia’s trial judge, Albert “the hanging judge” Sabo, had stated in his antechambers before entering the courtroom to adjudicate Mumia’s case,

Mumia’s decades-long sojourn through the racist U.S. “criminal justice system” is replete with what has become infamously known as “the Mumia exception,” that is, contorted applications of the “law” aimed at denying its applicability to the facts in Mumia’s case. These include systematic exclusion of eyewitness testimony proving his innocence, intimidation of witnesses, falsification of exonerating ballistics findings, fabrication of testimony that Mumia admitted to the killing of police officer Daniel Faulkner, and Mumia’s physical exclusion from a majority of his trial proceedings—to name a few of the legal atrocities attendant to his trial and subsequent proceedings.

Judge Tucker’s ruling opens the door for Mumia to appeal all of Castille’s decisions over a 17-years period and for renewed massive and united national and international campaigns in the streets to demand Mumia’s freedom now.

Tucker denied Part One of Mumia’s appeal, which pertained to whether or not Castille had been significantly or personally involved in Mumia’s prosecution, in order to qualify under the provisions of the Williams v. Pennsylvania ruling by the U.S. Supreme Court in 2016. Mumia’s attorneys may appeal this decision in order to fight on both legal fronts.

Meanwhile, Philadelphia’s “liberal” district attorney, Larry Krasner, whose actions to date have largely conformed to the reactionary positions of the Fraternal Order of Police, may well appeal Tucker’s amazing and unexpected decision. This would inevitably lead to years of further litigation.

Mumia’s supporters are campaigning to tell Krasner: Do not appeal Judge Tucker’s decision granting new rights of appeal to Mumia Abu-Jamal. A rally is planned to take place in front of the D.A.’s office on South Penn Square (across from City Hall) in Philadelphia, starting at noon on Saturday, Jan. 5.

From Mumia: Answers to questions posed by Professor Jennifer Black

What’s your reaction to the news of that your appeals have been reinstated?

My reaction?  It reminded me of when Nixon went to China, and a US diplomat asked China’s #2, Chou En-Lai what he thought about the French Revolves. He mused about it and replied, “It’s too soon to tell”. I felt the same way. But it was a pleasant surprise.

I think we can’t underestimate the impact of the recent rulings from the US Supreme Court. (Williams v. Pa.); judges and lawyers are sensitive to such things.

I’m ok, all things considered; better than I was few years ago; but I often forget my age….

What new projects are you thinking about?

My big dreams have never changed: freedom, with my family. May it be so! Ashe! And, of course freedom for all the MOVE 9!

New Years resolutions for the Left?

For ’19, build the Freedom Movement, ‘cuz guess what? It’s gonna be needed!’

Do you have a message for your supporters?

I’m always—always—impressed with our supporters/people! I hope they feel my vibration of deep appreciation and love for Alla them! We’re Ona Move! NEXT! ;)>. alla best, mu♪.

Jeff Mackler  is the national secretary of Socialist Action, a Trotskyist political party.[1] He was the nominee of Socialist Action for United States Senate in 2006 and President of the United States in the 2016 election. Mackler founded Northern California Climate Mobilization, is a longtime teacher and union activist with the American Federation of Teachers in Hayward, California and is director of the Mobilization to Free Mumia Abu-Jamal

Mumia Abu-Jamal  is a political activist and journalist who was convicted of murder and sentenced to death in 1982 for the 1981 murder of Philadelphia police officer Daniel Faulkner. Since 1982, the murder trial of Abu-Jamal has been seriously criticized for constitutional failings. After numerous appeals, his death penalty sentence was overturned by a Federal court. In 2011, the prosecution agreed to a sentence of life imprisonment without parole.     He is widely known while on death row for his writings and commentary on the criminal justice system in the United States.