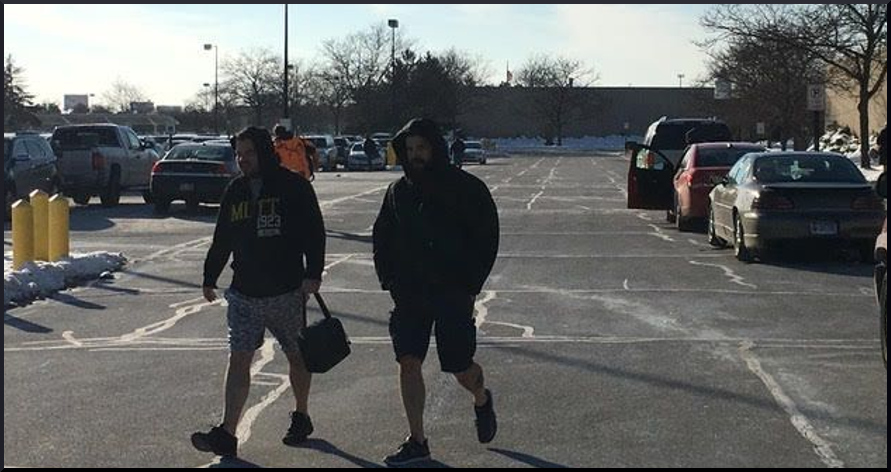 Photo: Workers leaving the Detroit-Hamtramck plant before the elimination of the second shift in March 2017

by Jerry White, from the World Socialist Website, November 27, 2018

General Motors officials announced yesterday that the Detroit-based automaker will close five plants in the US and Canada in 2019 and another two, still unspecified, plants outside of North America. The elimination of 14,700 production and salaried jobs is part of a plan to cut $6.5 billion in costs by 2020.

GM’s move is expected to be followed by a similar destruction of jobs by Ford and other corporations as part of a new restructuring of the global auto industry. With vehicle sales contracting and relentless pressure from Wall Street to boost profit margins, GM is seeking to get ahead of its rivals by slashing thousands of jobs, particularly in the less profitable passenger car market.

To fight back, autoworkers should prepare industrial action, including a walkout across the US and Canada, to defend all jobs and oppose further attacks on wages, benefits and working conditions. This will require the formation of rank-and-file factory committees, independent of the cheap-labor contractors known as the United Auto Workers (US) and Unifor (Canada), to link up auto and auto parts workers across the industry and internationally.

The factories that will be closed in 2019 are the Detroit-Hamtramck Assembly plant, with 1,500 jobs; the Lordstown Assembly Plant in Warren, Ohio, with 1,600 jobs; and the Oshawa Assembly Plant, outside of Toronto, Ontario, with 2,500 jobs. Another 645 jobs will be cut at transmission factories in the Detroit suburb of Warren and at the Baltimore Operations in White Marsh, Maryland.

GM is also wiping out the jobs of 8,000 salaried and salaried contract staff—or 15 percent of its engineers, designers and other white-collar workers in North America. Ford also plans to cut salaried positions but has not announced a number.

“These actions will increase the long-term profit and cash generation potential of the company,” GM CEO Mary Barra declared. Wall Street celebrated the plant closings by pushing the company’s stock up nearly 7 percent after the news release. The automaker, which reported a 37 percent increase in third-quarter North American operating profits, is in the midst of a two-year $10 billion spending spree on stock buybacks and dividend payouts to rich investors.

The closings will have a devastating effect on communities already hit by decades of plant shutdowns and mass layoffs. The Detroit-Hamtramck plant, opened in 1985, is one of the few auto factories left inside the former Motor City, now the country’s poorest large city. The Ohio plant lies just outside of Youngstown, a former steel mill town where 59.2 percent of children live below the official poverty rate. After years of plant closings in Oshawa’s “Autoplex,” one in four of the city’s children is growing up in poverty.

The latest assault on autoworkers is being facilitated by the UAW and Unifor, which have spent decades collaborating with the auto companies to slash jobs, lower wages and destroy benefits. They are working to block any effort by workers to resist the onslaught, while preparing a new round of concessions and givebacks.

Workers in the Oshawa factory walked out of the factory Monday, expressing the outrage over the endless lies by the company and the unions. Unifor Plant Chairman Greg Moffat instructed striking workers to go in to work Tuesday, saying, “We’re going in to work tomorrow and you’re going to build the best vehicles you can make.”

The UAW and Unifor rammed through concessions contracts in 2015 and 2016 over widespread opposition, claiming that the further attack on wages and benefits would “save jobs.” Unifor national president Jerry Dias told angry workers in 2016, “the commitment to Oshawa is hundreds of millions of dollars, therefore our fear of a closure in 2019 is now over.” This was a lie.

In 2015, the UAW pushed through its pro-company contracts through a combination of threats, intimidation and fraud, including overriding a “no” vote by skilled trades workers at GM.

These are not workers’ organizations, but arms of corporate management staffed by executives with incomes that place them in the top 5 percent of the population. According to the UAW’s filing with the US Labor Department, it has more than $1 billion in assets. While collecting $175 million in dues from workers, it spent $75 million on executives and staff and only $2.7 million in strike benefits.

The UAW also reported that it received $6.2 million in 2017 from training centers run by GM, Ford and Fiat Chrysler. These corporatist schemes have been the conduit for billions in payoffs to the UAW since the early 1980s. This includes the millions in bribes to the UAW executives who signed the 2007, 2009 and 2015 contracts. These contracts substantially lowered labor costs by establishing a two-tier wage and benefit system and accelerating the replacement of higher-paid fulltime workers with temporary part-timers.

In a statement from the UAW, Terry Dittes, who will negotiate the contract in 2019, blustered that the UAW would oppose the layoffs “through every legal, contractual and collective bargaining avenue open to our membership.” In fact, the only “fight” the UAW and Unifor intend to carry out is against rank-and-file workers who resist the corporate-union conspiracy to impose new, more devastating concessions.

This includes holding the shutdowns over workers’ heads in order to push through “plant saving” agreements that will set the precedent for a new stage of attacks. According to the Wall Street Journal,

“A GM spokesman said the plants in Michigan and Ohio will be idled and their fates will be discussed next year during the company’s negotiation for a new four-year contract with the United Autoworkers Union.” To “further enhance business performance,” the company statement declared, GM “will continue working to improve other manufacturing costs, productivity and the competitiveness of wages and benefits.”

In their effort to suppress opposition from workers, the UAW and Unifor are resorting to promoting nationalist poison. Deliberately remaining silent on the shutdown of the Oshawa plant across the border in Canada, UAW President Gary Jones echoed Trump’s nationalist rants by calling on “patriotic consumers” to join the UAW in “saying ‘No’ to American companies that choose foreign workers over American workers.”

The UAW and Unifor have long spewed nationalist and racist filth to divide workers and justify their “partnership” with the auto corporations. The enemies of US and Canadian autoworkers are not the workers in Asia, Latin America, Europe or anywhere else, but the global auto corporations and the giant banks and financial institutions, which are attacking workers all over the world.

The new round of North American closures follows GM’s announcement of its planned closure of its assembly plant in Gunsan, Korea; the selloff of its European Opel and Vauxhall operations to French carmaker PSA; and the shuttering of its plants in Australia and South Africa.

Only an internationally coordinated counteroffensive by workers can fight the global auto giants and the capitalist profit system. GM is implementing a strategy backed by the ruling class and its political instruments, the Democratic and Republican parties, to transfer wealth from the working class to the financial markets and the pockets of the corporate and financial elite.

The Socialist Equality Party and the WSWS Autoworker Newsletter call on GM and other autoworkers to take immediate measures to form new organizations of struggle, rank-and-file factory committees, independent of the UAW and Unifor. These committees will be the basis for an industrial counteroffensive to defend jobs and living standards and reverse the grotesque levels of social inequality created by the capitalist profit system.

This must be combined with a new political strategy for the working class based on the international unity of workers and the fight for socialism, which would include the transformation of the giant corporations, including GM, into public enterprises collectively owned and democratically controlled by workers themselves.

The WSWS Autoworker Newsletter is holding an emergency online meeting Wednesday night at 8 p.m. EST/7 p.m. CST. The meeting will discuss a strategy for GM, Lear, and all other autoworkers to unify their struggle against the companies and the corporate-controlled UAW. To receive information on how to attend, text Autoworker to 555888, or register here. 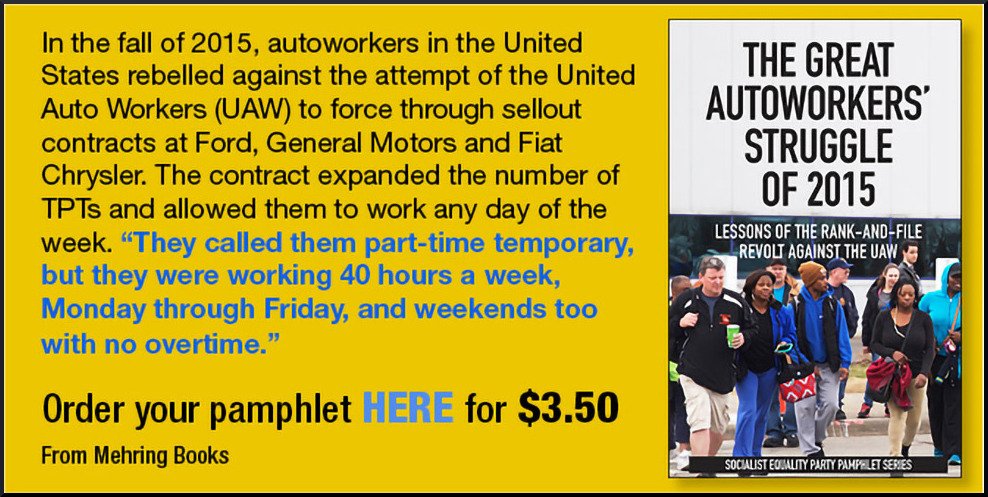 Jerome “Jerry” White  is an American politician and journalist, and is the Labor Editor reporting for the World Socialist Web Site. He is a member of the Socialist Equality Party of the United States, and was a member of its predecessor the Workers League.