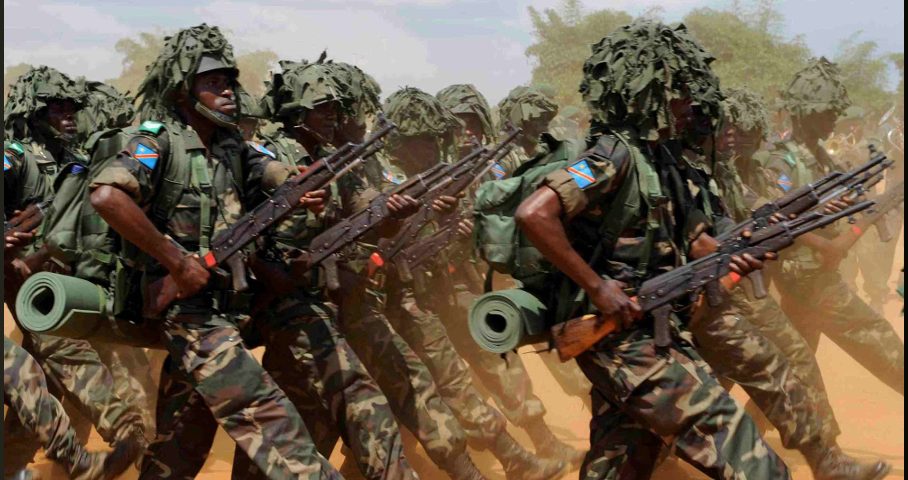 U.S. AFRICOM Photo: Camp Base Kisangani, Democratic Republic of the Congo, a Charlie company of the newly designated 391st commando battalion parade before Congolese and U.S. dignitaries at the conclusion of the ceremony marking the end of their training by U.S. Special Operations Command Africa September 15, 2010. The battalion was trained by U.S. Special Operations Command Africa as part of Operation Olympic Chase.  Operation Olympic Chase was a 9 month course designed to form a fully professional light infantry battalion with supporting medical and engineering elements

The Black Alliance for Peace
Calls on the U.S. Government to Shut Down U.S. Africa Command (AFRICOM)

NOVEMBER 21, 2018—The Black Alliance for Peace (BAP), a founding member of the Global Campaign Against U.S./NATO Military Bases, joined 300 attendees from 36 countries at a historic conference last weekend that re-committed anti-war activists to closing U.S. and North Atlantic Treaty Organization (NATO) military bases throughout the world.

The Global Campaign Against U.S./NATO Military Bases held its first international conference November 16-18 at Liberty Hall in Dublin, Ireland. The conference’s Unity Statement was endorsed by more than 700 individuals and organizations. The Dublin conference convened several months after the U.S.-based Coalition Against U.S. Foreign Military Bases held its first conference in Baltimore, Maryland, in the United States. Ireland was chosen because of its neutral position, having never joined NATO.

The United States operates more than 1,000 military facilities on six continents. This enormous presence embodies the U.S. policy of Full Spectrum Dominance, which threatens democracy and self-determination for other nations.

BAP reaffirms our commitment to this world-wide initiative and to our recently launched campaign, U.S. Out of Africa!, to shut down U.S. Africa Command (AFRICOM). This military program is present in 53 out of 54 African countries. BAP is circulating an online petition that makes these demands:

After recent U.S. midterm elections, the Democratic Party now makes up the majority of the U.S. Congress and owes that status to Black U.S. voters. As colonized subjects on stolen land, the U.S.-based Black diaspora wants the nations of their ancestral continent to live freely and independently, which means AFRICOM must be dismantled. The BAP petition calls on CBC members to act as true representatives of their constituents, who are among the most peace loving in the country.

There can be no peace or democracy when a group of nations and their proxies can wage violent action against people around the world. BAP’s mission to re-capture and re-develop the historic anti-war, anti-imperialist and pro-peace positions of the radical Black movement will play a crucial part in the Global Campaign Against U.S./NATO Military Bases.

The Joint Communiqué adopted by participants at the First International Conference Against U.S./NATO Military Bases can be found here: https://blackallianceforpeace.com/movement-news/firstconferenceagainstusnatomilitarybases