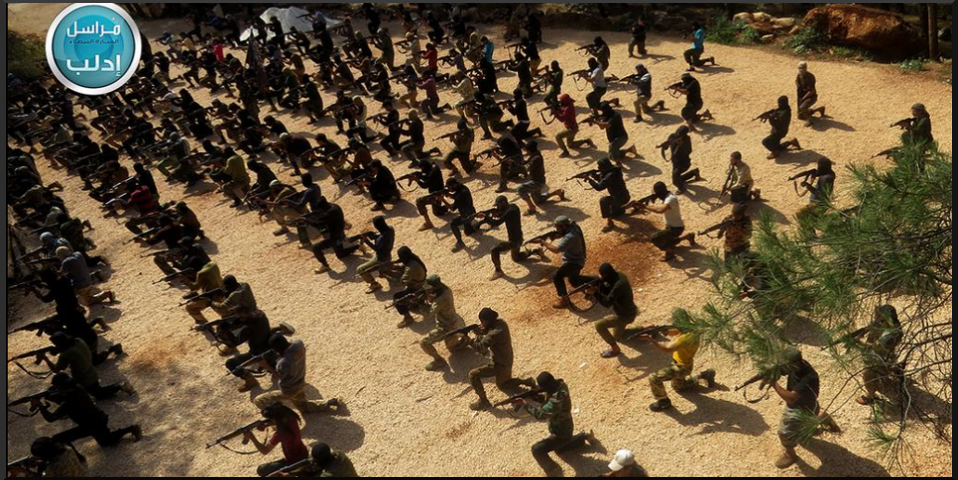 On September 13, 2018, two days after the 17th anniversary of the 9/11 terror attacks, Congresswoman Tulsi Gabbard addressed her colleagues from the floor of the House of Representatives.

“Two days ago, President Trump and Vice President Pence delivered solemn speeches about the attacks on 9/11, talking about how much they care about the victims of Al-Qaeda’s attack on our country,” she observed. “But they are now standing up to protect the 20,000 to 40,000 al-Qaeda and other jihadist forces in Syria, and threatening Russia, Syria, and Iran with military force if they dare attack these terrorists.”

“More than 10,000 rebels in [Idlib] province are believed to be aligned with Al-Qaeda. So that would mean that 17 years after 9/11, America could soon find itself bombing a country to protect al-Qaeda sympathizers. Why would we do that?”

The short answer is: Russia.

In July 2017, President Donald Trump closed Operation Timber Sycamore, a CIA program to train and equip opposition forces fighting to overthrow Syrian President Bashar al-Assad. In announcing his decision, Trump observed that many of the weapons provided by the United States ended up in the hands of al-Qaeda affiliates inside Syria. Moreover, the CIA program was putting the U.S. on a collision course with Russia, whose 2015 intervention in the Syrian Civil War had decisively tipped the balance in favor of Assad.

Since that decision was made, the national security team advising Trump has undergone significant changes, with Mike Pompeo taking over at the State Department from Rex Tillerson, and John Bolton doing the same as national security advisor, replacing General H. R. McMaster. Overnight, the U.S. assessment of Russia’s involvement in Syria went from one where Russia held the initiative in the fight against Islamic fundamentalists to one where Russia was suddenly “stuck” in a quagmire of its own making. Donald Trump’s new embrace of the Syrian opposition is reflective of this new thinking, even in the face of the feckless hypocrisy that was called out by both Gabbard and Carlson.

The new policy, pushed by Pompeo and Bolton, mirrors that of a bygone era. Operation Cyclone, the CIA-led program to equip and train anti-Soviet Islamist forces operating inside Afghanistan, had its roots in the Nationalities Working Group (NWG), created by President Jimmy Carter’s national security advisor Zbigniew Brzezenski in 1977. That program was dedicated to weakening the Soviet Union by inflaming ethnic tensions among its Islamic populations. By July 1979, Brzezenski and the NWG were able to get Carter to sign a secret directive to arm anti-Soviet Islamists in Afghanistan, with the aim of luring the Soviets into invading and creating the conditions for a Vietnam-like disaster. The Soviets did just that, and the rest is history.

Professor Richard Pipes took over the work of the NWG in 1981, after the election of President Ronald Reagan. A noted Russologist, Pipes had turned his Harvard Ph.D. thesis into a book, The Formation of the Soviet Union, which detailed the tenuous ties between Slavonic Russia and the Muslim peoples of Central Asia who made up a significant part of the Soviet Union. Pipes recognized early on the vulnerability of the Soviet Union to Muslim nationalism and non-state Islamist movements, having chronicled the Basmachi resistance to Soviet rule from 1919 to 1931 in what is today the independent republics of Uzbekistan and Tajikistan. His insights were prescient, and helped shape the Reagan-era strategy of assisting the anti-Soviet Mujahedeen in 1980s Afghanistan.

Pipes’ crowning achievement was the codification of Islamist power in Afghanistan through the issuance of National Security Decision Directive Number 75. The purpose of NSDD 75 was to exploit the uncertainty that had gripped the Soviet Union in the aftermath of Leonid Brezhnev’s death by implementing a broad-based policy designed to contain and reverse Soviet expansionism in geographical regions of propriety concern to the United States. A major part of this centered on keeping maximum pressure on Moscow to withdraw from Afghanistan by ensuring that the cost of continued occupation remained high. This translated into nearly unfettered support to Islamist resistance groups operating in Afghanistan and Pakistan.

The story of America’s empowerment of Islamic fundamentalism via the war in Afghanistan has been recounted elsewhere in great detail, perhaps most notably in Steven Coll’s excellent books, Ghost Wars and Directorate S. The consequences of these actions, namely the 9/11 terror attacks, have also been recorded, first and foremost in Lawrence Wright’s The Looming Tower. Among specialists and regionalists, the cause-effect relationship between America’s effort to roll back Soviet influence in Afghanistan and the rise of al-Qaeda as a global threat appears obvious, especially with the 20/20 vision that hindsight affords. In 1998, however, even while the CIA’s ALEC Station was running down the al-Qaeda threat, Brzezenski gave short shrift to the notion that policy shortcomings in Afghanistan were anything to be concerned about.

“What is most important to the history of the world?” the former national security advisor asked. “The Taliban or the collapse of the Soviet empire? Some agitated Muslims or the liberation of Central Europe and the end of the cold war?”

Brzezenski saw no connection between what the U.S. did in Afghanistan and a global Islamic threat.

“It is said that the West had a global policy in regard to Islam,” he noted. “That is stupid. There isn’t a global Islam. Look at Islam in a rational manner and without demagoguery or emotion. It is the leading religion of the world with 1.5 billion followers. But what is there in common among Saudi Arabian fundamentalism, moderate Morocco, Pakistan militarism, Egyptian pro-Western or Central Asian secularism? Nothing more than what unites the Christian countries.”

Brzezenski, who knew little about the Islamic world, was wrong. The global Islamist movement known as Al-Qaeda had grown out of U.S. involvement in Afghanistan and expanded into the Levant in the aftermath of the American-led invasion and occupation of Iraq in 2003. Al-Qaeda in Iraq later morphed into the Islamic State, which, at the height of its power and influence, controlled an area with a combined population of nearly eight million people, with an annual operating budget of over $1 billion, and more than 30,000 fighters under arms.

Fast forward and the defeat of the jihadist group in its Iraqi and Syrian heartland is raising new problems. Hundreds of militants are returning to their homes. These fighters possess a wealth of practical experience in waging guerrilla conflict and represent a genuine threat to their homelands. Russia and China are both at risk from Islamic State veterans hailing from the northern Caucasus and western China respectively. Indeed, analysts in both countries accuse the U.S. of facilitating the return of these fighters for the express purpose of generating this kind of destabilization. Russia fought two bloody wars against Islamist separatists in Chechnya, and one of its stated goals in entering the Syria conflict was to prevent Islamist extremism from springing up closer to home.

The Islamic State has already taken root in the northern Caucasus, with more than a dozen deadly attacks against Russian military and police units having taken place under its banner. Any infusion of battle-hardened fighters from Syria onto Russian soil would be seen by Moscow as a serious threat. Meanwhile, the Ferghana valley, where the three former Soviet republics of Uzbekistan, Tajikistan, and Kyrgyzstan come together, has sent an estimated 4,000 fighters to Syria since 2012.

Like Moscow, Beijing hopes to head off the possible return of radicalized nationals from Syria—namely, fighters from its Uighur population. China’s concerns also extend to its neighbor Afghanistan, where the U.S. military has targeted Taliban fighters and Uighur members of the East Turkestan Islamic Movement. Some 3,000 fighters have pledged their allegiance to the Islamic State there—challenging the Taliban as the symbol of anti-American resistance in the region.

The primary danger to Moscow and Beijing is that any widespread Islamic State rebirth in Central Asia would provide a new training ground for the next wave of Islamist militants, allowing for the continued radicalization of Russian and Chinese Muslims. These risks perpetuate the kind of social and economic disruption that has paralyzed Afghanistan and threatens the wider region.

The tens of thousands of Al-Qaeda-affiliated fighters located in Syria’s Idlib province represent an obvious threat, and Russia’s efforts to destroy them are worthy of support. But Trump’s inner circle seems to be channeling their inner Brzezenski, ignorant of the threat posed by the non-state Islamic fundamentalism and singularly focused on reversing Russian influence in Syria. It’s as if the Cold War never ended. At a time when the world has its boot on the neck of the Al-Qaeda/Islamic State menace, Donald Trump seems intent on letting this odious ideology survive. One can only hope that history will not repeat itself.

Scott Ritter is a former Marine Corps intelligence officer who served in the former Soviet Union implementing arms control treaties, in the Persian Gulf during Operation Desert Storm, and in Iraq overseeing the disarmament of WMD.