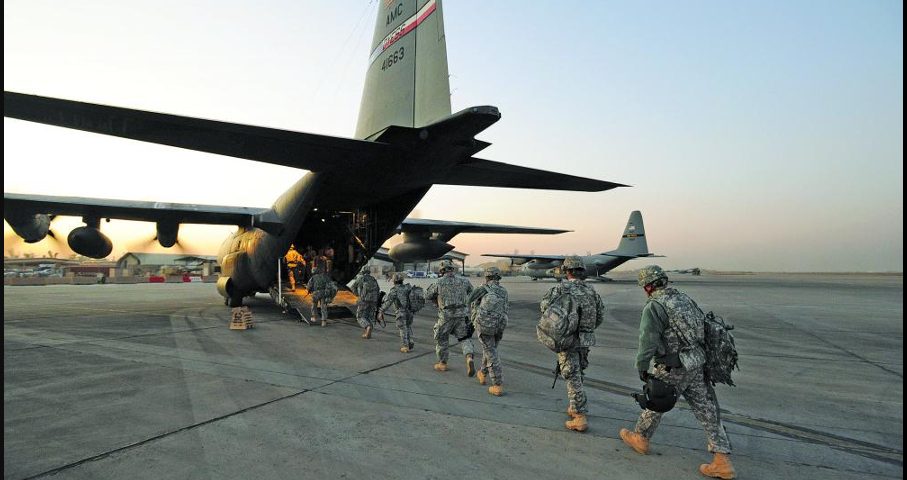 Seventeen years after the September 11, 2001 terror attacks—which became the official pretense for the “war on terror” and a series of bloody conflicts that cost the lives of at least one million people—Washington is on the verge of launching a massive new military offensive in Syria in defense of Al Qaeda-linked forces.

On Monday, US National Security Advisor John Bolton, one of the architects of the 2003 invasion of Iraq, said the US has been actively preparing to launch a military strike against the Syrian government, using the pretext of a chemical weapons attack by the Syrian government that the Pentagon claims will take place sometime in the imminent future.

“We’ve been in consultation with the British and the French, who joined us in the second strike [against the Syrian government in April], and they also agree that another use of chemical weapons will result in a much stronger response,” Bolton warned.

Washington is making clear that it is responding not to what it claims the Syrian government has done, but what it claims it will do in the future. A chemical weapons “attack” will, in other words, be made to order.

The accusations being cooked up against the Syrian government are more brazen and shameless versions of the US claims of chemical weapons attacks in Khan Shaykhun in 2017 and in Douma earlier this year, which leading investigative journalists have asserted were likely staged by the CIA’s Islamist proxy forces.

The trumped-up pretexts under which Washington has sought to escalate US involvement go unquestioned and unchallenged in the US print and broadcast media, as though the Bush administration’s lies about “weapons of mass destruction” in Iraq never happened.

The real motivation for the fabricated justifications is clear. The Syrian government, aided by its allies Russia and Iran, is on the verge of a major new offensive to recapture the Syrian province of Idlib, which is expected to succeed, barring US intervention. It would effectively place the whole country under the control of the Syrian government and mark the decisive failure of the seven-year regime-change effort by the United States in alliance with Islamist militias.

This would be a major debacle for US imperialism, and Washington is not prepared to accept such an outcome, even if it means a shooting war with Syria’s Russian and Iranian allies.

On Saturday, a force of 100 Marines was sent to reinforce a US base in Syria after Russian military forces requested permission to attack ISIS positions nearby.

The Pentagon made clear that US forces are fully prepared to engage Russian troops. “The United States does not seek to fight the Russians” a Pentagon spokesman said. “However, the United States will not hesitate to use necessary and proportionate force to defend US, coalition or partner forces.”

Since the beginning of the US regime-change operation in 2011, the CIA and Pentagon have armed and trained Islamist militias linked with Al Qaeda and the Islamic State, which it used as its shock troops in an effort to overthrow the Syrian government.

Now, 17 years after September 11, 2001, Washington is preparing a major new war to protect fighters aligned with the very organization charged with carrying out the attack on the World Trade Center.

This seemingly bewildering about-face expresses the real nature of the so-called “war on terror.” Leaving aside the unexplained circumstances surrounding the 9/11 attacks themselves, from its outset it was meant to dragoon public opinion behind wars of aggression long planned by Washington.

The day after the 9/11 attacks, the World Socialist Web Site explained that

“From the standpoint of the American government, the crusade against terrorism has been far more a campaign of propaganda to justify US military violence around the world than a conscientious effort to protect the American people.”

Subsequent events have thoroughly vindicated this analysis. This “war on terror” was the pretext for a renewal of imperialist neocolonialism on a massive scale, including the launching of the 2001 invasion of Afghanistan, the 2003 invasion of Iraq, the wars for regime-change in Libya and Syria, and the US clandestine murder and torture operations in dozens of countries throughout the world.

The aim of this offensive was summed up in a secret neoconservative strategy document quoted by journalist Seymour Hersh in his latest book. It stated that the Iraq war “will start making the US the hegemon of the Middle East. The correlative reason is to make the region feel in its bones, as it were, the seriousness of American intent and determination.” All those who would oppose American aims in the Middle East would be “fighting for their life: Pax Americana is on its way, which implies their annihilation.”

The ultimate target of the wars in the Middle East launched in the name of the “war on terror” were the “great powers” of Russia and China, as well as America’s erstwhile “allies” in the European Union. By controlling the heart of Eurasia, with its vital energy and transit links, the United States could regain its geopolitical hegemony by military means, even as its dominance over the global economy waned.

But as the United States came increasingly to rely on Al Qaeda-linked Islamist militias, first in Libya, then in Syria, the veneer of the “war on terror” wore increasingly thin. The pretense was effectively discarded in this year’s Pentagon National Defense Strategy document, which stated that “Inter-state strategic competition, not terrorism, is now the primary concern in US national security.”

Echoing this theme, former CIA Deputy Director Michael Morell commemorated yesterday’s anniversary of 9/11 with a Washington Post column titled, “We responded with urgency to 9/11. Now we need to respond as urgently to China.”

Morell argues that the US must prevent China from “seeking to become the most powerful and influential country in the world.” Throughout the article, Morell never explains what, if anything, the September 11, 2001 terror attacks have to do with China.

The column makes sense only if one sees the entire “war on terror” as a pretext for a series of neocolonial wars of aggression in the Middle East that have placed the US on a collision course with China and Russia.

Beijing and Moscow, for their part, see the American threats as deadly serious. Russia, which has worked to rapidly expand its nuclear arsenal, is in the midst of staging its largest military exercises in 37 years, involving some 300,000 troops, for the first time with substantial Chinese participation.

The efforts of the US to shore up its global position by military means through a series of ever-expanding wars have led to one bloody catastrophe after another. But Washington, the cockpit of global imperialism, has responded to every disaster by upping the ante. If this course brings it to the brink of war with a nuclear-armed power, Washington has made clear it is prepared to accept the consequences.

This eruption of American militarism is driven in large measure by domestic considerations. Amid the growth of working class struggles and a growing audience for socialism among workers and young people, the US ruling elite sees in war a means of enforcing “national unity” through internet censorship, attacks on the press and other dictatorial methods. As Morell notes, “National unity is essential as the United States responds to myriad threats, including Russia’s attempts to weaken us at home and abroad.”

The crisis-ridden Trump administration, for its part, sees war as a means of placating its domestic critics in the Democratic Party and the intelligence agencies, whose bitter faction fight with the administration revolves around demands that Trump take a more aggressive stance against Russia in Syria.

As the United States stands on the precipice of an offensive that could lead to a shooting war with a nuclear-armed power, the entire US political establishment has lined up in favor of military escalation. This includes the middle-class “left” periphery of the Democratic Party, such as the International Socialist Organization, which has consistently demanded a more aggressive US pursuit of regime-change in Syria.

No movement against war will come from any faction of this decrepit and reactionary political establishment. Rather, it must and will come from the working class. Throughout the United States and the world, workers are engaged in a series of bitter class battles, from teachers in Washington state to UPS workers nationwide, to airline workers in Europe. As they mobilize in struggle, workers must take up the fight against war as a central component of the struggle for a socialist future.