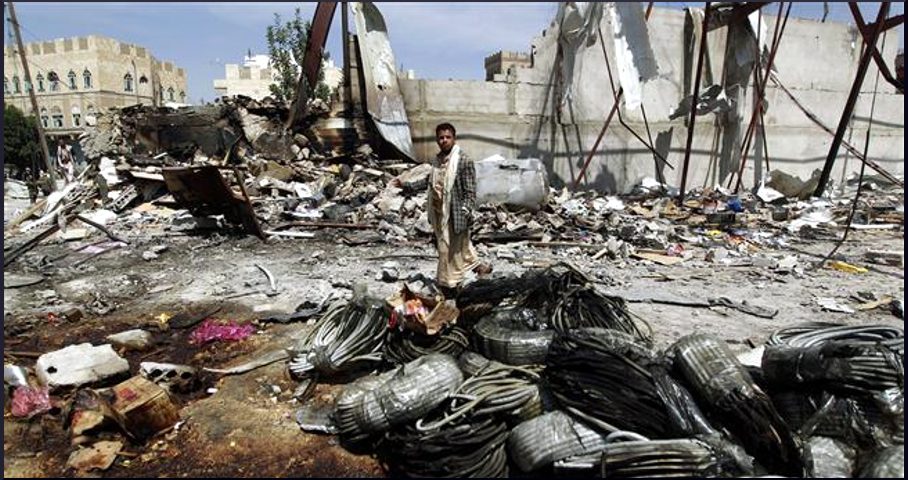 A Yemeni man walks amid the rubble of a food storage warehouse after it was targeted by Saudi airstrikes in the capital, Sana’a, on October 26, 2015. (AFP photo)

1,200+ Days of War & Bloodshed in Yemen
Imperialists and Saudi Arabia Hands Off Yemen!

by Azza Rojbi, originally published on Fire This Time

After a Saudi airstrike hit a water project in the Nushour area in the Sa’ada province Geert Cappelaere, the UNICEF (United Nations Children’s Fund) Regional Director in the Middle East and North Africa, stated, “UNICEF deplores in the strongest terms yet another attack on vital and lifesaving water systems in Yemen. A large water facility in Sa’ada, northwest of the country, came under attack this week. This is the third such attack on the same facility. More than half of the project is now damaged, cutting off 10,500 people from safe drinking water.” (July 24, 2018) Only few days later, the U.S. backed, Saudi-led coalition again targeted vital civilian infrastructure. According to the United Nations (UN)

“On 26, 27 and 28 July, airstrikes occurred near a reproductive health centre and public laboratory in Hodeidah and hit and damaged a sanitation facility in Zabid and a water station, which supplies the majority of the water to Hodeidah City.”

The Saudi-led coalition started its war on Yemen in March 2015, claiming to bring peace, stability and legitimacy to Yemen and the region. After over three years of bombing and war there is no peace in sight! Saudi Arabia’s government failed in their goal to bring Yemen to its knees and reinstate the deposed former pro-imperialist President Abdu Rabu Mansour Hadi, whose term has expired and who is currently hiding in Riyadh, Saudi Arabia.

Who is Behind the Crisis?

Life for Yemenis under the Saudi-led airstrikes and bombing is worsening every day. According to the UN, Yemen is “the world’s worst humanitarian crisis” where “75% of the population, 22 million people, need some form of humanitarian assistance and protection”. Saudi Arabia, its allies and the imperialist media is trying to portray this humanitarian disaster as the consequence of a “civil war” within the country. The reality is far beyond that, what is happening in Yemen is a war of imperialist countries and their puppet regime against an independent nation. Their goal is to kill the democratic aspirations of the Yemeni people and prevent the formation of a sovereign state in Yemen. Another fabricated lie used by imperialist media is to label the war in Yemen as a “front war for Iran” and to dismiss Yemenis resisting the Saudi-led aggression on their country as “Iranian puppets.” This helps the Saudi government to justify their atrocities committed in Yemen in the name of countering Iran’s meddling in the region.

However, sometimes even the mainstream imperialist media exposes their own lies. In an article published in the Washington Post in 2016 titled “No, Yemen’s Houthis actually aren’t Iranian puppets” the author states that “Tehran’s support for the Houthis is limited, and its influence in Yemen is marginal. It is simply inaccurate to claim that the Houthis are Iranian proxies.”

As the Saudi-led coalition approaches its 4th year of war in Yemen, it is important to look at who is really behind this humanitarian tragedy. Saudi Arabia and the United Arab Emirates (UAE) might be seen as the front players in this war, but they would have not been able to carry it out with the military, logistical and political support of the United States and its imperialist allies.

According to estimates from the Stockholm International Peace Research Institute (SIPRI), France is the world’s third largest arms exporter between 2013-17; with Saudi Arabia being its number one client. France is also the second largest exporter of arms to the UAE. In addition to selling them weapons, France provide Saudi Arabia and the UAE with training and logistical support remotely and on the ground in Yemen. On June 16, 2018, the French Newspaper Le Figaro cited two military sources in reporting that French special forces are present in Yemen assisting UAE forces.

France has also been a direct accomplice in imposing the naval blockade on Yemen. According to the publication “La Lettre de l’Océan Indien”, in March 2016, when Saudi Arabia’s navy fleet withdrew for maintenance, the French navy took up the role of maintaining the blockade against Yemen.

The UK is the second largest supplier to Stop the War Coalition in England, “Close to £3.8 billion worth of UK arms have been sold to the Saudi regime since the beginning of the war.”

In addition to providing Saudi Arabia and the UAE with billions of dollars’ worth of arms currently being used against the Yemeni people, the UK also provides training and targeting assistance to the Saudi military. In January 2016, Sky News reported that UK military experts are in Saudi Arabia working with the Saudi military in its Air Operation Centre.

Don’t let the government of Canada’s so called “human rights defender” image foul you. Canada is an accomplice to the crimes committed by the Saudi-led coalition in Yemen.

According to Canada’s National Post newspaper: “Saudi Arabia was the largest non-U.S. importer of Canadian-made military goods in 2016, receiving $142 million in exports — nearly 20 per cent of all Canadian military exports.”

The government of Canada has also moved ahead with a $15 billion arms deals to supply Saudi Arabia with light-armored vehicles (LAV) equipped with heavy guns and cannon.

Since day one, the United States has been supporting logistically, militarily and politically, Saudi Arabia in its war on Yemen. The U.S. has been providing the Saudi-led coalition with intelligence gathering support, mid-air refuelling for the coalition’s fighter jets, as well as training for ground troops.

A team of U.S. Army special elite forces called “Green Berets” were secretly deployed to the border between Saudi Arabia and Yemen to join the Saudi military in planning their ground and aerial attacks on Yemen.

The U.S. also continues to supply the majority of weapons and arms used to carry out the Saudi-led coalition bombing and blockade of Yemen. In the period between 2011-17, Saudi Arabia and the UAE were the two biggest U.S. military hardware and weapons buyers.

Other imperialist allies of the United States such as Italy, Germany and Spain have also supplied military hardware and weapons to Saudi Arabia, the UAE and other countries that are part of the Saudi coalition bombing Yemen.

In 2017, Saudi Arabia placed third in the world in military spending, totaling $69.4 billion. As well, the UAE has increased its military spending to $20 billion in 2017. Despite all this weaponry and the military and logistical support that the two gulf monarchies receive from their imperialist masters, they haven’t been able to defeat the resistance of the Yemeni people.

Peace-loving people around the world have the duty to join their voices with the Yemeni people and demand: