Amidst the outpouring of praise from all sections of the political establishment for Republican Senator John McCain, who died on Saturday, two statements stand out. 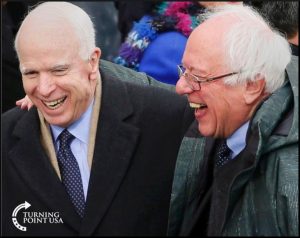 The first was from Vermont senator and former presidential candidate Bernie Sanders, who tweeted: “John McCain was an American hero, a man of decency and honor and a friend of mine. He will be missed not just in the US Senate but by all Americans who respect integrity and independence.”

The second was from Democratic Socialists of America member and New York congressional candidate Alexandria Ocasio-Cortez, who tweeted: “John McCain’s legacy represents an unparalleled example of human decency and American service. As an intern, I learned a lot about the power of humanity in government through his deep friendship with Sen. Kennedy. He meant so much, to so many. My prayers are with his family.”

Ocasio-Cortez posted with her tweet the editorial from the Washington Post on McCain’s death, “John McCain, the irreplaceable American,” which praised McCain for his work on “national defense and deterrence of foreign aggression” and for “[rising] above party politics to pursue what he honestly saw as the national interest.”

What, one is compelled to ask, are these two individuals, who present themselves as figures of the left and even socialists, talking about? What is McCain’s legacy of “human decency and American service?” What made him an “American hero?”

Was his human decency on display when he was dropping bombs on the Vietnamese people, or when he was acting as one of the earliest supporters of the 2003 invasion of Iraq, which led to the deaths of one million people? Was his heroism expressed in his call for the bombing of Iran, his visit with Islamic fundamentalist organizations spearheading the CIA-backed civil war in Syria, or his demands, up to his last day, for stepped-up aggression against Russia?

The list of countries McCain advocated bombing is a long one, and there is no war launched by the US that he did not support. Political positions have consequences, and McCain had the blood of many hundreds of thousands of people on his hands. A genuine socialist would not praise his “human decency,” but demand, were he still alive, his prosecution for war crimes.

The praise for McCain by Ocasio-Cortez and Sanders is a calculated political decision. It reveals everything about the politics of the Democratic Party and the particular role played by these figures and the organizations that promote them.

On the part of Sanders, his declaration of solidarity with McCain is in continuity with his own Democratic Party election campaign in 2016. Sanders proclaimed his support for the foreign policy of the Obama administration, including its wars in the Middle East, and said that a Sanders administration would utilize Special Forces and drone strikes—“all that and more.” After losing the primaries, Sanders endorsed Hillary Clinton, seeking to channel the social opposition reflected in support for his campaign behind the candidate of the military-intelligence establishment.

As for Ocasio-Cortez, her evolution is an example of the general rule of bourgeois politics that the deeper the crisis, the more rapidly political tendencies and individuals are exposed for what they really are. It is only two months since Ocasio-Cortez defeated incumbent Democrat Joseph Crowley in the primary election for the 14th Congressional District of New York.

How quickly this “socialist” has expressed her fidelity to establishment bourgeois politics! She has moved to distance herself from any association with socialism, backtracked on her previous criticisms of Israel, pledged her support for “border security,” stood beside Sanders as the latter endorsed the Democrats’ anti-Russia campaign, and now heaps gratuitous and obsequious praise on one of the most reactionary warmongers in American politics. And there are still two months to go before the election.

At the time of Ocasio-Cortez’s primary victory, the World Socialist Web Site wrote that

“anyone who suggests that her victory marks a shift to the left in the Democratic Party should be told, in no uncertain terms: Curb your enthusiasm! The DSA is not fighting for socialism, but to strengthen the Democratic Party, one of the two main capitalist parties in the United States.”

Ocasio-Cortez’s comments have drawn criticism from many who backed her campaign. However, those who may have been attracted to the DSA based on the impression that it is a socialist or anti-war organization should draw the necessary conclusions.

The Democratic Party is engaged in a ferociously right-wing campaign in its conflict with the Trump administration. Its focus is not on Trump’s fascistic policies or his own warmongering, but on the claim that Trump is insufficiently committed to war in the Middle East and aggression against Russia. The Democrats have utilized the death of McCain as part of a calculated strategy, elevating him—along with figures such as former CIA Director John Brennan—as political heroes.

They, along with the corporate media and the Republican Party establishment, are seeking to use McCain’s death as an opportunity to shift public opinion in favor of war and political reaction.

In the 2018 midterm elections, as the WSWS has documented, the Democrats are running an unprecedented number of former intelligence and military operatives as candidates. The promotion of groups such as the DSA is an integral part of this strategy.

“The politics of the ‘CIA Democrats,’” the Socialist Equality Party noted in the resolution passed at its Congress last month, “is not in conflict with, but rather corresponds to, the pseudo-left politics of the upper-middle class, as expressed in organizations such as the Democratic Socialists of America (DSA) and the International Socialist Organization (ISO).”

The role of Ocasio-Cortez, Sanders, the DSA and the ISO, is to give a “socialist” label to politics that is entirely in line with the right-wing, militarist and imperialist character of the Democratic Party.

The elevation of the DSA does not represent a movement toward socialism, but rather a defensive reaction by the ruling class against what it perceives to be an existential danger. The corporate-financial elite is well aware of polls that show growing support for socialism and opposition to capitalism among workers and particularly among young people. The DSA is therefore promoted by the media (the New York Times published yet another prominent article on Sunday boosting Ocasio-Cortez and the DSA) even as genuine left-wing and anti-war publications, above all the World Socialist Web Site, face ever more direct forms of Internet censorship.

The politics of the DSA and the broader pseudo-left has far more in common with the politics of McCain than it does with genuine socialism. There can be no question as to what role these organizations would play if brought into positions of power. A similar path has already been trod by the Left Party in Germany, which has implemented austerity measures and promoted the anti-immigrant policies of the far-right AfD, and Syriza (Coalition of the Radical Left) in Greece, which since coming to power in 2015 has implemented the brutal austerity measures demanded by the European banks.