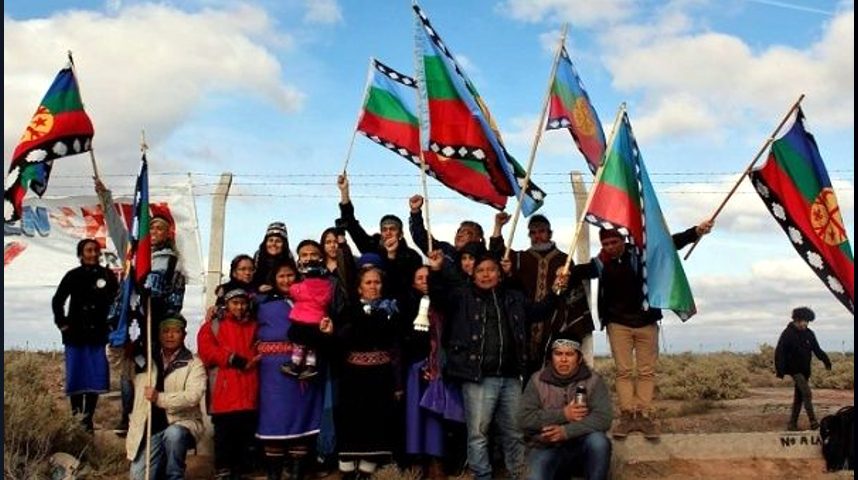 Mapuche people of Neuquen are part of the 60 organizations that oppose the U.S. base. | Photo: @pcayuqueo

from TeleSUR, July 12, 2018
The organizations led a caravan to the site where a U.S. base will be built to demand respect for Argentina’s territorial sovereignty.

In Argentina, political parties, social organizations, human rights groups, workers’ unions and Mapuches held a caravan to protest the installation of a United States “humanitarian” base in western city of Neuquen.

Under the banner “no to the yankee base in Neuquen” representatives of over 60 organizations travelled Tuesday to the site where the base will be built. They demand that the national and provincial government stop the construction of what they call a “military base” and uphold territorial sovereignty.

The base, under the name “Emergency Operating Committee” was announced by government officials as a new office for “Civil Defense.” Construction is financed by the U.S. Southern Command and it will function near the city, “next to all the oil resources,” councilman Francisco Baggio said.

The structure will have an evacuation center for possible catastrophes, and medical care center. However, the people who oppose construction claim the base is a response to the “nuisance workers and the people can demand the recuperation of gas and oil.”

The document signed by the 60 organizations affirms that

“the base is presented as humanitarian aid (to avoid) being called a military base, which would require approval of Argentina’s Congress.”

“In the case they wanted to protect us from catastrophes it would be logical for the base not to be installed in the Neuquen area, which is not a zone of volcanic eruptions or earthquakes,” the document contests.

“we must be mobilized. We are going through critical moments but what’s coming is worse.This policy of inhumane capitalist plunder now has all the favor and the support of the government.”

“The base comes to fulfill a strategic intelligence objective of the U.S. military, that seeks to protect their corporate interests. The Patagonia is an inexhaustible source of resources and the companies that exploit those resources are from the U.S. That’s what they are here to protect,” Nahual added.