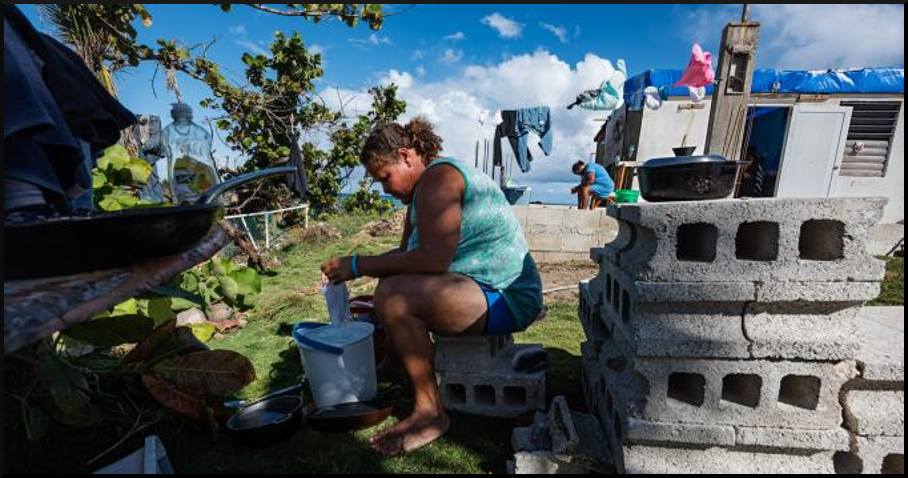 Photo: Yasmin Morales Torres, 41, washes laundry by hand in her yard in Playa El Negro, a neighborhood in the town of Yabucoa. As of March the area had still been without power since the storm.

first published on Fire This Time,

Interview by Fire This Time with Puerto Rican revolutionary actvists Jocelyn Velázquez and Rogelio Maldonado with the Socialist Front of Puerto Rico. Jocelyn and Rogelio were in New York in June to participate at the meeting of the United Nations Special Committee on Decolonization and they spoke on the situation in Puerto Rico at several events in New York. This interview took place in San Juan, Puerto Rico.

FTT: You have just returned from the meeting of the UN Special Committee on Decolonization in New York, please tell us what this meeting was about and what has been achieved regarding the Puerto Rican independence movement?

We, independentists, from the beginning, have said that what the U.S. claimed to the United Nations is a farce, it is a lie, that the colonial problem has not been solved, that Puerto Rico continues to be a colony and that the “Free Associated State” is simply a different way of calling a colony but that the colonial characteristics have not disappeared. Despite our opposition, Puerto Rico was removed from the nations listed as colonies and the U.S. no longer has to report to the UN about the situation in Puerto Rico. So we, the independentists, for the past few years consecutively, have attended the United Nations meetings requesting that our case be taken to the plenary of the United Nations and that they include Puerto Rico in the list of colonized nations so that the U.S. is forced to be accountable in front of the UN and resolve the situation.

FTT: How would you describe the situation and living conditions after hurricanes Irma and María in Puerto Rico? I refer especially to these days when U.S. officials are awarding medals themselves for the “fantastic” work they have done in Puerto Rico. Telling lies and trying to minimize their failures and the lack of support after the hurricane, including the lie about the death toll. We know that thousands of people died from Hurricane Maria, but they have tried to hide it. How would you describe the U.S. government and President Donald Trump’s actions towards the Puerto Rican people?

Jocelyn: For us, the situation since after the hurricane has not improved much. There are still thousands of communities that do not have access to electricity; there are still families whose roofs have not been repaired. Our great concern is that hurricane season has already returned to the island, which means that these families who have not been able to repair their homes will be in the middle of extreme weather conditions without having the ability to protect themselves. The government has also reduced the number of shelters in schools, which are the places that people have been seeking help when their house is affected by adverse weather events.

So we are deeply concerned because the country has not recovered from the last natural disasters, because new extreme environmental situations are likely to happen, and we are not adequately prepared to confront them. During this time of our misfortune, the U.S. government has become an obstacle to our recovery. Instead of bringing aid to the citizens, what the U.S. brought was weapons, what they brought was repression, political persecution, they have restricted access to aid and restricted the support of international countries, for example: the support of Cuba, of Venezuela and many other countries that have expressed their desire to bring medical brigades, to bring energy brigades to help Puerto Rico. Therefore the presence of the U.S. throughout this crisis has been detrimental to us Puerto Ricans, not allowing us to rise as people. The collaboration between the colonial government and the imperialist government of the U.S. is reflected in the figures of those killed by the hurricanes. While the government here claimed for months that there was fewer than a hundred dead, studies and our own experience clearly showed us that the death toll was in the thousands..

Puerto Rico is the best example of what colonialism is, the damage it does to a country and how in a time of crisis, this colonial model leads its citizens to further misery..

FTT: What are the immediate needs of Puerto Rico after Hurricane Irma and Maria considering we are now about ten months after Maria?.

Jocelyn: We continue with the problems of loss of electrical power, there are thousands of communities, families that do not have access to electricity. There are communities that have neither water nor electricity; there are communities where the houses have not yet been repaired, there are people who have not yet been able to repair their houses because they are still waiting to receive money from the loans that FEMA gave. In addition to that, schools are being closed which limits the number of shelters for people to use..

The government talks about a financial crisis, their solution to the crisis is to close hospitals, to reduce pensions, to close schools as I mentioned earlier, to take away the rights of workers. So we’re going to have an impoverished working class that has not recovered from the first impact of a hurricane within another hurricane season which starts soon. What it tells us is that as a country, if we couldn’t deal with a disaster situation like the one we experienced last year, the next catastrophe could be greater..

FTT: How would you describe the political condition in Puerto Rico especially after Hurricane Maria? I read that there has been more and more repression and suppression of democratic rights. How do you see the current political situation?.

Jocelyn: The government since before Maria was talking and saying that they have no money. After the hurricane and when people were so beaten by what had happened, the government has seen a good opportunity to implement a lot of new measures, which they would not have been able to implement otherwise. As I told you before, closing down schools used as shelters, reducing working hours, cutting pensions, closing hospitals and the list goes on.

The people’s response has been to defend themselves, to take to the streets, to protest in communities, to protest in schools, to demand more humanity, more compassion and more assistance for their needs from the government. But the response of the state in collaboration with the U.S. government has been consistent, repressing, persecuting, criminalizing the protests, and imprisoning. It was a week ago that a comrade was sentenced to three years in prison and three years of probation in a federal jail. We currently have a dozen comrades with cases in the courts.

The situation is very worrying, the repression that activists are facings is also very worrying, but there is also a climate of resistance and struggle that gives us a lot of hope.

FTT: Cuba has always been a friend and a supporter of the Puerto Rican people and their struggle for liberation and independence. How would you describe the role of Cuba last week in the UN Special Committee on Decolonization? I have read that Cuba presented a resolution to pass in the general assembly to vote on the independence of Puerto Rico.

Jocelyn: Historically, while other countries took a long view of the situation in Puerto Rico, Cuba has been consistent in bringing resolutions to the UN. This year it was with a few other countries, sometimes they have presented alone, but they have always continued to seek the support of others and each time have successfully added more countries to the resolution.

FTT: What would you suggest activists around the world, incuding Canada, do to help the people of Puerto Rico fight for their independence?

Jocelyn: What we have always raised is that we need our voices to be reproduced, that they generate an echo, that other activists from all over the world take our cause to their country and explain to their people what is happening in Puerto Rico. This means supporting us with their soul and solidarity, to create the necessary pressure so that the United Nations is forced to take our case to the General Assembly.

Also because our case is the example of what imperialism means, what capitalism means – We are the best example of the disaster that has been created by the capitalist system, an imperialist system that has been imposed on the people of Puerto Rico. Puerto Rico is the example for humanity of the disaster that capitalism creates and why it has to be eradicated from the world so that humanity can survive. Our request is always on the one hand the denunciation of our situation and the echo of our cause, on the other that our example is used to show the effects of capitalism, colonialism and imperialism on humanity.

Mike Larson is an organizer with MAWO (Mobilization against War and Aggression), Vancouver.