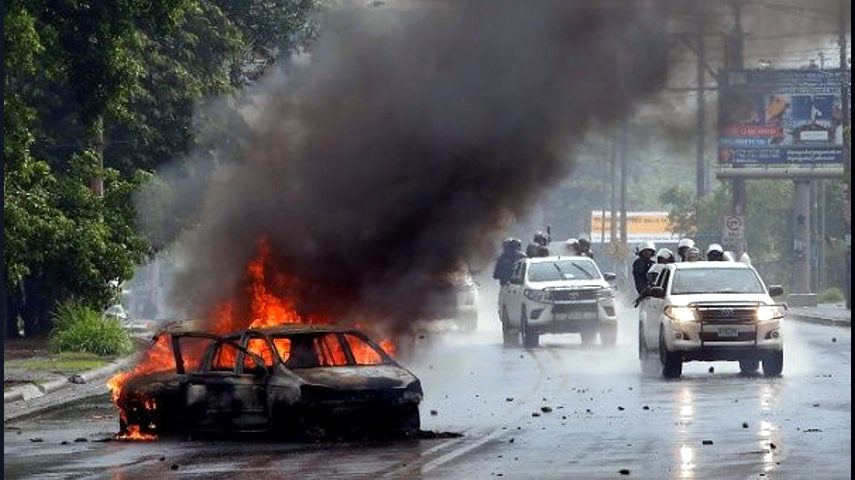 Riot police officers travel past a burning car during clashes with the anti-government protesters in Managua, Nicaragua May 28, 2018. | Photo: Reuters

In his 2005 Nobel address, British playwright Harold Pinter wrote of U.S. foreign policy that the U.S. rarely invades its target countries, preferring to infect the country with “a malignant growth and watch the gangrene bloom.”Then, when its local allies succeed in taking power, the US president of the day goes on camera to declare “Democracy has prevailed.”

Talking about the last decades of the 20th century, Pinter went on to say of U.S. crimes during those years that, for Western public opinion,

“Nothing ever happened. Even while it was happening it wasn’t happening. It didn’t matter. …..It’s a brilliant, even witty, highly successful act of hypnosis.”

U.S. policy remains unchanged, but tactics have moved on. In Latin America, first Venezuela and now Nicaragua have been proving grounds for a new variation on Pinter’s summary of U.S. intervention. Now it is of supreme importance for everyone to see that things do indeed happen, happen as they happen and really do matter a great deal. U.S. interventionist strategy has evolved now to accuse its victims of their own murders. Target governments are accused of destroying their own economies, attacking their own health systems and schools and burning down their own public offices. It is all savagely witty.

In Venezuela, those tactics, have been constant since 2014, but intensified even more from April to July 2017, in a campaign of vandalism and terror blamed by Western media on the government of President Nicolas Maduro. Opposition extremists set fire to over 20 people during that time, but the images were projected in Western media to falsely reflect government repression rather than the reality of barbaric opposition violence. In April 2017, despite having the support, tacit or explicit, of most member countries of the Organization of American States, Venezuela announced its withdrawal from that body after abuse of the OAS rules by Secretary General Luis Almagro. Almagro justified his attacks on Venezuela based on grossly biased reports from the Inter American Commission for Human Rights.

Last Friday, the OAS Permanent Council received an equally absurdly biased IACHR report on Nicaragua. The report consisted entirely of recycled false opposition propaganda, completely omitting the Nicaraguan government’s account of events. For the IACHR, the deaths of nine police officers and the wounding of over 200 more somehow resulted from police repression of peaceful protests.

Reporting on abuses by non-existent government paramilitaries and phantom “para-police”, the report completely omitted wholesale destruction by opposition paramilitaries and allied delinquents of public and private property, including ambulances and health infrastructure. The resolution approving the IACHR report was supported by the U.S. and its closest allies, just a third of the OAS member States.

On Saturday June 23rd, violent opposition gangs murdered a female municipal worker in Masaya and killed a one year old child in Managua. Both deaths resulted from attacks by opposition armed gangs on municipal workers clearing the gangs’ makeshift barricades to allow free circulation of traffic. Even those deaths the opposition media and NGOs are blaming on the government and the police. Commenting on this reversal of the facts, FSLN international relations representative, Carlos Fonseca Terán noted in a television interview,

Fonseca also recalled how during the visit last May by IACHR Executive Secretary Paulo Abrão to Nicaragua, an armed opposition gang in Managua attacked unarmed Sandinista supporters returning from a peace march. The social media immediately reported that the Sandinistas were attacking peaceful opposition student protesters.

Paulo Abrão arrived at the scene, only to rouse the opposition supporters saying, as Fonseca recalls,

“ ‘Continue the struggle, you are in the right, your struggle is a just one, we support you!’…and that’s been recorded and circulated. it should provoke an international scandal or lead to the IACHR removing that guy for the sake of the organization’s prestige or at the very least to maintain the appearance that they are supposed have as ‘experts’, but no one is even bothered about that. So it’s self-evident these people aren’t coming to investigate anything.”

Despite failing to secure condemnation of President Ortega’s Sandinista government, Nicaragua’s political opposition regard last Friday’s theatrical events in the OAS as a victory. Within Nicaragua itself, the process of national dialogue continues, the government is progressively and cautiously removing the roadblocks and barricades around the country, finally restoring national economic life to normality.

Majority opinion in Nicaragua is critical of the Catholic Church bishops mediating the national dialogue for their clear bias in favor of the political opposition. Evangelical churches in particular have complained that they are not represented in the national dialogue despite serving over half the population professing religious belief.

Opposition representatives in the national dialogue have dropped their demand for President Ortega to resign and now aspire most urgently to bring forward the presidential elections currently scheduled for 2021. The OAS have already been working with the Nicaraguan authorities for almost two years now on reforms to the country’s electoral system for which a schedule has also already been agreed.

It remains to be seen what the eventual outcome of the dialogue process will be. But the opposition’s attempted coup d’etat has clearly failed and they are obliged now to operate within the current legal institutional framework defined by Nicaragua’s Constitution.

However, for the foreseeable future opposition violence is likely to continue, with the aim of creating a constant climate of fear and hatred fed with systematic media falsehood endlessly blaming their violent crimes on the government. Over the next couple of months, the IACHR team in Nicaragua may collaborate in that process, continuing their pro-opposition antics.

But they will be under scrutiny and subject to the superior professionalism and experience of the country’s Commission for Truth, Peace and Justice sworn in on May 6th by the National Assembly. For the government, the objective has to be a return to rationality among the general population who are trapped in a kind of collective psychosis.

As Carlos Fonseca Teran puts it,

“their minds and souls are being attacked by a machinery scientifically designed to achieve that…. as part of the People and defenders of the People’s interests, we cannot fall into the mistake of seeing ordinary people who are trapped in this psychological warfare as blameworthy, or as our enemies.

They are not! To the contrary they are our people and we have to continue defending them.” He adds, “It’s like when a left wing party loses elections, that isn’t the fault of the people either, it’s that the revolutionary forces were not up to achieving their objective. It’s not that the People have to measure up to us. It’s we that have to measure up to the People.”