See “My Peace Travels Around Europe”  Part 2: Civil Resistance at Ramstein,   Part 3: From Belgium: the Lands the Congolese Made Rich, Part 4: No to NATO; Yes to NHS

It’s a beautiful evening here in Kaisaerslauten, a city of some 100,000 in southwestern Germany. There’s a light breeze blowing, gently nudging the thousands of multi-colored flowers that seem to line every street. Couples, young families and older folks are strolling through this city whose beginnings go back to the time of the Roman Empire.

And tomorrow. thousands of people are expected to gather here and attempt to block the entrance to the U.S. Ramstein Air Force Base. I’ll be one of them.

Ramstein is one of the largest of the Pentagon’s 800 military bases established in more than 70 countries. South Korea has the largest number (could this be why North Korea is a little suspicious of U.S, intentions?). Japan is number two, and Germany comes in third. 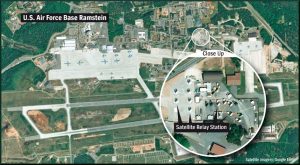 Ramstein serves as headquarters for the U.S. Air Forces in Europe, Air Forces Africa and also NATO Allied Air Command. The military base is really huge, with some 54,000 military personnel, plus their families, which means this U.S. base pretty much dominates this German town. In fact, German officials and politicians are not allowed to enter the base without permission from the U.S. commander.

But, just like with the Navy in Norfolk and Virginia Beach, the base is an important source of local employment, business contracts and trade, which is probably why the Catholic Church where around 40 protest organizers have been meeting this week came under heavy local pressure not to allow us to gather there. But the church stood its ground and there have been no problems – so far.

The reason the German peace movement has targeted Ramstein is not only because of its massive size, but because of the critical role it plays in the Pentagon’s strategy of fighting wars using pilotless drones. These expensive little machines can drop bombs on targets all over the world, with no threat to U.S. lives, and so no risk of stirring up unpleasant antiwar feelings back home.

It’s nice, clean warfare, in which the only people who die have brown skins. And if the intended target happens to be at a wedding, a funeral or praying in a mosque on Friday night, then there might be what the Pentagon quaintly calls “collateral damage” – a very sanitized word that seems obscene when applied to a lifeless child torn apart by a bomb we paid for with our taxes.

The drones do have human pilots, but they work in air-conditioned buildings back in the States. The pilots send instructions to Ramstein, where they are then routed to the many drone bases around the world. No Ramstein, no drones. And that is why there have been huge annual protests here.

When the base’s key role in drone warfare first came to light in 2015, the German government claimed it hadn’t been informed about this function of the U.S. base. The reports were later supported by data provided by whistleblower Edward Snowden and investigative reporter Glenn Greenwald from classified documents from inside the U.S. administration.

I’m here representing the United National Antiwar Coalition, which the Virginia Defenders helped found back in 2010. I’ve been meeting lots of German peace activists, as well as folks from Italy, Spain, South Korea, France, Ireland, the United Kingdom and several from the U.S., including Ann Wright, the former U.S. Army colonel and State Department official now known worldwide for her antiwar activities. She’ll be a featured speaker at the main rally outside the base tomorrow.

Also here are Pat Elder, a longtime antiwar activist from Maryland who has done some incredible work countering military recruitment in our public schools. And Dave Webb from the United Kingdom, who works with the U.S.-based Global Network Against Weapons and Nuclear Power in Space. And John Lannon, a professor at Ireland’s University of Limerick, who will be a key organizer of an international conference called to oppose U.S. and NATO foreign military bases that will take place this November in Dublin.

This week’s peace activities are being sponsored by the German organization “Stopp Air Base Ramstein.” Beginning on June 23, there have been discussions, workshops and a “peace camp” that reminds me of Occupy Richmond, with its many small tents and communal spirit. Today there was an all-day meeting at which Ann, Pat, John, Dave and I were among the many speakers. At the end of the meeting the organizers released a statement calling on the European Union to open all its borders to refugees, arguing that it has been the U.S. and NATO wars in North Africa and the Middle East that have caused the refugee crisis in the first place. The right-wing in Europe has seized on the refugee crisis to whip up hatred of immigrants, much like the Trump regime is doing in the U.S.

Tonight there’s a large public event held at the Reconciliation Church Kaiserslautern. And then the highlight of the week will be a large demonstration and rally tomorrow, followed by a mass blockade in front of the main entrance to the base, followed by a cultural event with a party in the peace camp. (See https://www.ramstein-kampagne.eu/…/stopp-airbase-rastein-2…/

So what am I doing her, thousands of miles from home, when I could be protesting any number of injustices back in Richmond? Well, it’s because all these things are related. Like the Rev. Martin Luther King Jr, said, “Injustice anywhere is a threat to injustice everywhere.” That saying is featured on the front page of the current issue of The Virginia Defender. 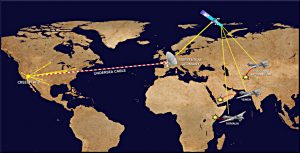 Today the U.S. is openly at war in at least seven countries in the Middle East and Africa: Iraq, Syria, Afghanistan, Yemen, Pakistan, Libya and Somalia. It’s conducting covert wars in other countries, from the Philippines in Asia to Mali and Niger in West Africa. It carries out provocative military exercises on the very borders of Russia. All this is in the name if “national security,” although there are no Russian bases in Canada, no Chinese ships off the coast of San Francisco, no joint North Korean-Mexican maneuvers in the Gulf of Mexico.

And man, are these wars expensive! The U.S. military budget is larger than that of the next seven or eight countries combined, and that includes both China and Russia. Military spending sucks up half our federal tax dollars. (They tell us it’s only 25 percent, but the Defense Department budget doesn’t include nuclear weapons, which come under the Department of Energy; or care for the hundreds of thousands of veterans, which comes under the Veterans Administration; or interest payments on the national debt – largely the result of borrowing money to pay for past wars. Those payments are now nearly equal to the Defense Department budget.

So when they tell you there’s no money to fix Richmond’s decaying public schools, no money for more bus routes, no money to create public jobs at living wages and that we’re running out of money for Social Security and Medicare, please remember where half your federal tax dollars are going. For war.

I’ll be on the road here in Europe for the next couple of weeks, trying to learn as much as I can about the progressive movement here and how activists are addressing poverty, racism and war. I’ll post my reports here as often as I can.

Meanwhile, if you’d like to help support this work, please think about kicking in a little something for travel expenses.

You can do this at: unacpeace.org.