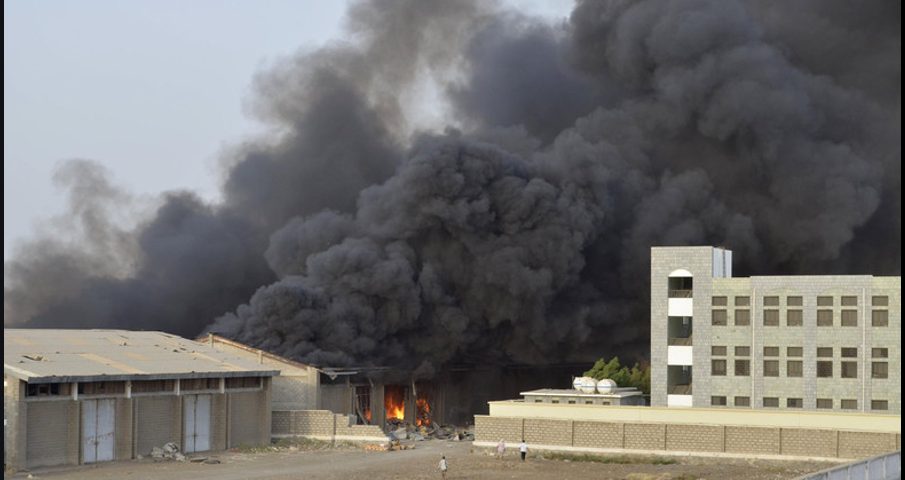 Editor’s note: This article describes an emerging crisis within a long term catastrophe for the people of Yemen.   Ex President Abd Mansur Rabbuh Hadi and the nephew of Ali Abdullah Saleh, referred to in teh mainstream press as representing the ‘Government of Yemen’ are competing for a puppet throne, but have no legitimacy on the ground in Yemen.

Forces led by Saudi Arabia and the United Arab Emirates (UAE) launched a long-anticipated siege of Yemen’s Red Sea port city of Hodeidah Wednesday, in what is certain to be the bloodiest battle since the Saudis began bombing the impoverished Arab country in March 2015.

The charity group, CARE International, reported 30 airstrikes in the space of a half an hour Wednesday morning, while warships off Yemen’s coast conducted a naval bombardment.

The military operation is being carried out in defiance of warnings from both the United Nations and multiple aid groups that hundreds of thousands of civilians in the crowded city are in danger of losing their lives. They have also warned that the devastation of the port of Hodeidah, which receives an estimated 70-80 percent of Yemen’s imports, including food, fuel and medicine, threatens millions more with starvation in a country where 22.2 million depend on food aid and at least 8.4 million are already facing famine.

Carrying far greater weight than these humanitarian warnings, however, was the approval provided by Washington. Over the past week, a report surfaced that the Trump administration had ordered the Pentagon to review plans for a direct US participation in the siege of Hodeidah. This was followed by a perfunctory statement last week, given anonymously by a spokesperson for the White House National Security Council, that the US opposed any military action “likely to exacerbate the dire humanitarian situation” in Yemen.

On Monday, however, Secretary of State Mike Pompeo issued a statement described as a “blinking yellow light,” i.e., proceed with caution. He allowed that he was “closely following” the situation in Hodeidah but failed to make any appeal to Saudi Arabia or the UAE to refrain from attacking the city. Instead, he declared:

“I have spoken with Emirati leaders and made clear our desire to address their security concerns while preserving the free flow of humanitarian aid and life-saving commercial imports.”

And on Wednesday the Wall Street Journal, citing Pentagon sources, reported that the “US military is helping its Gulf allies develop a list of targets,” supposedly with an aim “to minimize the number of civilian casualties.”

Similar claims were made in relation to US targeting in the cities of Mosul, Iraq and Raqqa, Syria, which were reduced to rubble by US bombs and shells, while the number of dead and wounded ran into the tens of thousands.

The siege of Hodeidah, a city of 600,000 people, may well eclipse even those US war crimes.

“A military attack or siege on Hodeidah will impact hundreds of thousands of innocent civilians,” the UN humanitarian coordinator in the country, Lise Grande, warned in a statement on Friday. “In a prolonged worst case, we fear that as many as 250,000 people may lose everything—even their lives.”

The British government of Prime Minister Theresa May, which like the Trump administration and the Obama administration before it, has backed Saudi Arabia and the UAE with massive arms sales, was clearly warned in advance by the UAE of the impending siege, passing on an advisory to British-based aid groups late last week to evacuate the city.

The Red Cross, Care, Doctors Without Borders (MSF) and other groups have pulled their personnel out of the port city, as has the United Nations. These evacuations, together with the bombing and shelling, have brought the distribution of food to Yemen’s starving population to a halt.

More than 13,000 Yemenis have been killed since Saudi Arabia began its bombing campaign over three years ago in a bid to topple the government led by the Houthi rebels and to reinstall the US-backed puppet regime of President Abd Rabbuh Mansur Hadi.

Hadi, who spends most of his time in the Saudi capital of Riyadh, made a rare trip to the UAE capital of Abu Dhabi Tuesday on the eve of the full-scale attack on Hodeidah.

According to the Middle East Eye website, the UAE strong-armed Hadi into supporting the attack in order to lend the military operation a thin veneer of legitimacy. Hadi had previously condemned the UAE for pursuing its own interests in Yemen, backing southern separatists and seeking to secure for itself Yemeni ports and islands in order to control the strategic Bab al-Mandeb Strait linking the Red Sea and the Gulf of Aden, through which most of the maritime trade between Europe and Asia passes.

While UAE troops are on the ground—a number of whom have been killed in the operation—and Saudi planes are providing air support, a force made up of Yemeni mercenaries is led by Tareq Saleh, the nephew of former Yemeni President Ali Abdullah Saleh, who ruled the country for over two decades before being forced out by a mass revolt in 2012. In 2015, the ex-president had allied himself with the Houthis, but two years later shifted his allegiance to the Saudi-led forces, only to be killed by Houthi militiamen last December. There is little doubt that his nephew is now pursuing his own ambitions to take over the country.

A statement was issued in the name of Hadi’s regime declaring,

“The liberation of Hodeidah port is the start of the fall of the Houthi militia and will secure marine shipping in Bab al-Mandeb strait and cut off the hands of Iran, which has long-drowned Yemen in weapons that shed precious Yemen blood.”

The statement was clearly aimed at identifying the bloody military operation with US imperialism’s aims in the region. Both the Saudi and Emirati rulers and Washington have claimed that the port of Hodeidah has been used by the Houthis to import arms from Iran, but no evidence has been presented to support this allegation.

From both Riyadh’s and Washington’s perspective, however, the rule of Yemen by any regime that is not a puppet of US and Saudi interests is unacceptable and would weaken the anti-Iranian axis that US imperialism has forged in the region.

Before the siege of Hodeidah began, the International Crisis Group warned that such an operation would be

“bloody, prolonged and leave millions of Yemenis without food, fuel and other vital supplies.”

“Any attack on or significant, long-term disruption of operations of the port will have catastrophic consequences for the people of Yemen,”

“If the port closed, even for a day, then the number of people at risk of famine will increase because no food will come into the country.”

“With this assault, [children] are now suffering more hunger and death,” Anas Shahari, a spokesman for Save the Children, told Reuters. He said that some 300,000 children would lose access to food, water and medicine. Describing the conditions when he visited Hodeidah three months ago, he added,

“I could see children who are hungry, children who are on the streets with their ribs sticking out, babies unable to cry because they are so malnourished. That was the situation before, and now it is going to get worse.”

The near-genocidal war against Yemen has been waged since its outset with indispensable aid from Washington, first from the Obama administration, which sold Saudi Arabia and the UAE the warplanes and munitions to slaughter civilians, providing mid-air fueling to their jets to assure round-the-clock bombing and setting up a joint US-Saudi command to render intelligence and logistical support.

Since then, under Trump, special operations troops have been deployed with Saudi forces in the war against Yemen and US support for the war on the Yemeni people has been intensified in the context of the preparation for military confrontation with Iran. President Trump placed this on the agenda through his unilateral May 8 abrogation of the nuclear agreement reached in 2015 between Tehran and the major powers.

While the Trump administration is portraying the US president’s Singapore summit with North Korea’s Kim Jong-un as a de-escalation of global tensions, the predatory face of US imperialism finds its naked expression in Yemen, where the White House and the Pentagon are prepared to sacrifice the lives of millions in pursuit of hegemony against its regional and global rivals.

Photo from version of this story on CounterCurrents Blog

Bill Van Auken (born 1950) is a full-time reporter for the World Socialist Web Site, and resides in New York City.   Van Auken is a politician and activist for the Socialist Equality Party and was a presidential candidate in the U.S. presidential election of 2004, announcing his candidacy on January 27, 2004.