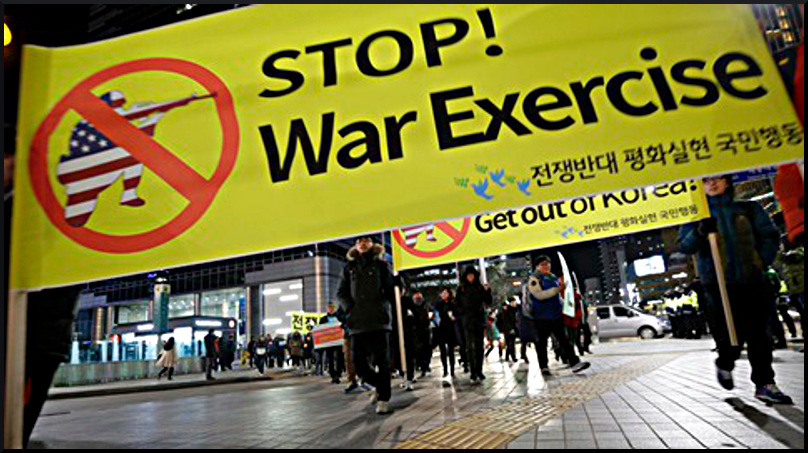 “The psychopathology of white supremacy invisibilizes the absurdity and illegitimacy of the United States being in a position to negotiate the fate of millions of Koreans.”

The critics had already signaled their strategy for derailing any meaningful move toward normalizing relations between the United States and North Korea. Right-wing neoliberals from CNN, MSNBC and NPR are in perfect alignment with the talking points issued by U.S. Sen. Chuck Schumer (D-NY) and the Democrat Party that took the position that anything short of the North Koreans surrendering their national interests and national dignity to the United States was a win for North Korea.

For much of the foreign policy community, corporate media pundits and leaders of the two imperialist parties, the issue is North Korean de-nuclearization. But for the people in Korea and throughout the global South, the real issue has always been the unfinished business of ending the war and beginning the de-colonization of the Korean peninsula.

The interrelated issues of respecting the dignity and sovereignty of the North Korean nation and engaging in an authentic process of de-colonization are precisely why the U.S.-North Korean initiative will fail without a major intervention on the part of the people in the United States demanding that their leaders commit to diplomacy and peace.

“The threat of North Korea allowed the United States to continue a physical presence right at the underbelly of China.”

There should be no illusions about U.S. intentions. If U.S. policymakers were really concerned with putting a brake on the North Korean nuclear-weapons program, they would have pursued a different set of policies. Such policies would have created the necessary security conditions to convince the North Koreans that a nuclear deterrence to the United States was unnecessary.

The fact that those conditions were not created were less a result of the evil intentions of the North Koreans. than it reflected the need to maintain the justification for continued U.S. military deployment in South Korea and in the region. Being able to point to North Korea as a threat to regional security has provided the justifications for U.S. power projection in the region and the ever-expanding U.S. military budget.

With the growing power of China over the last few decades, the threat of North Korea allowed the United States to continue a physical presence right at the underbelly of China. That is why the “agreed framework” under Clinton was not implemented and then jettisoned by the Bush administration. It is also why the Obama administration’s so-called strategic patience was really about a series of increasingly provocative military exercises and no negotiations.

Full Spectrum Dominance and the Psychopathology of White Supremacy

Korea has historically played a significant role for the U.S. imperial project since the end of the Second World War.The emergent forces U.S. President Dwight Eisenhower identified as the military/industrial/complex are still present, but are now exercising hegemonic power, along with the financial sector within the U.S. state. Those forces are not interested in a diplomatic resolution of the Korean colonial question because their interests are more focused on China and maintaining U.S. regional hegemony in East Asia. The tensions in Korea have not only provided them the rationale for increased expenditures for various missile defense systems but also for bolstering public support for the obscene military budgets that are largely transferred straight to their pockets.

That is why the historic record is replete with the United States sabotaging negotiated settlements with the North, but then pointing to North Korean responses to those efforts as evidence of North Korean duplicity.

“The historic record is replete with the United States sabotaging negotiated settlements with the North.”

In addition to the material interests and hegemonic geopolitical objectives, the social-psychological phenomenon of inculcated white supremacy is also a factor and has buttressed imperial policies toward that nation for years.

For example, the psychopathology of white supremacy invisibilizes the absurdity and illegitimacy of the United States being in a position to negotiate the fate of millions of Koreans. The great “white father” and savior complex is not even a point of contestation because it is not even perceived–the rule of whiteness through the dominance of the Western capitalist elite has been naturalized.

Therefore, it is quite understandable that for many, the summit is the space where the North Koreans are essentially supposed to surrender to the United States. It is beyond the comprehension of most policymakers and large sectors of the public that North Koreans would have ever concluded it is not in their national interest to give up their defenses to a reckless and dangerously violent rogue state that sees itself beyond the law.

“It is inevitable that the Trump administration—like the Clinton, Bush, and Obama administrations—will mis-read the North Koreans.”

As U.S. Sen. Lindsey Graham (R-SC), the good old boy from South Carolina, argues “The only way North Korea will give up their nuclear program is if they believe military option is real.”

But as Kim Kye Gwan , North Korea’s first vice minister for foreign affairs and former nuclear-program negotiator pointed out in relationship to the reasons why North Korea stayed with the process:

“The U.S. is miscalculating the magnanimity and broad-minded initiatives of the DPRK as signs of weakness and trying to embellish and advertise as if these are the product of its sanctions and pressure.”

Unfortunately, the white-supremacist world-view renders it almost impossible to apprehend reality in any other way. That is why it is inevitable that the Trump administration—like the Clinton, Bush, and Obama administrations—will mis-read the North Koreans.

The North Korea issue is a classic example of why it is impossible to separate a pro-peace, anti-war position from the issue of anti-imperialism. The concrete, geopolitical objectives of U.S. imperialist interests in the region drives the logic of regional dominance, which means peace, de-colonization and national reconciliation for Korea are counter to U.S. interests. And while we must support the U.S. state’s decision to halt military exercises, we must recognize that without vigorous pressure from the people to support an honest process, the possibility of conflict might be ever more alive now as a result of the purported attempt at diplomacy.

“Peace, de-colonization and national reconciliation for Korea are counter to U.S. imperial interests.”

The nature of the North Korean state is not the issue. What is the issue is a process has begun between the two Korean nations that should be respected. Therefore, de-nuclearization should not be the focus—self-determination of the Korean peoples must be the center of our discussions. On that issue, it is time for activists in the United States to demand the United States get out of Korea. The peace and anti-war movement must support a process that will lead to the closure of U.S. military bases, the withdrawal of U.S. troops and the elimination of the nuclear threat.

In short, U.S. based activists must support an end to the Korean war and the start of the de-colonization of South Korea.

Ajamu Baraka is the national organizer of the Black Alliance for Peace and was the 2016 candidate for vice president on the Green Party ticket. He is an editor and contributing columnist for the Black Agenda Report and contributing columnist for Counterpunch. His latest publications include contributions to “Jackson Rising: The Struggle for Economic Democracy and Self-Determination in Jackson, Mississippi”. He can be reached at: Ajamubaraka.com