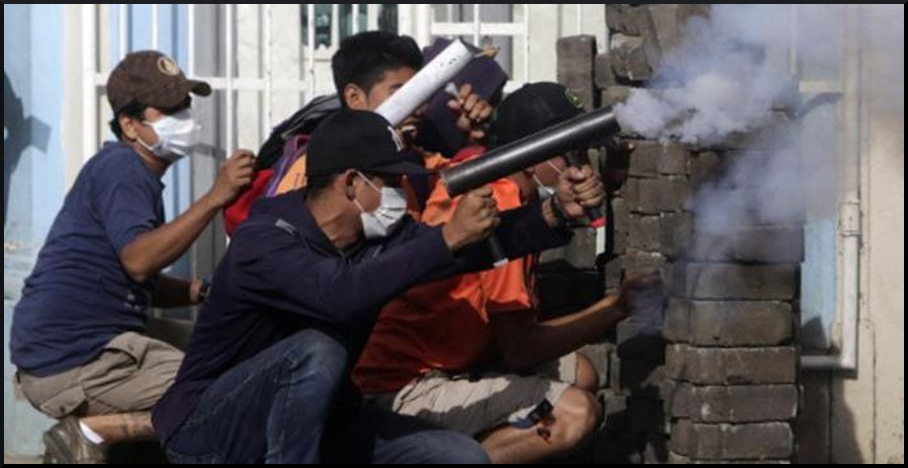 Above: An anti-government demonstrator fires a home-made mortar during clashes with riot police at a barricade in the town of Masaya, 35km from Managua on June 9, 2018. — AFP

I am sorry to be posting again as I do not wish to monopolize the space. I only hope this will be read and what I have to say will be considered as a possibility.

First, let me say I am in central Granada and we are still in lockdown. Mortars have been going all day. All of the stores are in the process of being ransacked. We know of four fires. I believe all are in the vicinity of the park.

This afternoon I saw a lot of smoke coming from the direction of the park. I asked what is burning and was told la casa partido. I interpret that to be the party headquarters. We hear sirens and yelling. It seemed one of the buildings behind us was burning, we saw smoke from the courtyard. The owner sprayed the roof with the hose. We thought we might need to evacuate. Now, it seems we will stay here.

“I am completely certain that this is a coup d’etat”

While here I will respond a bit to earlier posts including what I have just read. I will try to be brief. The fact that the US was mute when the Honduran people went to the polls in search of greater justice and democracy even though the prospect of better leadership there would certainly help stem the tide of people fleeing to the border makes the idea that they just want a smooth transition to seem implausible. I paraphrase Noam Chomsky to the end of the paragraph then return speaking for myself; the idea that a truly democratic government can come about anywhere is just a myth- it doesn’t exist. The United States doesn’t allow it to happen. Those who are not client states will be demonized and accused of being authoritarian. In cases of revolution the pattern is always the same, back the dictator up until the last minute, then recognize the new presence as legitimate and begin influencing them as occurred in the Philippines and Egypt.

It’s nice to think a more legitimate democracy could emerge from this, but the deeper the economic pain the more necessary outside help will be. I fear in the long run the neo-liberal solutions will be more painful to the proud people of Nicaragua. Here almost all of the small businesses are locally owned, in Costa Rica in the tourist places (especially the beach towns) almost all of the businesses are in the hands of foreigners. Big investors buy up hotels, build condos and the cost of living goes up and up, pushing the poor and even middle class down. For me, it is a question of whether a country can remain independent of Washington. I found the other points worth considering. This is just my two cents.

I am completely certain that this is a coup d’etat and given the present state of things, I am not surprised the Ortega’s have been left somewhat stunned. With mobs roaming the street wielding knives and mortars I do not blame them for constructing a barrier. With the dialogue abandoned, the Truth Commission rejected, the international community failing to be at all constructive, they are in a tight spot…

What does surprise me is that few seem to see this catastrophe for the well-orchestrated event which in my opinion it so clearly is. I would not even say the US is the primary backer of the events, they are just there in the background. It is the right-wing within Nicaragua with a level of antipathy toward the Ortegas that cannot be overstated who have everything to gain and nothing to lose.

On April 19 student-led protests began what the Mainstream media and international NGOs would describe as a pro-democracy uprising. Initially at issue were the social security reforms. For reasons, no one has been able to explain the students were highly agitated over the 1% rise in worker contributions, the 3.5% rise in employer contributions (over time) and a 5% cut in the benefit which was also a trade-off for expanded medical coverage. The alternate proposals rejected by the Ortega government and favored by the private sector COSEP and the IMF involved much greater cuts, raising the retirement age, cutting benefits completely (the little pensions) and the privatization of clinics.

The magazine Envio is published by The University of Central America. The Jesuit school was one of the epicenters of the original protest. Accordingly, one expected something more than; ‘the students were acting on emotional rather than rational grounds since they had barely recovered from the protest over the fire.’By the end of that weekend there were forty some odd deaths. The opposition claimed and continues to claim the National Police had used lethal and deadly force, firing indiscriminately into crowds with live ammunition. Yet that seems impossible given the forensics, every fatality occurred in a precise, specific, even clean shot to the head, neck or chest. Not exactly what one would expect given the street battles filled with heightened levels of chaos or that when police do shoot to kill they are trained to aim for the mid-section.

“In every instance, the pattern repeated itself: more killed- always a male”

The public, deceived by press reports, the international mainstream media and rightfully outraged over the killings continued over the following weeks to take to the streets. In every instance the same pattern repeated itself; more killed- always a male, despite the fact the early protests were well attended by females. The victims continued to be shot with incredible precision always in the head or neck, sometimes in the chest. These facts, incidentally corroborate government claims that snipers were responsible for the killings.As the death toll continues to rise this pattern has remained entirely constant. So we are expected to believe that in such scenes of chaos with the police firing indiscriminately they are responsible for this remarkably consistent targeting, never shooting anyone in the back as everyone is running, never the groin, not even the gut. Also consider many members of the police have been working around the clock, unable to even return home and barely able to sleep.

Consider also what the students were protesting didn’t even stand up to critique and hardly posed a threat to the administration. By taking such action the administration had everything to lose and absolutely nothing to gain. We are further expected to dismiss as impossible the government’s claim that snipers are responsible for the deaths despite the fact every single fatality from gunfire is entirely consistent with what sniper activity would produce and we are to reject the idea that multiple factors at play are working to destabilized the country even as we see that unfolding with our own eyes.

“How for instance did all these mortars just appear out of nowhere?”

How for instance did all these mortars just appear out of nowhere? Why even on the first day were the comment sections of videos on youtube just filled with the ‘dictator’ talk. The idea that the government has promoted the destruction, looting or general lack of order to deflect blame for their own actions is completely irrational considering it is municipal buildings, FSLN offices and the homes of Sandinistas being burned.

This whole mess has seemed to me highly orchestrated, very similar to what occurred in Ukraine just a few years ago. Snipers were brought in from Georgia, given papers, paid in US dollars and have since confessed. The cat out of the bag; that story documented here: The Hidden Truth About Ukraine, Kiev Euromaidan Snipers Kill Demonstrators. Italian Documentary Bombshell Evidence.

I understand this picture will be too dark for many to even consider. What could be more chilling than the multitudes cheering, waving flags for the assassins. Or the idea that the lives of the students were sacrificed so that a few could achieve their goals. Still the destruction continues and I suspect someday we will look back and see none of this was accidental. Thank you for reading.

Note: The article below was received in an email from S. Brian Willson, someone who the editors at Popular Resistance have great trust in. Brian is an author, activist, and veteran who works against US imperialism and war. He is currently in Nicaragua.

Brian Willson forwards Letter From Nicaragua with the following introduction:

“This is a very good assessment of the orchestrated coup in Nicaragua. The author is a Gringo who lives in Managua working at the Ben Linder house who happens to be stuck in Granada because we are under siege by many thugs armed I am sure with help of the US. We hope that the OAS soon will agree to come to Nicaragua to facilitate a true (non-church) dialogue and peace process. Granada will need some kind of physical intervention to corral the many armed thugs. The neighbors have barricaded our own neighborhood for protection from them in their unlicensed vehicles. – Brian Willson”

This video from Telesur describes what is currently going on in Nicaragua. They describe a regime change tactic used in other countries by the United States often allied with the wealthy-oligarchs. Telesur describes how it is reminiscent of the violent protests held in Venezuela. The tactic is to conduct violent protests that force the government to respond in defense with violence, then accuse the government of using violence against protesters. The US and allies will then call for intervention because the government was violent against its own people. The same tactic was used at the beginning of the war in Syria.