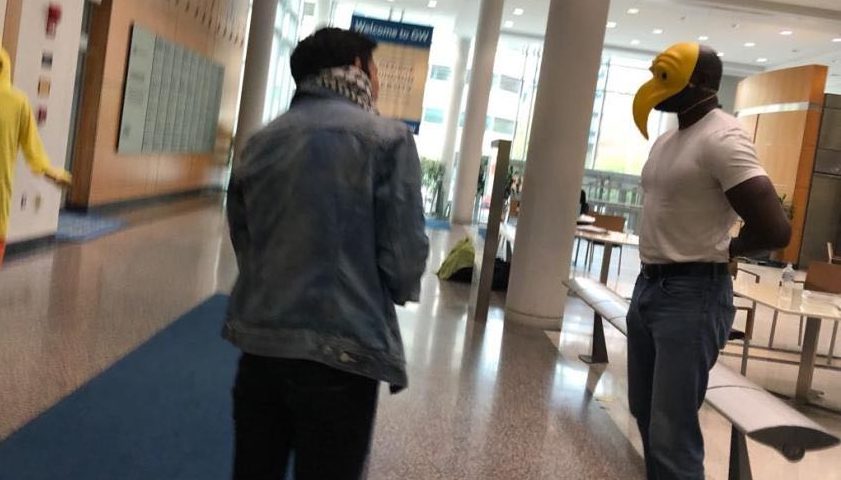 After being delayed a week because of threats to their safety, the George Washington University (GW) student Senate overwhelmingly passed a resolution to divest from nine companies known to be complicit in Israel’s violations of Palestinian human rights.

Around 1 a.m early Tuesday morning, by a vote of 18 to 6 with 6 abstentions, resolution SR-S18-21: The Protection of Palestinian Human Rights Act passed, making George Washington the second university in just a week to pass a divestment resolution. Barnard College’s student body voted in favor of a similar resolution by a record breaking margin in a campus-wide referendum on April 18.

Because George Washington is a private university, it does not disclose where its $1.73 billion endowment is invested. In fact, since 2014 the university has outsourced management to Arlington, Virginia-based investment firm Strategic Investment Group.

“Unfortunately, this administration is not transparent at all about what we’re invested in” Gomez told Mondoweiss. Nevertheless, the resolution has enormous symbolic significance.

“GW is a very geographically diverse campus, with most students from around different parts of the country” noted Gomez, who is himself from the South. That the resolution passed he said indicates broad support for divestment not only in the Northeast, but across the country.

Its passage also shows a quickly evolving view on Israel as an oppressive regime, as just last year a similar resolution was struck down by a large margin.

Although Palestinian students and those in solidarity are not strangers to intimidation on GW’s campus, the rebukes were swift.

“I want to be clear to our university community that this does not represent the university’s views and the university will not implement such a proposal” the newly appointed president declared.

“The university prioritizes the safety and security of all our students and our campus community” and we encourage students “to continue to engage in open, respectful dialogue” said LeBlanc.

The president has not responded to Mondoweiss’ requests for clarification.

However, Palestinian students at GW were quick to point out the hypocrisy in LeBlanc’s statement.

The initial vote, scheduled for April 19, was cancelled when students witnessed two unidentified individuals placing threatening posters around the university. Student targets of the attacks reported the incident to the administration but received no response. They also reported the individuals to campus police who let the suspects go.

“The attacks that were happening on campus” Ren Niz, an organizer with GWU SJP told me, prove that “Palestinians…and Palestinian allies are unsafe.”

When the resolution did pass, supporters were elated after advocates spent countless hours lobbying Senators, writing the resolution, and engaging in grassroots campaigning.

“We had really personal conversations…and really spent time trying to explain things to the senators and trying to get our voice heard” Niz said.

Palestinian students can now begin “moving from anonymity, to be seen on campus as the marginalized community that we are.”

In an open letter to President LeBlanc, Tyler Katz, a senior and supporter of SJP, expressed strong disappointment with the administration’s lack of response to the threats.

“When it comes to student safety, you’re silent. When it comes to the University’s endowment and investments, you are its chief defender. How should a prospective student feel, knowing that the President of this University will speak out about a divestment resolution, but not about their personal safety and security? How should a mother feel, knowing that you value a bottom line over the safety of her child?” Katz wrote.

The full letter can be read here.

The next step toward actually disinvesting funds from the named companies will consist of what is likely to be a long process of meetings between students and faculty.

While divestment is ultimately decided by the Board of Trustees, the university president generally wields considerable influence over such a decision.

“I’m hoping to meet with the administration soon, regardless of what the president has released” senate sponsor Josh Gomez told Mondoweiss. “I know that he can’t get along rejecting student wishes forever.”

A number of recent incidents illustrate that the safety of Palestinian students and Palestine solidarity allies continues to be a major concern at GW.

Individuals believed to be working on behalf of Canary Mission showed up on campus for a second time the night of the Senate vote, this time with a decidedly more bizarre plan.

The same two men whom students witnessed the week before, stood outside the entrance to the lecture hall where the vote was to take place. One wore a long nosed bird mask and the other dressed in a full bird costume. This time another individual was present, coordinating the two costumed men and refusing to speak to anyone.

“They knew our campus, they knew where everything was happening. They knew the location of the hearing…they came inside the building where the vote was happening [and stood] right outside the doors.”

“It was very troubling because we didn’t realize that they were Canaries” until someone pointed it out she said. “And then we all just stared at each other and we’re like, ‘oh my God.’”

Especially ominous threats such as “you only saw two of us…but we see all of you” have many in the community mentally exhausted Niz told me.

The three individuals were eventually escorted from the building by campus police who unlike last time, looked at their IDs. According to what GWU Police told students — now twice attacked on their own campus —the two had Massachusetts licenses and we’re staying in a nearby hotel. The police would not say anything further and no action was taken against the the still publicly unidentified men.

But, if there is a silver lining it is that “they proved our conspiracies right.”

“People who didn’t really know about Canary Mission and didn’t know about their anti-Palestinian rhetoric realized that this is a real life threat and it needs to be addressed” added Niz.

“Whenever we have spoken to students about [Canary] Mission, no one would believe us because blacklists are illegal in America.”