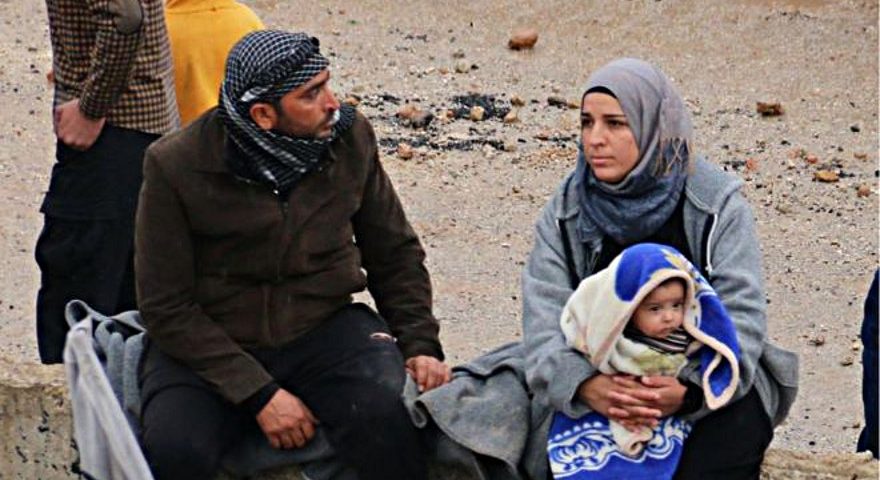 Photo: A family preparing on May 7 to evacuate their home in Rastan, near Homs, a pocket of rebel-held territory that was massively bombed. Syrian government and Russian forces are allowing refugees to relocate to rebel-controlled areas in Idlib province, in the north. (AP)

by BRUCE LESNICK, originally posted on Socialist Action, May 9

The U.S. and its Gulf and NATO allies have been fighting a war of aggression against Syria for over five years. Plans to replace the Syrian government with one more subservient to the needs of U.S. corporate interests began well before that. The Pentagon has spent $41.1 billion in Syria since 2001, according to a study by Brown University. U.S allies Saudi Arabia and Qatar have funneled huge additional sums to ISIS and Al-Qaeda affiliated “rebels” in Syria since at least 2011. The Pentagon, prone to understating its footprint, admits to 2,000 uninvited soldiers currently stationed in Syria against the will of the Syrian people. The real number is likely more than twice that when one accounts for secret operatives, contractors, support operations and the like. Meanwhile, the U.S. currently occupies 30% of Syrian territory against the will of the Syrian people, including significant water, oil and natural gas reserves.

As with Iraq, Libya and a long list of other wars before it, U.S. illegal intervention in Syria is based on lies. We’re told that U.S. political and military leaders – who have no concern for poverty; unemployment; declining living standards; rampant inequality; racist murders by cops; a manifestly corrupt, undemocratic political system; poison air and water; crumbling infrastructure; decaying social services and environmental devastation at home – care deeply for the health and wellbeing of the Syrian people. We’re asked to believe that our government – which supports right wing, business-friendly repressive governments around the world, from Saudi Arabia and Israel to those installed by US supported coups in Egypt, Ukraine and Honduras – is deeply concerned about freedom and democracy in Syria. Nonsense!

And what of charges that the Syrian government represses its own citizens? Well, given that Syria is a capitalist country – which means that the majority work to produce the wealth while a small elite controls all the wealth and power – it’s a foregone conclusion that there is repression and exploitation. (The same could be said of the U.S., with our history of Native American genocide, slavery, Jim Crow segregation, school-to-prison pipeline, racism, sexism and declining living standards for the majority amidst mushrooming fortunes for the few at the top.) Still, most crimes the Assad government is accused of have not been proven, including the three alleged chemical attacks that were used to justify U.S. threats and missile strikes. We know the imperial aggressors cannot tell the truth about their wars for profit and still hope to avoid opposition to those wars at home. So, they have every incentive to lie and exaggerate the supposed transgressions of their victims. For this reason, the rational approach is to treat all claims of the U.S. war makers as false until categorically proven to be true. But any crimes or deficiencies clearly attributable to the Syrian government are for the Syrian people to address; it’s not for outside servants of the 1% to hypocritically assert the right to invade and “fix” Syria.

The world is divided between strong nations, with global economic and military reach – the U.S. and most EU nations, for example – and those with much less power and influence. Just as within each country the rich exploit the poor, on the world stage the rich, powerful, imperial nations exploit the weaker nations. When an imperialist country like the U.S. attacks a semi-colonial country like Iraq, Libya or Syria, the moral landscape is no different than an armed thug attempting to rob a hapless pedestrian. We have no need – indeed no right! – to concern ourselves with the moral character or past transgressions of the pedestrian. The pedestrian has the right to defend him/herself, as Malcolm X put it, “by any means necessary!” Malcolm explained, “I don’t think when a man is being criminally treated, that some criminal has the right to tell that man what tactics to use to get the criminal off his back. When a criminal starts misusing me, I’m going to use whatever necessary to get that criminal off my back.”

The same holds for Syria’s fight against the U.S., Saudi, EU aggressors and their ISIS and Al-Qaeda plenipotentiaries. It is in the interest of the 99% to oppose the U.S. aggression and support Syria’s right to self-determination unconditionally. That means irrespective of the flawed, capitalist government currently in charge in Syria. It also means, as Malcolm argued, that the Syrians have the right to fight off the onslaught as effectively as they can, including by enlisting the help of Russia, Iran, Hezbollah and anyone else willing to lend a hand to their side.

Adopting this principled stance implies no political support to the Assad government. But it does recognize that if there are governmental changes to be made in Syria, this is for the Syrian people and no one else to undertake. Moreover, when it comes to replacing substandard governments or institutions, it makes a big difference to the working majority in Syria, the U.S. and the world in general whether such a replacement happens from the right – which would be the result if the U.S. and its jihadi allies were to overthrow the Syrian government – or from the left – which would be the case if the Syrian people, unhindered by outside aggression, organized to replace the Assad government with a government of, by and for the working people of Syria. For this reason, the most conscious workers in Syria understand that defeating the U.S. aggression is a top priority and a prerequisite for opening any space for progressive change within Syria.

Of course the Syrian people have a huge interest in the outcome of the current war. But both the 99% and the 1% in the U.S. also have a gigantic stake in the outcome of this conflict. Here at home, the 1% is pitted against the 99% in every conceivable way, and it is a zero-sum game: when they win, we lose, and when we win, they lose. The 1% profits by war, racism, sexism and economic exploitation. They maintain their unnatural minority hold on power through force and repression. Exploiting people in Syria and other countries is part and parcel of how they maintain their power over us here at home. A victory for the U.S. and its allies in Syria would be a victory for the 1% here at home as well. A defeat for the U.S. in Syria, on the other hand, would mean a defeat for the 1% here at home, and would aid us in our own fight for social, economic and political justice.

Every movement – from Black Lives Matter, Me Too, climate action, labor organizing, workers’ rights and defending civil liberties – will be affected by the outcome of the fight in Syria because all of these movements confront the illicit power and influence of the 1%. And the power of the 1% is directly connected to its ability to exploit working people abroad as well as at home.

Hands Off Syria! U.S. Out Now!
Not One Dollar, Not One Bomb, Not One Bullet for the Wars of the One Percent!