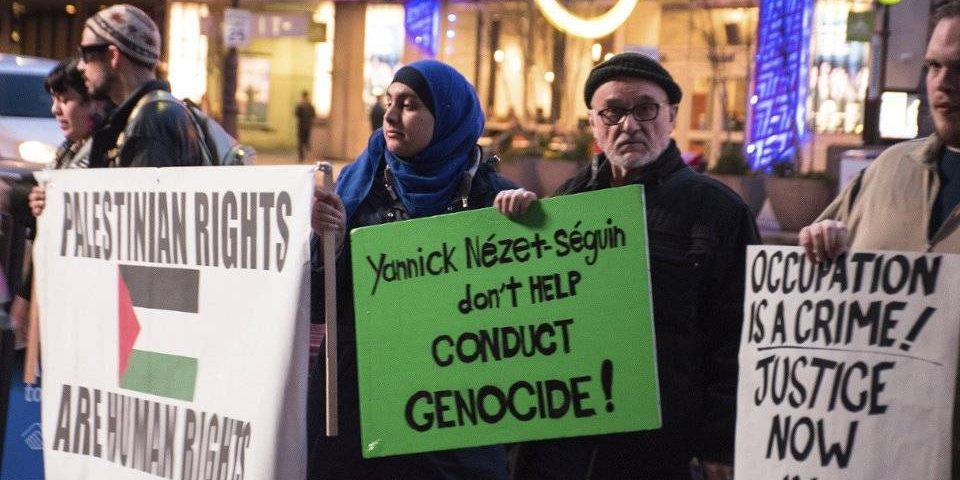 For the third week in a row, demonstrators gathered outside the Kimmel Center in Philadelphia on April 21 to protest the Philharmonic Orchestra’s planned visit to Israel in June.  The visit is part of a “cultural tour” to celebrate the 70th anniversary of Israel’s occupation of Indigenous Palestinian lands. The orchestra’s “cultural” itinerary includes a tour of an Israeli Defense Forces base.

Earlier in April, Philly Don’t Orchestrate Apartheid was launched to galvanize opposition to the tour.  The tour is fully funded and supported by the Jewish Federation as part of a decade-long “Brand Israel” campaign to shift global public perceptions about Israel and cover up the realities of its brutal colonial apartheid occupation of Palestine.

Outside the Kimmel Center, classical music provided a background for a video played on a screen so concert goers could witness the Zionist violence that Israeli troops and settlers inflict on Palestinian people, even children.

Activists held signs, chanted and handed out fliers explaining why the trip should be canceled. Speakers addressed concertgoers as they entered the Kimmel Center to hear the orchestra. Demonstrators chanted, “Cancel your trip to Apartheid Israel!”

The PDOA demonstrations coincided with “Right of Return” protests in Gaza, where Israeli soldiers have fired on hundreds of Palestinian demonstrators, with the intent to kill and maim, murdering over 30 to date.  The Gaza protests are aimed at breaking an inhumane border blockade imposed by Israel in 2007 that turned Gaza into an “open air prison.”

Israeli soldiers firing April 21 from across a border fence killed four Palestinians, including a 15-year-old boy, and wounded more than 150 others, health officials said.  These crimes occurred as several thousand people in blockaded Gaza staged a fourth round of weekly protests on the Israeli border.

On the same day as the protest against the orchestra’s planned trip, Israeli Deputy Knesset Speaker Bezalel Smotrich of the Habayit Hayehudi party posted an insulting tweet about Ahed Tamimi, the Palestinian teenager famed for slapping an Israeli soldier on camera. “In my opinion, she should have gotten a bullet, at least in the kneecap,” he wrote. “That would have put her under house arrest for the rest of her life.” (scribd.com, April 23)

PDOA has launched an online petition campaign calling on the orchestra to cancel its trip. Sign the petition at Don’t Collaborate with Apartheid, Cancel Your Tour to Israel! (tinyurl.com/y7vzjy8f)

Demonstrators will be out again on April 28.