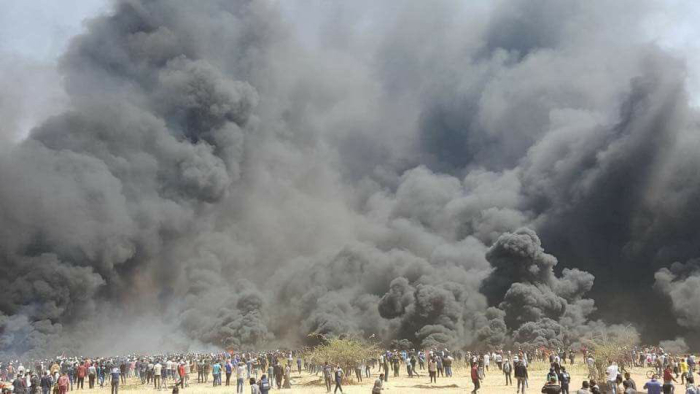 Palestinian protesters burn tires on April 6 to obscure the vision of Israeli snipers on the Gaza border.

On Friday, April 6, one week after the Land Day Massacre, more than 20,000 demonstrators returned to the border fence between Gaza and Israel to demand the right to return for all Palestinians. Protesters burned tires to obscure the vision of Israeli snipers.

The death toll now stands at 31, with 10 killed by Israeli gunfire on the 6th, and including the 21 who died as a result of the Land Day assault on the March 30. An additional 491 more were wounded by gunshots on April 6. Dozens of the wounded are in critical condition.

Palestinian journalist Yaser Murtaja, 30, was killed by Israeli forces, despite the fact that he was wearing a vest that clearly said “press” on it. The Palestinian Journalists Syndicate reported that seven other journalists were targeted by Israeli troops.

Following the Land Day massacre, human rights organizations, both in Israel and in other countries, condemned the attack. On April 5, the Israeli human rights organization B’Tselem launched a campaign calling on IDF soldiers to refuse to fire on protesters, asserting that troops have a legal obligation not to commit criminal acts. Spokespersons for the Methodist Church in Britain condemned the March 30 shootings as a “crimes against humanity.”

The Gaza massacre was answered by demonstrations in London, Milan, Jakarta, Athens, Berlin, and New York. On April 6, a coalition of Philadelphia-area activists protested outside of the Philadelphia Orchestra in anticipation of the symphony’s trip to play in Israel. Demonstrators demanded that the orchestra cancel its performances in response to Israel’s human rights abuses in the occupied territories and Gaza.

A U.S. government statement demonstrated which side the imperialists are on by placing the responsibility for the violence on protest organizers, not on the Israeli military. It said:

“We condemn leaders and protesters who call for violence or who send protesters—including children—to the fence, knowing that they may be injured or killed.”

With few exceptions, the U.S. media fell in line behind the State Department narrative of “clashes” and violence on both sides.  Israeli Prime Minister Netanyahu praised the actions of his troops.