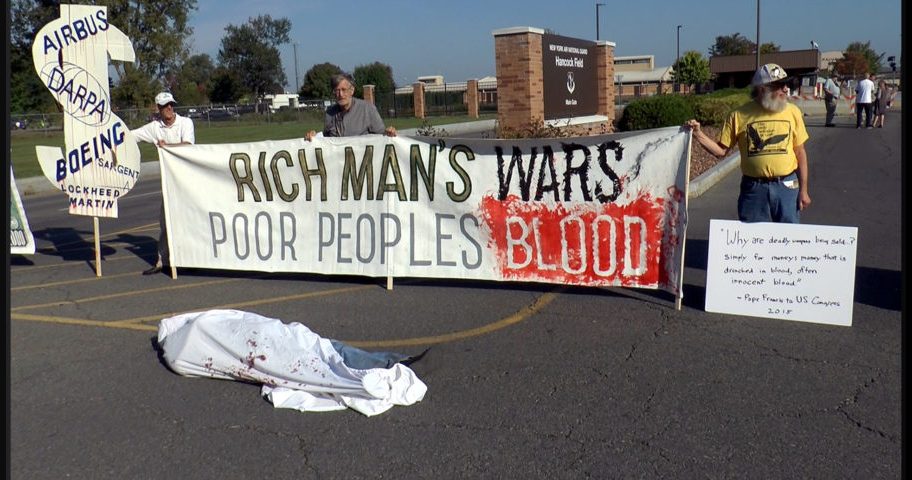 Civil Resistance at Hancock Base, 2016 ~photo by Heriberto Rodriguez

by Ann Tiffany and Ed Kinane, originally published on Voices for Creative Nonviolence

Activist, author and scholar Gene Sharp died this past January 28. Inspired by Gandhi and deeply informed by history, Sharp (b.1928) founded the Albert Einstein Institution in Boston. Back in the 80s, Ed plowed through Sharp’s three-volume, 900-page, The Politics of Nonviolent Action (Porter Sargent, 1973).

The tome pivots on Sharp’s “198 Methods of Nonviolent Action,” for toppling dictators and enlarging liberation. Widely reprinted, the systematic (though somewhat redundant) list examines methods that over the centuries had been successfully used at least one time or another across many cultures.

These methods apply not only to regime change, but also to other causes. Grassroots groups we’ve been a part of have used dozens of them. Many would be familiar to Peace Newsletter readers. For all its breadth, that iconic list still remains, as if in amber, at 198 items. Activists in this age of social media could now cite additional tactics.

Sharp wrote many books. His intellectually exciting Making Europe Unconquerable (Harper & Row, 1985) is highly practical. It draws on nonviolent tactics used by the Resistance during the Nazi invasions. At 93 pages Sharp’s more theoretical From Dictatorship to Democracy: a Conceptual Framework for Liberation (Bangkok, 1993) is Sharp’s most impactful work. It is downloadable for free and, according to the Albert Einstein Institution, has been translated into dozens of languages. Anti-tyranny activists circulated the handbook clandestinely during the East Europe color revolutions and during the Arab Spring. Some commentators claim that the handbook played a significant role in those mostly nonviolent upsurges of grassroots resistance.

Our local Beyond War and Militarism committee’s working paper, “Getting Beyond War and Militarism: A To-Do list” (Jan/Feb 2019 PNL), complements Sharp’s “198 List.” Where “198” is rich in examples and documentation, our single-page, 22-item to-do list points out major goals and policy areas for activists to pursue. Shar provides tools for overthrowing state oppression, while ours seeks to counter the militarism infecting political parties and regimes, “democratic” or authoritarian. Unlike much mainstream media commentary, the to-do list can guide us in resisting US exceptionalism and imperialism.

To resist Mr Trump, many US activists have recently taken their cues from “The Indivisible Guide,” also freely available online. Compiled by former Congressional staffers, the Guide has gone viral in the wake of Trump’s election. It promotes Tea Party –type electoral efforts. For a decidedly distinct approach we encourage activists to study Sharp – thereby getting beyond the Democrat/Republican duopoly with its bipartisan, heavily-lobbied, profit-hungry lust for war.

Today’s PPC is organizing in over 30 states and envisions 40 days of civil resistance from Mother’s Day, May 13, to the June 21 summer solstice. We intend those 40 days to be a fresh start on defanging the Trump regime. In New York State, the PPC is preparing for a large civil resistance action in Albany on Monday, May 14, the day after Mothers’ Day. Details forthcoming. Here in Syracuse, one or more May 14 affinity groups are forming.

Why civil resistance? As Gandhi and Sharp and Poor People’s campaigners know, tyrannical regimes can only exist with the compliance of those they rule. We, the ruled, must forsake our fears, our distractions, our addictions, our co-optations and, to keep us free, resist the lure of consumer credit. If enough of us shed our aversion to risk, our habits of obedience and deference to power, and if we do what we can to thwart the complicity of institutions with the power structure, the pillars propping up the regime will give way.

In closing, let us leave you with yet another key resource to read: Erica Chenoweth and Maria J. Stephan’s Why Civil Resistance Works: the Strategic Logic of Nonviolent Conflict (Columbia U. Press, 2011). These two heirs of Sharp don’t lean on either the idealistic or the spiritual. Like Sharp, they provide pragmatic and rigorous – yet accessible – analysis of why nonviolent tactics are usually more successful and always less destructive than militarism.

Ed Kinane and Ann Tiffany have long been anti-militarism activists. Since 2010 they have worked to expose Reaper drone war crime perpetrated by Hancock Air Base, home of the 174th NYS National Guard Attack Wing. Reach them at edkinane340(at)gmail.com or anntiffany6236(at)gmail.com.