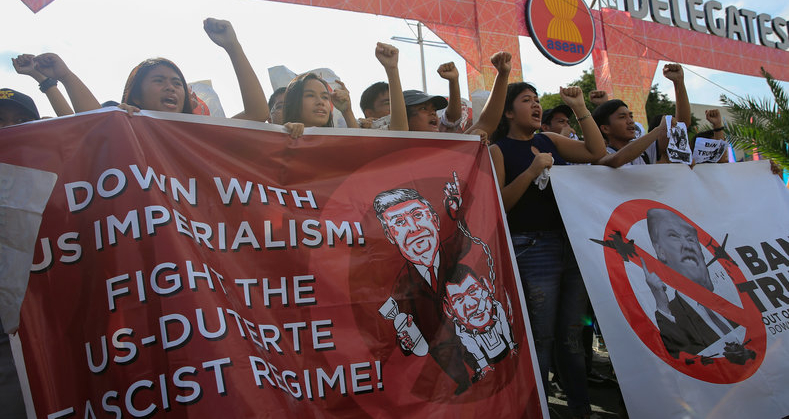 by Rhonda Ramiro of Bayan USA and Azadeh Shahshahani, originally published in the Huffington Post

That union in the 1980s allowed the Marcos dictatorship to last 14 years, despite Marcos’ notoriety for murdering over 3,000 people as well as jailing 70,000 and torturing 34,000 of his political rivals and other innocent people. Reagan stood by his Filipino ally to the bitter end, even granting Marcos asylum in Hawaii when it became clear that “people power” would soon topple the unsustainable dictatorship. According to Reagan, granting a haven to Marcos and 90 of his family members and close associates was “in the best interests” of U.S.-Filipino relations. Those interests included a network of some of the largest U.S. military bases in the world at the time.

Such die-hard support for a brutal dictator was immoral back then.

Knowing the legacy of trauma that the Marcos dictatorship inflicted on the Filipino people and the country as a whole makes supporting the admittedly fascist upstart dictator Duterte completely unjustifiable today.

When Reagan took power in 1980, Marcos had already been ruling the Philippines under martial law for eight years, with the full support of former Presidents Richard Nixon, Gerald R. Ford and Jimmy Carter. Reagan’s support for an additional six years meant Marcos and his military could rack up more human rights abuses with impunity.

Today, Duterte is well on track to surpass the body count of his self-proclaimed idol. An estimated 13,000 people have been killed in the war on drugs; 113 activists have been killed under the U.S.-designed counterinsurgency program of the Philippine government; and more than 400,000 people have been forcibly displaced due to the Philippine military’s aerial bombing of Marawi City and nearby communities of indigenous people throughout the southern island of Mindanao, under the guise of the war on terrorism. At the rate Duterte is going, this could mean the murder of 52,000 more people over the remainder of his six-year term.

Never mind that today the Philippines is home to 100 million people, the majority of whom are dirt poor, largely due to 119 years of U.S. policy toward the country. With no sustainable domestic industry to speak of and an economy grossly dependent on exports in large part because of the colonial legacy left behind by first Spain and then the U.S., the Philippines under Marcos began to systematically export its people to work in foreign countries — and send remittances home to keep the Philippine economy afloat. Today, poverty is so severe that nearly 6,000 Filipinos leave the country every single day in search of work; the Philippine economy would collapse were it not for $27 billion in remittances these migrant workers send home annually.

At the turn of the 20th century, the U.S. acquired the Philippines as a colony and relinquished the country only after World War II, when dependable local puppet leaders could be installed and economic and military treaties cementing the Philippines to U.S. interests could be imposed. These include patently unequal military agreements that tie the Philippines to the whims of U.S. imperial ambitions: the Mutual Defense Treaty, Mutual Logistics Support Agreement, Visiting Forces Agreement and, most recently, the Enhanced Defense Cooperation Agreement. These agreements grant the U.S. military expansive access to military facilities, land, water and airspace in the Philippines for an indeterminate length of time under the guise of “mutual benefit.” Conveniently, the U.S. military presence has been focused in resource-rich regions of the Philippines, facilitating land-grabbing and extraction of the country’s natural wealth by multinational corporations.

Challenges to the constitutionality of the agreements have been brought to the Philippine Supreme Court repeatedly as the Filipino masses have staunchly protested U.S. military presence and operations on Philippine territory for decades. After all, they have experienced the brunt of the violence against women and children, toxic waste, forced displacement from land and other crimes committed by the U.S. military.

For the U.S. in the 1970s and ’80s, propping up the Marcos regime served the purpose of securing its military stronghold in the Pacific as the Cold War approached its climax. Neighboring Vietnam had resoundingly defeated the imperialist American invaders just a few years earlier. The U.S. and Soviet Union were engaged in a nuclear arms race.

Today, Trump needs Duterte and the Philippines to remain a dependable ally for U.S. imperial interests in the Asia Pacific region. Trump’s current brinkmanship with North Korea means that the threat of nuclear war looms large. Trump has named China repeatedly as one of the biggest rivals to U.S. economic superiority in not only the region but the world. China, the Philippines and neighboring countries dispute territorial control of the waters and islands in the South China/West Philippine Sea, which contains vast petrochemical and gas deposits, rich marine biodiversity, and sea lanes that facilitate much of the global trade and shipping for the entire region.

In January, the U.S. Defense Department announced it had launched the counterterrorism mission “Pacific Eagle: Philippines,” which is designated as an Overseas Contingency Operation, thereby making it eligible for exemptions from spending limits. The operation will only strengthen the Duterte regime as it continues to crack down on vulnerable minority populations.

The 1 percent may agree with Trump that it is in the best interests of their America to continue supporting Duterte. The rest of us should not be complicit in the slaughter.

Last week, the International Criminal Court officially opened a preliminary investigation into allegations of state-sanctioned killings and other human rights violations committed by the Philippine National Police under the direction of Duterte.

Now, U.S. lawmakers should join others in the international community and stop enabling Trump’s agenda in the Asia Pacific to be propped up by the rising body count of Filipinos killed under Duterte’s war on drugs and war on terrorism. Funding for Duterte’s death squads in the form of U.S. Foreign Military Financing aid to the Philippine military and police should be struck altogether from future U.S. budget allocations.

Congress should go a step further and study the effect of such agreements between the U.S. and the Philippines, such as the Mutual Defense Treaty, Visiting Forces Agreement and Enhanced Defense Cooperation Agreement. These provide the basis for continued support to the Philippine military in the first place, even when these same state security forces are implicated in the majority of extrajudicial killings and other human rights violations. Moreover, these agreements have been used to shield the U.S. military and its personnel from accountability for crimes committed in Philippine territory, essentially subordinating Philippine sovereignty to U.S. military interests. Is that really any different from Reagan’s justification for his granting of asylum to a murderous dictator?

Can the U.S. depart from over 100 years of colonial treatment of the Philippines and instead deploy a framework of mutual respect, mutual benefit and respect for national sovereignty? Absent this, we should expect to birth more puppet presidents and dictators in the Philippines.

Rhonda Ramiro is the vice chair of BAYAN-USA, an alliance of 20 Filipino organizations in the U.S. Azadeh Shahshahani (@ashahshahani) is legal and advocacy director at Project South and a past president of the National Lawyers Guild.