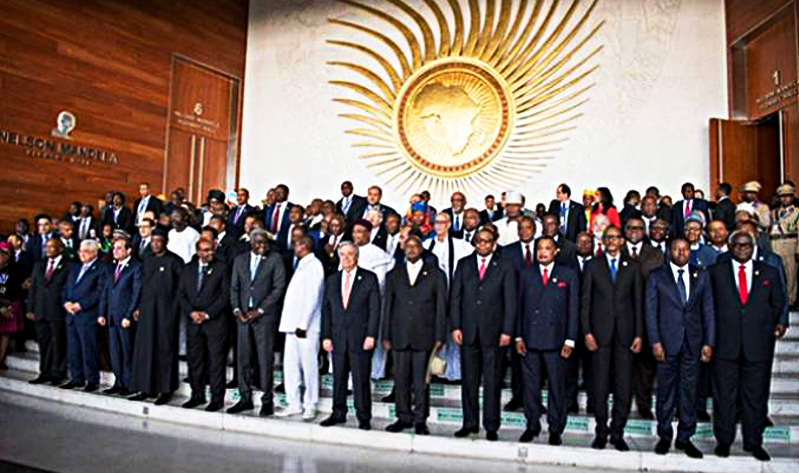 President Donald Trump’s demeaning comments on his preference for northern European immigrants over Africans both on the continent and in the Caribbean indicate the postcolonial crisis in relations between global capitalism and emerging nations in Africa, Asia-Pacific, Latin America and the Caribbean.

This division of wealth, power and influence is glaringly illustrated by the character of two summit meetings held in late January. One gathering in Addis Ababa, Ethiopia, where the 55-member African Union met at its headquarters built by the People’s Republic of China, somewhat represented the aspirations of over 1 billion people living on the continent.

Another confab in Davos, Switzerland, known as the World Economic Forum, was dominated by Western industrial and financial magnates and imperialist governments’ heads of state. African leaders were in Davos, notwithstanding their disadvantaged status.

The Addis Ababa gathering was the 30th summit of the AU, successor of the   Organization of African Unity, founded in that Ethiopian capital on May 25, 1963. For 55 years, the AU/OAU has sought to promote the rapid eradication of colonialism and the unification of Africa.

The AU has recently fostered the development of preferential trade areas and strengthened regional organizations, including the Economic Community of West African States, the Southern African Development Community, the East African Community and the Intergovernmental Authority on Development.

The AU summit’s focus was on ending corruption within nation-states. The organization has expressed the goal of becoming completely self-reliant within another two years.

“Chairperson of the African Union Commission, Moussa Faki Mahamat, commended the quality work done by the Permanent Representatives’ Committee with the view to establish appropriate conditions conducive to the success of this meeting of the Executive Council.”  He commended “contribution[s] to the Peace Fund aimed at consolidating peace efforts within the continent. [He] expressed the hope that by 2020 AU [can] finance itself at 100% if we maintain this trend of increasing interest by the Member States willing to contribute substantively on peacekeeping in Africa. [He]underlined that the AU Commission can pursue this commitment and resolution and will rely on Member States to support … self-financing.”

The WEF took place following the recent U.S. tax bill’s passage, to which is being attributed the rise in the stock market and the prospects for huge profits by transnational corporations and banks. Although Trump has alienated many in the business media and government, Wall Street apparently agrees with his goal of redirecting monumental amounts of public spending to the capitalist class.

In Davos, these firms praised Trump’s program. Before the gathering, large corporations, including Walmart, announced raises for its low-wage employees. Although this makes good propaganda for “trickle-down” economics, the reality is that hundreds of U.S. retail outlets are closing. This downsizing in malls and shops has been blamed on the growth of e-commerce. However, no concrete assessment has been presented publicly to explain the layoffs of hundreds of thousands of workers.

Capitalist elites in Davos viewed the tax heist as having the potential to stimulate profitability and enhance direct investments. The Republican-dominated House and Senate passed legislation which lowers the corporate tax rate from 35 percent to 21 percent. Provisions will ostensibly provide incentives for U.S.-based companies to bring money held overseas back into the country. This policy prompted Credit Suisse CEO Tidjane Thiam to suggest the firm will seek investments in the U.S.

“Citigroup CEO Michael Corbat predicted the change in tax rules would help power business expansion. … The executives voiced concerns that with the U.S. economy at full employment, businesses may struggle to fill new jobs that result from this wave of investment. ‘The reality of bringing a lot of jobs back is difficult,’ said Bank of America CEO Brian Moynihan.” (Jan. 23)

This notion of “full employment” in the U.S. at 4.1 percent blatantly ignores the Labor Force Participation Rate — the actual indices measuring involvement in job holdings.  It stands at only 62.3 percent, leaving over one-third of the workforce outside the formal labor market. Poverty levels remain high at approximately 43 million people; they are much higher within African-American and Latino communities, where the official rates of impoverishment are 23 and 19 percentage points, respectively.

Such a situation is not likely to attract substantial foreign investment in the African continent on terms favorable to AU member states and their constituencies. Moreover, the Trump administration’s racist sentiments as reflected in domestic and foreign policies clearly give pause to any optimistic view by African leaders regarding U.S. relations with the continent.

Consequently, some African business and political leaders stated they would walk out of Trump’s speech to the WEF on Jan. 26. Trump denied referring to African states as “shitholes,” as asserted by witnesses, although he admitted using “tough language.”

Trump did meet with Rwanda President Paul Kagame and other African leaders. But the AU and individual states have demanded an apology for Trump’s racist remarks. None has been offered.

Whatever the scope of protests by African corporate and political leaders over Trump’s speech in Davos, long-term questions remain over the relationship between AU member states and world capitalism. These connections historically have been byproducts of slavery, colonialism and neocolonialism. The last decade’s growth within African nations has been relative; it is still dependent on commodity prices determined by international finance capital.

Therefore, several African economies, as in the Federal Republic of Nigeria, the Republic of South Africa and the Republic of Angola, are only now said to be emerging from recession. These nations are producers of energy and mineral resources where prices have declined precipitously in the last four years.

Ultimately, Africa must collaborate to a greater degree with other emerging economic regions to establish an alternative monetary and trading system which excludes the U.S. and all imperialist states as dominant forces. Only when this occurs can the continent’s and the world’s sustainable development be realized.