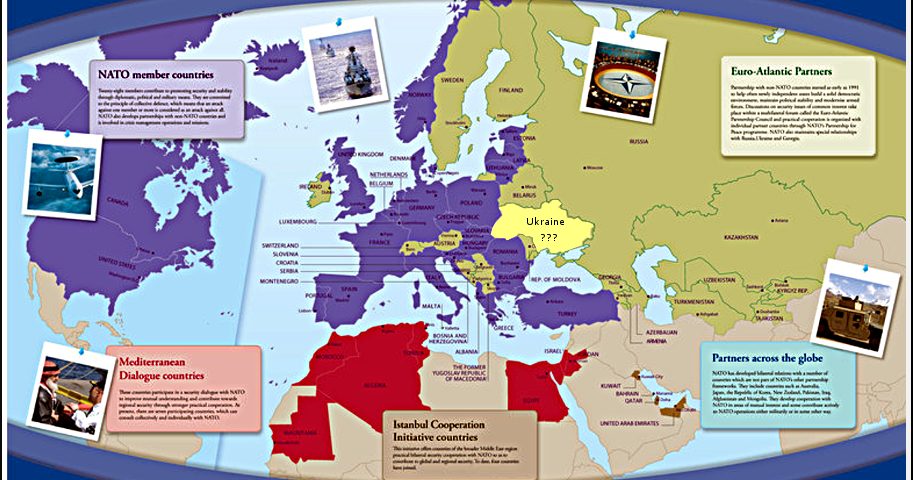 This map of NATO members and allies from NATO.int  gives you an idea of what Phil is describing.

When the North American Treaty Organization, or NATO, was founded on April 4, 1949, it had 12 members: the U.S., Canada and 10 Western European countries. By then the wartime cooperation with the Soviet Union was long over and NATO was essentially an anti-Soviet military/political alliance.

Six years later, as a counterbalance, the Soviet Union formed the nine-member Warsaw Pact, formally the Treaty of Friendship, Cooperation and Mutual Assistance. That alliance was dismantled in 1991, 10 months before the formal dissolution of the Soviet Union. By then the U.S. had assured the Soviets that NATO would not be expanding eastward. U.S. officials now deny that, but this is from the Los Angeles Times of May 30, 2016:

“In early February 1990, U.S. leaders made the Soviets an offer. According to transcripts of meetings in Moscow on Feb. 9. then-Secretary of State James Baker suggested that in exchange for cooperation on Germany, [the] U.S. could make ‘iron-clad guarantees’ that NATO would not expand ‘one inch eastward.’ Less than a week later, Soviet President Mikhail Gorbachev agreed to begin reunification talks. No formal deal was struck, but from all the evidence, the quid pro quo was clear: Gorbachev acceded to Germany’s western alignment and the U.S. would limit NATO’s expansion.”

Far from limiting NATO’s expansion, the U.S. vigorously promoted it.

In 1999, the Czech Republic, Hungary and Poland were admitted into NATO. In 2004, Bulgaria, Estonia, Latvia, Lithuania, Romania, Slovakia and Slovenia all became NATO members, followed in 2009 by Albania and Croatia and Montenegro this past June 5.

So today NATO has expanded to 29 member countries, with 13 – nearly half – either former members of the Soviet bloc or part of the former socialist state of Yugoslavia. All new members admitted into NATO since the collapse of the Soviet Union are in Central or Eastern Europe. From a North American and Western European alliance, it has become a North American and European force that has moved steadily eastward right up to Russia’s borders.

In 1992, six post-Soviet states – Russia and the much smaller countries of Armenia, Kazakhstan, Kyrgyzstan, Tajikistan and Uzbekistan – signed the Collective Security Treaty, or Tashkent Treaty. But of those, only Russia is a major military power.

In NATO, the United States, United Kingdom and France together possess a total of 7,315 nuclear weapons. Russia is believed to have about 7,000. But in terms of overall military power, Russia’s military budget in 2016 was just over 8 percent of the combined total of all NATO countries, and just over 11 percent of the U.S. alone.

This is important, because one of NATO’s founding principles is that an attack on any one member country is to be considered an attack on all NATO members.

Today Russia is faced with a massive military and political alliance that includes Estonia and Latvia, two of the six countries on its western and southern borders.

Belarus and Russia remain allies, and in September 2016 carried out joint military exercises, well within Belarus’ borders with Poland, Latvia, Lithuania and Ukraine. But this is how the exercises were reported by National Public Radio:

“In one of the biggest shows of military might since the end of the Cold War, Russia and Belarus are conducting joint maneuvers on NATO’s doorstep, [my emphasis – PW] where the exercises are prompting jitters in some former Soviet satellites.”

Georgia, which borders Russia’s southern flank, is not yet a NATO member, but has been accepted for membership pending meeting certain internal “reform” requirements. Meanwhile, according to the NATO website, “Georgia has provided valued support for NATO-led operations in Kosovo and Afghanistan …”

Azerbaijan, a country of less than 10 million people south of Russia and east of Georgia, maintains a neutral stance between Russia and the West, trading with both.

That leaves Ukraine, the country with the longest border on Russia’s eastern or southern flanks.

Ukraine is not yet a member of NATO or the European Union, but its multimillionaire, Western-oriented president, Petro Poroshenko, who achieved his position as the result of the bloody U.S.-backed coup in 2014, would like it to join both. He recently announced that a referendum on the question will be held soon. Meanwhile Ukraine, which shares a more-than-12,000-mile land border with Russia, is acting as a NATO member in all but name:

Think about all this. It would be like Russia training Mexican troops and carrying out joint military exercises in the Gulf of Mexico so the two countries could “cooperate” in time of war.

Further, the U.S. National Defense Authorization Act for Fiscal Year 2018 authorizes $500 million to provide military aid to Ukraine, including what is called “defensive lethal assistance.” This comes on top of what the Reuters news agency reports has been $750 million in non-lethal aid, such as uniforms and radars, since 2015.

These exercises, training missions and military aid are always described as “defensive” in nature, meant to help Ukraine protect itself against alleged Russian aggression. But it’s not Russia that’s expanding its military right up to the borders of the United States. It’s not Russia that has built a military alliance that now includes 29 countries, moving ever closer to its declared adversary.

Members of the U.S. Congress and the media accuse Russia of meddling in the last U.S. election, but the U.S. did much more than meddle in Ukrainian politics – in 2014 it overthrew the country’s Russia-friendly president with the help of neo-Nazi organizations that have unleashed a reign of terror in the east, from Odessa to Donbass.

I saw members of these fascist organizations on May 2, 2016, when I traveled to Odessa with fellow U.S. anti-war activists Bruce Gagnon and Regis Trembley. We were there as international observers at the second anniversary memorial for the victims of a fascist mob at the city’s House of Trade Unions.

The Odessa massacre was carried out less than three months after the coup of February 2014. Neo-Nazi organizations were violently suppressing any anti-coup forces. On May 2 the fascists drove a much smaller group of opponents into the trade union building and set it on fire. At least 46 people died – from the flames, smoke inhalation, gunshot wounds or beatings.

As preparations were being made for the 2016 memorial, organizations like the Azov Battalion, Right Sector and the Brotherhood were threatening to attack those attending the event with machine guns. The members of the Azov battalion had shoulder patches featuring the yellow lighting strike of a former Nazi SS unit. (The battalion has since been incorporated into the Ukrainian military, while Right Sector, at the invitation of the Ukrainian government, has participated as an independent militia in the fighting in Donbass.)

(After we returned to the U.S., we formed the Odessa Solidarity Campaign, which works to support family members of the massacre victims demanding an international investigation into the events at the House of Trade Unions, something the Ukrainian government, now a close U.S. ally, has blocked. You can find us on Facebook or at the Odessa Solidarity Movement Website)

What we are told on this side of the pond is that the problem in Ukraine is Russian aggression. What we don’t hear is that the present crisis is the direct result of the U.S.-promoted right-wing coup of 2014. Or that the coup was just part of the overall strategy of U.S. imperialism to reduce Ukraine to a vassal state and staging area for its own aggression against Russia, which is rapidly intensifying.

I don’t believe the real danger here is a war between the U.S, NATO and Russia. The U.S. doesn’t want to destroy Russia – it wants to dominate and exploit it.

I think the expansion of NATO and the increasing U.S. control over Ukraine is meant to force Russia to increase its military spending at the expense of domestic needs, which inevitably leads to internal tensions. For example, Russia’s 2016 military outlay of $69.2 billion was an increase of 5.9 percent over the year before. (Meanwhile, in 2016 the U.S. spent about $597 billion, almost as much as the next 14 countries combined. In 2015, the U.S. accounted for 37 percent of the world’s total military spending of $1.6 trillion.)

This was the strategy the U.S. under President Ronald Reagan followed with great success against the former Soviet Union. Today the strategy has been refined. Now the U.S. and an array of allied non-governmental organizations, or NGOs, seek out, train and generously finance internal dissidents, who then build mass movements by raising charges of corruption and undemocratic rule. The original charges may be correct, but the political movements they generate quickly become campaigns to replace the government with more Western-oriented ones that promote neoliberal policies of privatization, deregulation, social austerity and so-called ”free trade.”

Progressives who can recognize this strategy in Venezuela and Cuba sometimes become confused when the same strategy is applied to Ukraine, Russia or Iran.

Sisters and brothers, we have our work cut out for us. We need to take this information to the working people of the United States and all the countries of the world. We need to show how imperialist aggression abroad is intimately connected with attacks on working people and communities of color at home.

Hopefully, future mobilizations by the U.S. antiwar movement will reflect these concerns.

No to NATO! Stop the Wars at Home & Abroad! Jobs, Peace, Justice NOW!

Phil Wilayto is editor of The Virginia Defender quarterly newspaper, a member of UNAC’s Administrative Committee and coordinator of UNAC’s Odessa Solidarity Campaign. This report is based on a talk he gave at the Conference on U.S. Foreign Military Bases held Jan. 12-14 in Baltimore, Md. He can be reached at: .