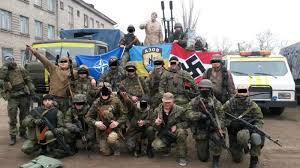 “While I recognize the danger of the violent right-wing movement, I am more concerned with the right-wing policies that are being enacted into law and policy by both Democrats and Republicans.”
https://blackagendareport.com/story-charlottesville-was-written-blood-ukraine

What is the character of racist right-wing politics today? Is it the crazed white supremacist who plows into an anti-fascist demonstration in Charlottesville, Virginia, or can it also be the assurance by Lindsay Graham that an attack against North Korea would result in thousands of lives lost…. but those lives will be “over there”? What about the recent unanimous resolution by both Houses of Congress in support of Israel and criticism of the United Nations for its alleged anti-Israeli bias? Would that qualify as racist and right-wing, since it appears that the ongoing suffering of the Palestinians is of no concern? And what about the vote by the U.S. House of Representatives to go even beyond the obscene proposal of the Trump administration to increase the military budget by $54 billion dollars and instead add a whopping $74 billion to the Pentagon budget?

What I find interesting about the current discussion around what many are referring to as the emboldening of the radical white supremacist right is how easy it is to mobilize opposition against the crude and overt white supremacists we saw in Charlottesville. So easy, in fact, that it’s really a distraction from the more difficult and dangerous work that needs to be done to confront the real right-wing power brokers.

The white supremacy that some of us see as more insidious is not reflected in the simple, stereotypical images of the angry, Nazi-saluting alt-righter or even Donald Trump. Instead, it is the normalized and thus invisible white supremacist ideology inculcated into cultural and educational institutions and the policies that stem from those ideas. That process doesn’t just produce the storm troopers of the armed and crazed radical right but also such covert true believers as Robert Ruben from Goldman Sachs, Hillary Clinton, Barack Obama, Tony Blair and Nancy Pelosi — “decent” individuals who have never questioned for a moment the superiority of Western civilization, who believe completely in the White West’s right and responsibility to determine which nations should have sovereignty and who should be the leaders of “lesser” nations. And who believe that there is no alternative to the wonders of global capitalism even if it means that billions of human beings are consigned permanently to what Fanon called the “zone of non-being.”

“The political impact of the right gaining power in Ukraine could not be isolated from the growing power of the right elsewhere.”

This is the white supremacy that I am concerned with. And while I recognize the danger of the violent right-wing movement, I am more concerned with the right-wing policies that are being enacted into law and policy by both Democrats and Republicans at every level of government.

More than two years ago I wrote that:
“The brutal repression and dehumanization witnessed across Europe in the 1930s has not found generalized expression in the U.S. and Europe, at least not yet. Nevertheless, large sectors of the U.S. and European left appear to be unable to recognize that the U.S./NATO/EU axis that is committed to maintaining the hegemony of Western capital is resulting in dangerous collaborations with rightist forces both inside and outside of governments.”

The impetus of that article was to critique the inherent danger of the Obama Administration’s cynical manipulation of right-wing elements in Ukraine to overthrow the democratically elected government of Viktor Yanukovych. Not only was it dangerous and predictably disastrous for the Ukrainian people, but because U.S. support for a neo-fascist movement in Ukraine took place within a context in which the political right was gaining legitimacy and strength across Europe. The political impact of the right gaining power in Ukraine could not be isolated from the growing power of the right elsewhere. Which meant that the Obama Admiration’s selfish, short-term objective to undermine Russia in Ukraine had the effect of empowering the right and shifting the balance of forces toward the right throughout Europe.