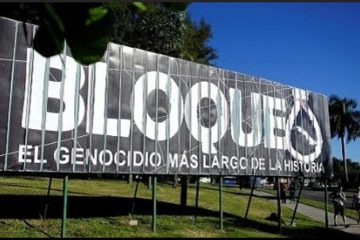 Image:  Billboard in Havana, Cuba that reads in Spanish: “Blockade, the longest genocide in history.” Nov. 1, 2018 | Photo: Reuters TeleSUR reported the following on November 1, 2018. Israel and the United States were once again the only two countries to vote in favor of the brutal economic blockade against Cuba. United Nations member states voted 189 to 2[…]