by Sara Flounders, published on Workers World, October 23, 2020 A powerful and forward-planning Workers Assembly Against Racism was held at Union Square in New York City on Oct. 18. Participants projected the possibilities of workers’ power through general strikes, shutdowns and mass actions to dramatically push back ongoing attacks — including police and racist violence, evictions, lack of stimulus[…]

END_OF_DOCUMENT_TOKEN_TO_BE_REPLACED 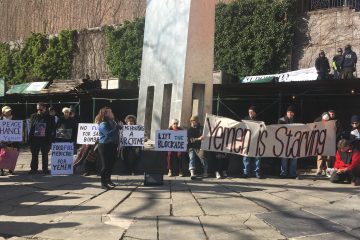 By Felton Davis of NYC Catholic Worker Below is the announcement sent out by Isaac at Action Corps NYC, and a couple of the photo sets from Monday’s demonstration across from the United Nations.  It was a long twenty hours “in the system,” as the process from the precinct through the labyrinth of basement holding cells, to the courtroom at[…]