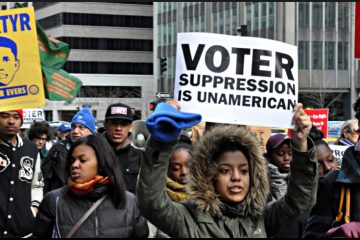 Image from North Carolina campaign against voter suppression in 2016. By NY Disabilities Bureau of Workers World Party posted on Workers World,  September 10, 2018 A proposal by the Randolph County, Georgia, Board of Elections to close seven out of nine polling places in one stroke before the November election has been defeated. The board’s rationale for its vote-suppressing plan[…]