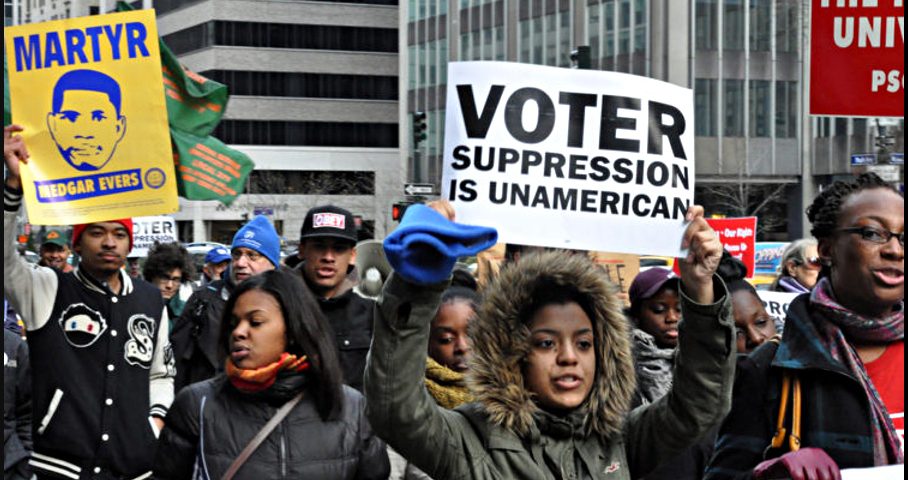 Image from North Carolina campaign against voter suppression in 2016.

A proposal by the Randolph County, Georgia, Board of Elections to close seven out of nine polling places in one stroke before the November election has been defeated. The board’s rationale for its vote-suppressing plan was that the polling places are not compliant with the Americans with Disabilities Act.

Randolph is a rural county with a 61 percent Black population.  One of the seven precincts designated for closure is 95 percent African American. Had the U.S. Supreme Court not gutted the Voting Rights Act in 2013, the closures would likely have been blocked by the U.S. Department of Justice.

Randolph County has no public transportation. If seven out of nine polling places were closed, voters without vehicles would have had to walk long distances, in one case 15 miles, to vote.

The election board’s move contradicts the intent of the Voter Accessibility for the Elderly and Handicapped Act of 1984, a law that disability groups fought hard to pass before the ADA existed. This statute focuses on federal presidential, not midterm, elections. It requires “polling places across the United States to be physically accessible to people with disabilities for federal elections. Where no accessible location is available to serve as a polling place, a political subdivision must provide an alternate means of casting a ballot on the day of the election.” This law also requires states to provide registration and voting aids for disabled and elderly voters, including information by TTYs (text telephones, also known as TDDs) or similar devices.

Nse Ufot, executive director of the New Georgia Project, a nonpartisan civic engagement group, said county election officials could have moved polls to local churches and other sites that are ADA compliant. “This is a blatant attempt at voter suppression,” she said.

It is highly significant that the election board voted to close the sites ahead of the upcoming midterm elections.  African-American gubernatorial candidate Stacey Abrams is favored to become the first Black female governor, not just in Georgia but in the history of the United States.

The Georgia chapter of ADAPT, the national grassroots community that organizes disability rights activists, did not mince words:

“[We] strongly condemn suppressing voting access under the semblance of protecting people with disabilities. … [C]ounty officials’ decision to invoke the ADA in order to suppress the vote of the predominantly black community is racist, ablest and deplorable.”

The REV UP Campaign (Register! Educate! Vote! Use your Power!) also opposed the ruling, calling it “a total misuse of the ADA and all that it stands for.  REV UP Georgia rejects this justification on every level.”

The Arc Georgia, an organization of people with intellectual and developmental disabilities, found it “shocking to learn that instead of working to fix inaccessible polling places and bringing them into compliance with the ADA, officials are willing to close them.”

A spokeswoman for the National Council on Independent Living pointed out that one of the polling places selected to be closed was a middle school. “If it’s inaccessible, how are disabled kids going to get an education?”

Community reaction was swift and sure. The American Civil Liberties Union began mobilizing immediately.  Activists scrambled and collected enough signatures to stop the plan before the next meeting of the election board.  Voting rights groups and disability rights advocates joined the fight. “We’ve been here before,” commented one veteran of the civil rights and voting rights movement of the 1950s and 1960s.

The proposal was soundly defeated.

Randolph County is not the first to invoke the ADA as a pretext to disenfranchise minority voters.  Jim Tucker, an attorney and member of the Native American Voting Rights Coalition, said he learned earlier this year that the Department of Justice is targeting at least three majority Native  counties where polling places lack paved parking lots, designated disabled parking spots, entrance ramps, wide doorways and other ADA-required features.

Andrea Young, executive director of the ACLU of Georgia, described using the ADA to close polling places in minority areas as “putting sheep’s clothing on a wolf. … We support bringing public building into compliance with the ADA.  Closing these places will not do that.”