by Nick Baker, published on Socialist Action, July 9, 2019 As U.S. imperialism ceaselessly spreads its tentacles around the globe, its latest victim, yet again, is Iran, the strategically located oil-rich Middle Eastern nation that has resisted U.S. and British colonial domination for over a century. Since its 1979 Revolution that ousted the murderous dictatorship of Shah (meaning “King”) Reza[…]

END_OF_DOCUMENT_TOKEN_TO_BE_REPLACED 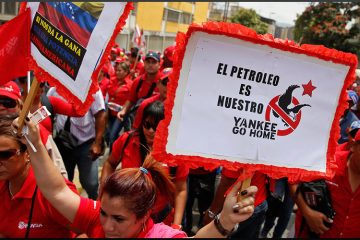 by Alison Bodine, Published on Fire This Time, September, 2018 On August 6, 2018, thousands of people in Venezuela just marched in the streets of the capital city Caracas in support of President Nicolas Maduro and the Bolivarian revolutionary government of Venezuela. They marched despite the violence and terror that had been inflicted on their country with the August 4[…]