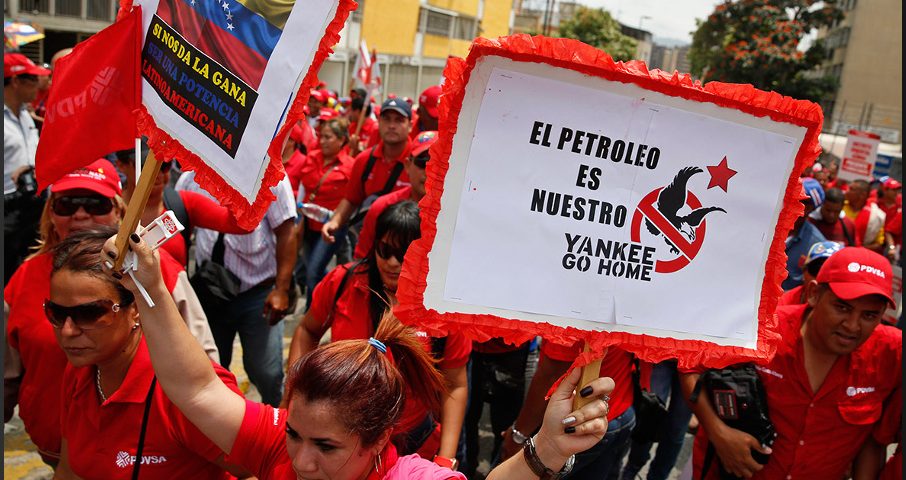 by Alison Bodine, Published on Fire This Time, September, 2018

On August 6, 2018, thousands of people in Venezuela just marched in the streets of the capital city Caracas in support of President Nicolas Maduro and the Bolivarian revolutionary government of Venezuela. They marched despite the violence and terror that had been inflicted on their country with the August 4 assassination attempt against President Maduro carried out by the right-wing criminal group called “Soldados de Franelas, (Soldiers in T-shirts).” With banners, signs, and flags held high they proudly marched to defend their sovereignty, self-determination and democratic rights.

Sanctioning the Government or the People of Venezuela?

Illegal and criminal sanctions are being leveled against Venezuela by the United States, Canada, the European Union, Switzerland and Panama. These sanctions combined with continued imperialist support for Venezuela’s violent counter-revolutionary right-wing have imposed a manufactured crisis on the people of Venezuela.

This brutal regime of sanctions has made it impossible for the government of Venezuela to interact with the world financial and trade markets normally. The U.S. sanctions, added to the classification of Venezuela as an “extraordinary threat” to the national security of the United States by President Obama in 2015, have destroyed Venezuela’s credit rating, further strangling the economy. This means that the government of Venezuela is unable to buy the medicines, foodstuffs and basic that the people of Venezuela need. It doesn’t have the cash or the credit that it needs to maintain a normally functioning economy.

As stated by Alfred de Zayas, United Nations Independent Expert on the promotion of a democratic and equitable international order in his official Report to the UN released in August 2018,

“Modern-day economic sanctions and blockades are comparable with medieval sieges of towns with the intention of forcing them to surrender. Twenty-first-century sanctions attempt to bring not just a town, but sovereign countries to their knees. A difference, perhaps, is that twenty-first-century sanctions are accompanied by the manipulation of public opinion through “fake news,” aggressive public relations and a pseudo-human rights rhetoric to give the impression that a human rights “end” justifies the criminal means.”

This is the reality that the people of Venezuela are facing. Their human rights are being thrown about as collateral in a vicious imperialist campaign for ”regime change.” Sanctions are 300,000 doses of insulin held up in Venezuelan ports when companies refuse to accept payments due to sanctions, shipments of malaria medication from Colombia stopped due to U.S. pressure. Citgo, a Venezuelan government subsidiary in the U.S. barred from transferring dividends or sending profits; billions of dollars meant for the purchase of foods and medicines frozen in international financial services companies.

This month, U.S. sanctions against Venezuela were also used to silence an important voice against imperialism, by forcing shut-down of the Empire Files program on TeleSur. The TeleSur network, which was launched in 2005, is funded through Venezuela, Cuba, Uruguay, Nicaragua and Bolivia. U.S. sanctions ultimately made it impossible for TeleSur to continue funding and supporting journalist Abby Martin and Empire Files, which has released hundreds of documentaries, including those that expose the role of the U.S. government and their allies in Venezuela.

The U.S. government has also been working to get other Latin American countries on board for their campaign of sanctions, isolation and intervention against the democratically elected government of Venezuela. Most recently, Defense Secretary James Mattis visited Brazil, Argentina, Chile and Colombia on a trip that as reported State Department

“underscores the department’s strong defense ties… adding that these relationships are critical to a collaborative, prosperous and secure Western Hemisphere.”

Only three countries share borders with Venezuela, and Mattis visited two of them. No doubt top on the agenda was promoting further meddling and intervention in Venezuela. In fact, the stated purpose of previous trips to Latin America by U.S. government officials has included working to convince them to put sanctions on Venezuela.

Despite these escalating imperialist attacks, there are indications that the U.S. government is becoming frustrated that the people and government of Venezuela are not “falling to their knees” under the sanctions and playing into their plan for “regime change” in Venezuela. In an article published by the McClatchy news agency on August 24, anonymous senior officials from the U.S. government are quoted as saying

“Some administration officials are worried that Venezuela’s problems are becoming the new normal. People inside, who want change, whether it’s the opposition, military or private sector need to take more aggressive steps. We need the people to stand up,” and “At some point, the region has to take a step back from its standard line of we will not interfere in another country’s politics.”

To destroy the will of the people of Venezuela for self-determination, sovereignty and independence, the U.S. government and their allies must not only starve their bodies, but they must also silence their voices.

On the same day as the assassination attempt against President Maduro, Nikki Haley, the United States Ambassador to the United Nations wrote an Op-Ed in the Miami Herald titled “Colombia Is on the Right Path.” Her article is an attack on the democratic system and expression of the people of Venezuela. In comparison to the “toxic dictatorship of Nicolas Maduro,” Haley proposes the success of the Colombian “freedom model” as “an example for the region.”

However, she fails to mention that in Colombia, which “presents a model for their democratic aspirations” for the people of Venezuela and Nicaragua, at least 158 community leaders and human rights defenders have been killed in 2018. Nor does she mention just how since 2000, the U.S. has given $9.5 billion to Colombia in “U.S. Security Assistance.” (Washington Office on Latin America – WOLA). In fact, Venezuela, Bolivia and Cuba are the only countries in Latin America that do not receive such “assistance” from the U.S. government. Colombia has also recently joined the U.S.-led military alliance NATO, sending a clear signal to the United States, Latin America and the world that they are firmly on the side of the U.S. government and their allies.

Time and time again the democratic expression of the people of Venezuela is sanctioned by the U.S. government and their allies, including Canada. One year ago, on July 31, 2017, the people of Venezuela elected the National Constituent Assembly, putting an end to four months of violence and rioting by the U.S.-backed right-wing opposition that killed over 100 people. Following this election, the U.S. government increased illegal sanctions against Venezuela as U.S. President Trump declared that a military intervention in Venezuela is an option that the U.S. “certainly could pursue.”

When the people of Venezuela went to the polls for the May 20 Presidential election, they knew that re-electing President Maduro would result in more sanctions and hardships for the Venezuelan economy, but over 5.8 million people, 67.7% of the vote, still cast their ballots for Maduro.

As with the other 24 national elections held in Venezuela since the Bolivarian revolutionary process began, international observers declared the election to be free, fair and transparent. This Presidential election used the same system of voting and democratic process as when former U.S. President Jimmy Carter declared Venezuelan elections to be the “best in the world.”

People and Government of Venezuela are Defying Imperialism

Over the 20 years of the Bolivarian process in Venezuela, the majority of people in Venezuela have experienced a massive change in their quality of life. Through Venezuela’s government programs known as Missions, primary healthcare has been brought to the most vulnerable people of Venezuela; more than 2.7 million Venezuelans have been taught to read, and over 2 million homes have been given to low-income Venezuelans. In 2015, the UN announced that Venezuela had reduced malnutrition 50%, following their announcement in 2013 that extreme hunger and poverty in Venezuela had also been reduced by 50%, all major milestones in the UN’s Millennium Development Goals.

Gains of this magnitude were only possible when the United States and their allies were kicked out of the country, as Venezuelans began working to reverse the devastating effects of over 500 years of colonialism and capitalist exploitation of their lands and peoples.

When multi-national corporations such as Clorox, Kimberly Clark and Kellogg’s shut down their factories in Venezuela, the Venezuelan government nationalized them to maintain their production of products vital to the people of Venezuela. That is how a Kimberly Clark plant manufacturing diapers and tissues were transformed into the Cacique Maracay Productive Plant, named after an Indigenous leader who fought against Spanish colonialization.

Despite nationalizations and an effort to diversify the economy, the majority of basic goods and food in Venezuela are still produced and distributed by the capitalist class of Venezuela. This has allowed them to wage an economic war through slow-downs in production, price gouging, speculation, hoarding, boycott and economic destabilization. The government of Venezuela is arresting and prosecuting those responsible for the economic sabotage, while at the same time utilizing the power of community organization to ensure that food and basic goods make it into the hands of the people who need it most in Venezuela through the CLAP (Committees for Local Distribution) program.

Despite the devastation imposed on their economy, Venezuela also continues to build regional solidarity through the Bolivarian Alternative for the Americas (ALBA), which was founded under the leadership of Hugo Chávez and Cuba’s Fidel Castro. ALBA allows for trade between countries through goods and services, as well as through monetary exchange.

On the ground in Venezuela, people continue to support their democratically elected government of President Maduro and the Bolivarian revolutionary process, not only through votes but in their actions and organizing in all sectors of Venezuelan society. Through building communes, social missions and social movements, people in Venezuela are mobilized in defense of their democratically elected government, and the gains that they have achieved through the Bolivarian revolutionary process.

Why working people must defend Venezuela

From August 31 to September 11, the United States, Canada, the UK and eight other right-wing Latin American countries are carrying out the “UNITAS LIX” military exercises in Colombia, a country that shares a 2,200km border with Venezuela. This is no coincidence. As the U.S. government and their allies, including Canada, expand draconian sanctions, their threats and rhetoric for further intervention, including military, also escalate.

It is increasingly urgent for peace-loving people around the world to take an objective look at what is happening in Venezuela today. If Venezuela wasn’t attacking imperialist interests in Latin America, if they were not threatening U.S. hegemony, they would not be under constant attack. The people of Venezuela and the government of President Maduro are defending their sovereignty, self-determination and human and democratic rights. These are rights that are inherent to all peoples and oppressed nations, and they must be defended.