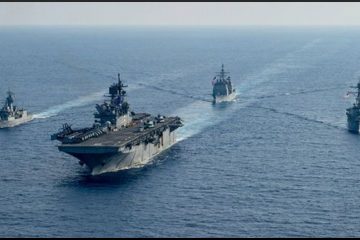 By Peter Symonds , published on World Socialist Website, 23 April 2020 As it rapidly escalates its propaganda offensive against China, the Trump administration has provocatively sent US warships into the South China Sea. The US Navy announced on Tuesday that the amphibious assault ship USS America along with two guided-missile destroyers, USS Bunker Hill and USS Barry, were operating[…]