As you can see from our petition, we have been seeking to approach Larry Krasner diplomatically. In our effort to attract the widest possible range of supporters, we have written the petition with polite language. We are trying to give DA Krasner the benefit of the doubt by considering the possibility that he is sincere in his stated desire to confront Philadelphia’s ugly history of racial injustice.

For Mumia’s sake, we truly hope that DA Krasner’s defense of Mumia’s conviction is because he has not actually researched the case himself, that his position on Mumia’s case is simply a product of the Philadelphia corporate media’s well-documented bias against Mumia. We are sincerely presenting him with an opportunity to rethink his position and to do the right thing. We hope that he listens.

Unfortunately, on Feb. 3, Krasner filed a new brief in Mumia’s case, where he continued to defend the legitimacy of Mumia’s 1982 conviction. DA Krasner’s several years of opposing Mumia’s appeals has already been vile and disgusting. However, with this new brief, he somehow manages to stoop even lower.

There is much to criticize about DA Krasner’s Feb. 3 brief, but one particular aspect really stood out for me. On Page 5, in the section titled “Statement of Facts,” the brief states:

“Officer Faulkner was put in a police van and rushed to Jefferson University Hospital. When the police attempted to handcuff defendant and place him in a police wagon to transport him to the hospital, he violently resisted. He continued to struggle against the officers when they subsequently brought him inside the hospital, the same one in which doctors were attempting to save Officer Faulkner’s life. The officers carrying defendant – he refused to walk – temporarily placed him on the floor of the lobby next to the entrance to the emergency room.”

Has DA Krasner actually read the trial transcripts? If so, does he realize the implications of him describing Mumia’s arrest in such a despicable way? What actually happened that morning when police arrived on the scene was an attempted lynching of Mumia, with the police acting as the white supremacist lynch mob. 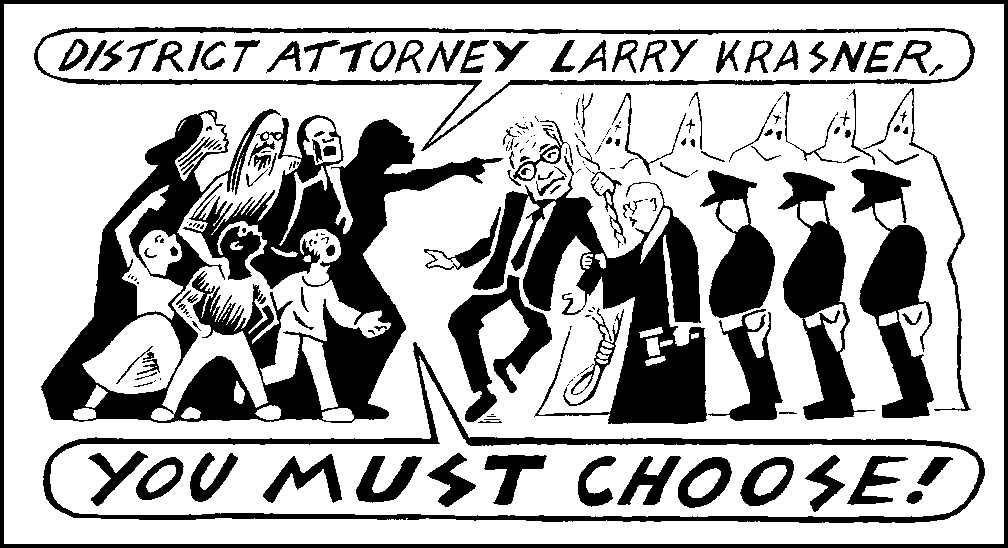 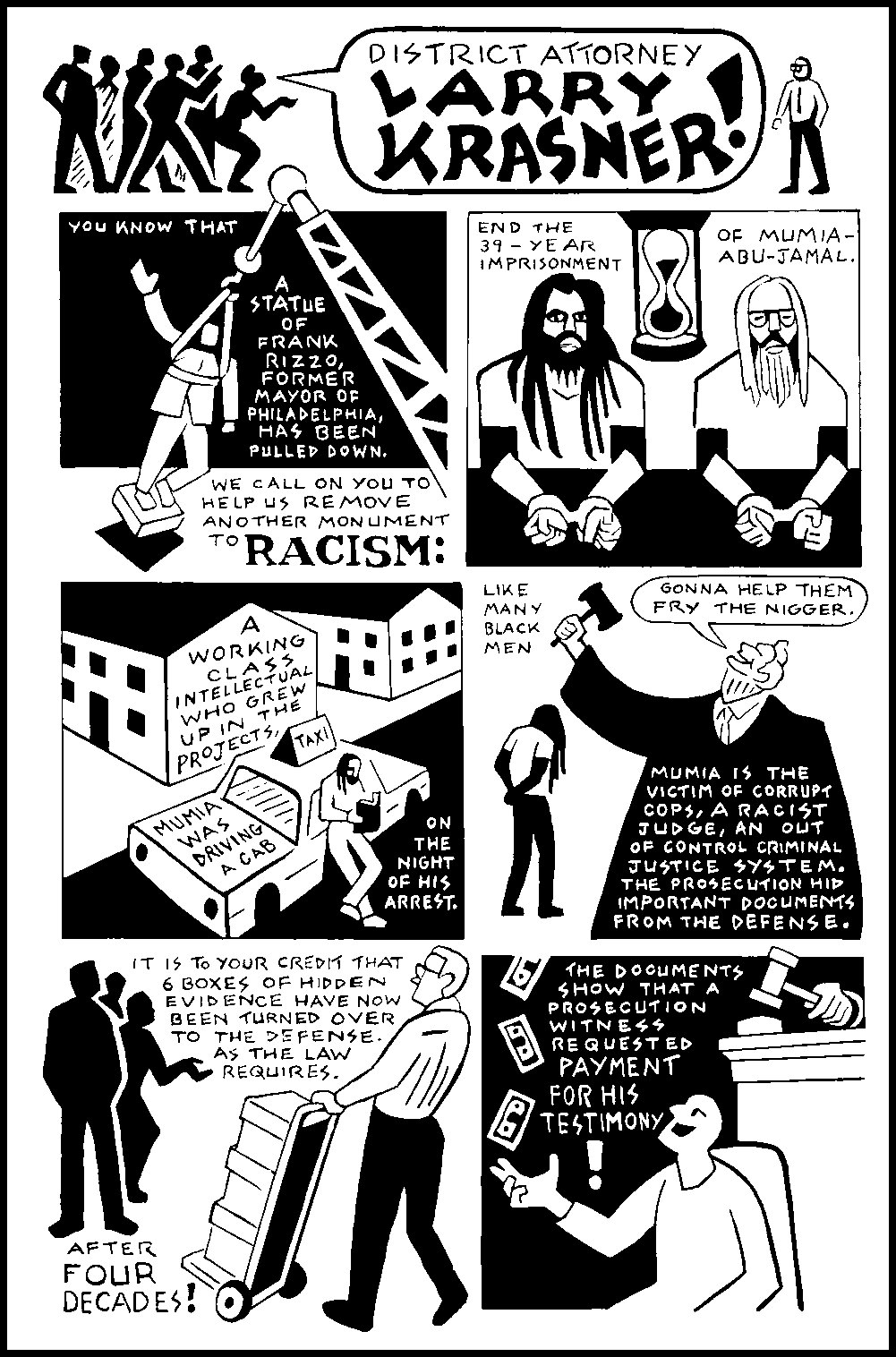 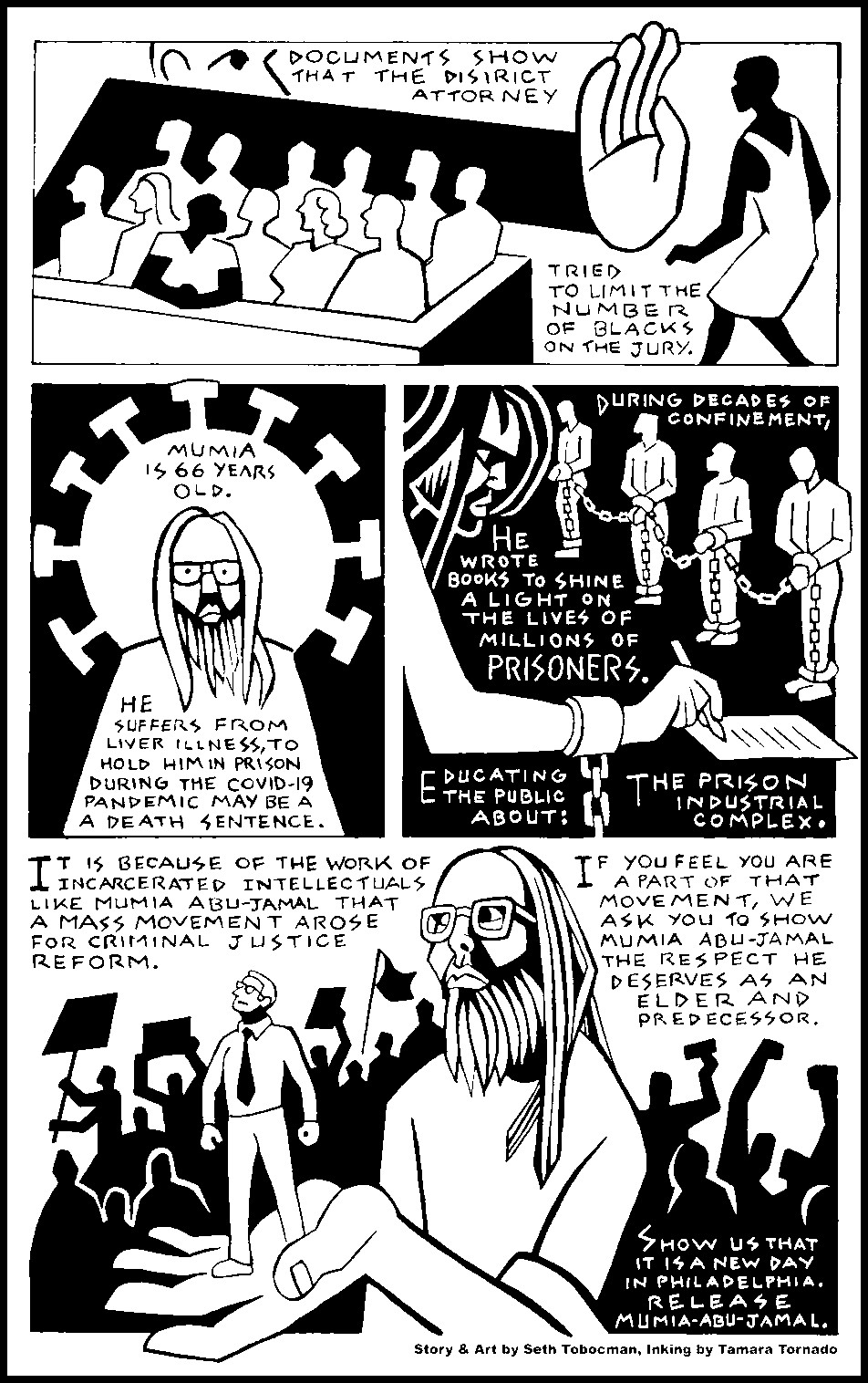 This anti-lynching cartoon by anti-racist activist Seth Tobocman depicts Philadelphia District Attorney Larry Krasner with a choice to make. The white supremacist FOP-led lynch mob wants DA Krasner to help them kill Mumia, while Mumia’s family and friends call on DA Krasner to stand up to the FOP-led lynch mob.

Before even speaking with a single eyewitness, the mob of cops brutalized Mumia so viciously that when his sister Lydia arrived at the hospital she could not even recognize him. Make no mistake: The cops wanted him to die from the gunshot wound before receiving medical treatment, ultimately taking over 30 minutes to begin treatment at the hospital. This was an obvious attempt to execute him before even conducting an investigation, let alone a fair trial.

Has DA Krasner read the trial testimony of defense witness Dessie Hightower who reported seeing someone flee the crime scene immediately after the shooting? At trial, Hightower described Mumia’s arrest as being “an attack” by the police. In his book “The Framing of Mumia Abu-Jamal,” author J. Patrick O’Connor summarizes Hightower’s trial testimony:

How could DA Krasner possibly write such an offensive description of Mumia’s treatment by police, like claiming that Mumia “refused to walk” into the hospital after he had been shot in the chest and nearly beaten to death?

“He said that shortly after the first police officer showed up, about eight or nine other officers arrived. He then observed three or four of them striking Abu-Jamal with nightsticks while one or two others were kicking him and pulling him by his dreadlocks. He also saw the police, in carrying Abu-Jamal to the police van, ram his head into a no-parking pole and drop him to the ground.”

Has DA Krasner read the trial testimony of Dr. Regina Cudemo, who was working at the hospital when Mumia arrived? If not, author J. Patrick O’Connor has also summarized her account:

O’Connor also writes that after Mumia was dropped on the floor of the entryway to the emergency room,

“instead of taking Abu-Jamal to an operating room, hospital security guard Priscilla Durham had the police drag him to the family room.”

Abu-Jamal was brought handcuffed to the emergency room for surgery.”

Does DA Krasner think that an attempted police lynching of a prominent Black journalist, loving father and respected community activist is some kind of joke? If he has read the trial testimony of Dessie Hightower and Dr. Regina Cudemo, why is he not concerned about Mumia’s treatment by police that morning?

Lastly, how could he possibly write such an offensive description of Mumia’s treatment by police, like claiming that Mumia “refused to walk” into the hospital after he had been shot in the chest and nearly beaten to death? We need answers from DA Krasner.

Pam Africa is an activist deeply embedded in social justice work in Philadelphia and considered “one of the most significant rights leaders in the past 40 years.” She is the coordinator of the uncompromising International Concerned Family & Friends of Mumia Abu-Jamal (ICFFMAJ).