The Biden administration is intensifying its aggression against China. The Pentagon’s new Pacific Deterrence Initiative includes increasing the U.S. military’s encirclement of China and deploying nuclear missiles that had previously been banned by the U.S.-signed Intermediate Range Nuclear Forces Treaty.

Recently, President Biden met with leaders of Japan, India and Australia – what has become known as the “Quad,” a military and economic alliance against China. The Pentagon is calling for its annual Pacific budget to be doubled over last year’s $multi billion allocation.

U.S. military bases around the world 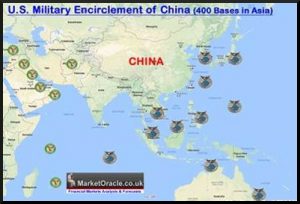 During their recent visit to Japan U.S. Secretary of State Anthony Blinken and Secretary of Defense Lloyd Austin threatened to “push back” against Chinese  “aggression.” These Chinese “aggressors,” we note, have a single military base outside its border, in Djibouti, Africa. In contrast, the U.S. military has more than 20 times the number of foreign military bases as all other countries combined and has its military in 172 countries. Its imperial arsenal includes maintaining mercenary armies, death squads, Special Operation assassination teams, drone war murders as well as deadly sanctions, blockades and embargoes against some 39 nations.

Biden is maintaining the near $1 trillion in punitive tariffs imposed by the Trump administration on Chinese goods.

“China is the only country with the economic, diplomatic, military and technological power to seriously challenge the stable and open international system, all the rules, values and relationships that make the world work the way we want it to, because it ultimately serves the interests and reflects the values of the American people.” (Emphasis added.)

In our view Blinken’s “we” refers solely to the interests of the U.S. corporate elite, not the people of the US.

The “international system” that Blinken refers to is the one that established the U.S. after World War II with unquestioned military and economic superiority. The U.S. dollar was established as the world’s reserve currency. The U.S. corporate elite resent any challenge to their domination.

Today, the U.S. “Pivot to Asia,” first established under the Obama administration, includes the presence of warships and massive military forces throughout the Asian Pacific region.

China has not reciprocated in the Gulf of Mexico or military forces encircling U.S. borders.

The U.S. claims to be the champion of freedom and democratic rights around the world, yet it has been challenged in its own borders by the largest democratic, human rights and anti-racist mobilizations in the modern era, with some 20 million Black, Latino, Asian American and Native American protestors joined by white working class youth mobilizing in 2,000 U.S. cities decrying U.S. systemic racism and demanding Black Lives Matter! The U.S. has no standing to demand of others what it denies to its own poor and oppressed people.

The U.S. threatens China while its “friends,” such as the brutal rulers of Saudi Arabia, the Philippines, Haiti and Israel, are spared any criticism since they support U.S. imperial policies around the world.

Recently, the U.S. Indo-Pacific Commander, Adm. Philip Davidson told a Senate Armed Services Committee that China is the only nation with the economic, diplomatic, military, and technological power to challenge the United States.  He stated, “I think the threat is manifest during this decade, in fact, in the next six years.” Davidson continued, “We absolutely must be prepared to fight and win should [this economic] competition turn to conflict.” Davidson’s “fight and win!” evinces an irrational threat of nuclear war. The U.S. and its British junior imperialist partner are increasing their nuclear capabilities while Biden pursues Trump’s Space Force, threatening to extend the arms race into space.

The COVID-19 crisis of this past year has been used to accelerate U.S. aggression towards China. China was able to employ decisive measures to contain and defeat the virus and return to economic growth. It has sent its vaccines to poorer countries along with other medical aid. In sharp contrast, the U.S. has failed to contain the virus. It has recorded more deaths and infections than any other country; its economy has not recovered. During the pandemic the U.S. has increased sanctions on countries that refuse to abide by Washington and Wall Street dictates. These have included increased sanctions on medicine and medical equipment. These facts have not been lost on the people of the world or the people in the U.S.

The right of self-determination

UNAC supports the right of oppressed nations to self-determination, that is, to be free from military intervention and economic domination. This includes their right to seek and accept aid from other nations to help defend their sovereignty, as with Venezuela, Iran, and Syria. It includes their right to be free from U.S. threats of war, regime change and intervention.

[UNAC is a broad national antiwar organization with 160 affiliates in cities across the U.S. We are united in opposition to all U.S. wars against working people at home and abroad. While our affiliates have a broad range of views on the policies and practices of the governments of other nations, we stand together in defense of their right to be free from U.S. domination.]