One of the pre-conditions for Soviet support for the reunification of East & West Germany was the promise from the US that NATO would not expand ‘one centimeter’ toward the Russian borders.  The Soviet Union’s Warsaw Pact alliance folded after its collapse thus making no need for NATO. Instead since those days NATO has been on steroids and is now working to become a global alliance.

The US rejects that any promise was made not to expand NATO – hardly a surprise.  Just ask Native Americans about promises from The Great White Father in Washington.

In 2017 The National Interest reported:

Soviet leader Mikhail Gorbachev was given a host of assurances that the NATO alliance would not expand past what was then the East German border in 1990 according to new declassified documents.

Russian leaders often complain that the NATO extended an invitation to Hungary, Poland and what was then Czechoslovakia to join the alliance in 1997 at the Madrid Summit in contravention of assurances offered to the Soviet Union before its 1991 collapse. The alliance has dismissed the notion that such assurances were offered, however, scholars have continued to debate the issue for years. Now, however, newly declassified documents show that Gorbachev did in fact receive assurances that NATO would not expand past East Germany.

“The documents show that multiple national leaders were considering and rejecting Central and Eastern European membership in NATO as of early 1990 and through 1991,” George Washington University National Security Archives researchers Svetlana Savranskaya and Tom Blanton wrote. “That discussions of NATO in the context of German unification negotiations in 1990 were not at all narrowly limited to the status of East German territory, and that subsequent Soviet and Russian complaints about being misled about NATO expansion were founded in written contemporaneous memcons and telcons at the highest levels.”

But why would the US & NATO continue to deny that promises had been made about NATO expansion? What is the purpose today of NATO moving into the Asia-Pacific as it signs up nations like Australia, New Zealand, Japan, South Korea, Mongolia and more as ‘NATO Partners’.

The United Nations monopoly of the use of force, especially as specified in Article 51 of the Charter, is no longer accepted under NATO’s new aggressive doctrine. That new NATO doctrine calls for NATO’s territorial scope, originally limited to the Euro-Atlantic region, to be expanded to encompass the whole world.

NATO wishes to cut out Russia and China (both serve on the UN’s Security Council and have the power to veto UN military operations) in order to give Washington and Brussels (where NATO is headquartered) the power to intervene in any part of the world without restriction – mostly for ‘regime change’ operations.  Thus NATO’s real goal is to replace the United Nations with a non-democratic tool under full corporate control.

In essence NATO becomes Mr. Big’s Army which could run the world on behalf of corporate interests.

The first indication that the United Nations was marked for marginalization, selective application (and exploitation) or even de facto dissolution, however, occurred …. in 1996 when the United States single-handedly browbeat the other fourteen then members of the Security Council to depose Secretary General Boutros Boutros-Ghali and replace him with Kofi Annan, who the preceding year had been appointed UN special envoy to NATO and authorized the NATO bombing in Bosnia behind the back of Boutros-Ghali.

Boutros-Ghali was deprived of the traditional second term for not authorizing NATO’s bombing of Bosnian Serb targets in 1995 and for speaking the truth about the deadly Israeli bombing of a refugee camp in Qana, Lebanon in the following year when 106 civilians were killed and 116 injured.

“[Madeleine] Albright and I and a handful of others (Michael Sheehan, Jamie Rubin) had entered into a pact together in 1996 to oust Boutros-Ghali as Secretary General of the United Nations, a secret plan we had called Operation Orient Express, reflecting our hope that many nations would join us in doing in the UN head.

“In the end, the US had to do it alone (with its UN veto) and Sheehan and I had to prevent the President from giving in to pressure from world leaders and extending Boutros-Ghali’s tenure, often by our racing to the Oval Office when we were alerted that a head of state was telephoning the President. In the end Clinton was impressed that we had managed not only to oust Boutros-Ghali but to have Kofi Annan selected to replace him.”

The Russians and Chinese (among others) are not at all willing to allow this power grab by NATO. Unfortunately most Americans know little to nothing about this plan for global domination by the ‘Atlantic alliance’.  The corporate dominated media in the US hides the real agenda from the public.

Despite attempts by individual politicians to assign international functions to NATO, the Western military bloc will never replace the UN, says Russian Foreign Minister Sergey Lavrov, who [was] in New York for the 66th UN General Assembly Session.

“NATO – or to be more exact, some of its representatives – has been attempting to assume the role the UN plays since the 1990s,” Lavrov said in an interview…. The Russian Foreign Minister said this behavior continued “until the 2003 invasion of Iraq, when Germany and France did not support their NATO allies.” At this point in history, Lavrov said, NATO was forced to acknowledge that “the international community does not recognize its operations as legitimate if they are not approved by the UN Security Council.” 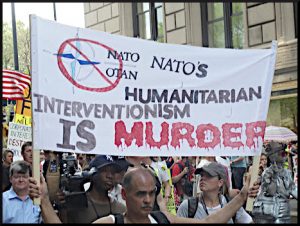 But Washington and Brussels don’t intend to fold their militaristic tent so easily.  Thus we saw their illegal regime change operation in Libya and today their war in Syria. We see the attempts to pull NATO members and partners into the encirclement of China. And we witness the pressure (from Republican and Democrat administrations in Washington) to force NATO members to pay larger annual appropriations for alliance operations.

The United Nations and NATO are two distinctly different organizations.  The UN tries to keep the peace and to attempts to fund human development.  NATO is simply a war machine.

It is time for NATO (which has no true reason to exist) to close up shop. It is time for the peace movements across the west to demand that NATO pass on like the Soviet-era Warsaw Pact did.

Bruce Gagnon is a long time political activist and blogger.  He is the originator of the Keep Space for Peace campaign.