Secretary of State Mike Pompeo’s visit to Thessaloniki and Crete in Greece on September 28-30—the second tour in the span of a year and only a few weeks before the U.S. presidential elections—furthers the aggressive U.S. agenda shaping the latest political developments in the region.[CV Ed]

The real purpose of Pompeo’s visit was to augment the militarization of Crete and the U.S. military and economic supremacy in the region.

Regardless of the outcome of the elections on November 3, the strategic policy of the U.S. in Greece and the Balkans will not alter significantly from this goal. Pompeo is not only the head of U.S. diplomacy but also the former Director of the CIA. The current head of the Greek Secret Services (EYP), Panayiotis Kontoleon, was formerly employed by the U.S. embassy in Athens to provide for its security.

Greece is being considered as a new fulcrum for U.S. plans in the wider region of the Balkans and the Middle East, including the Arab Gulf countries, Israel and the southeastern Mediterranean. The longer-term targets include Syria, Lebanon, Iran, and Russia’s southern military front.

As CAM previously reported, Greece’s strategic significance has increased because of the U.S. turn away from Turkey. Turkish President Recep Tayyip Erdoğan is no longer seen as a reliable ally because of (1) his growing ties to Russia, (2) his attacks on America’s Kurdish allies in Syria, and (3) his belief that the U.S. was behind the 2016 coup attempt to oust him from office.

During Pompeo’s visits to Thessaloniki and then to Chania in Crete and the U.S. military base nearby at 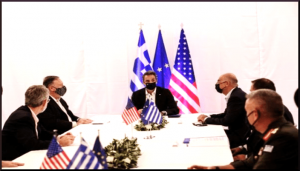 Souda, there were meetings with the Minister of Defense Nikos Panagiotopoulos; Greece’s Foreign Affairs Minister, Nikos Dendias; and Minister of Energy, Environment and Climate Change, Kostas Hatzidakis. He also held meetings with Adonis Georgiadis, Minister of Development and Investments alongside the League of Greek Industrialists (SBE). In this latter context, a meeting was held between various Greek companies and U.S. companies such as Cisco Systems and Deloitte with the intermediation of the U.S. embassy. The accounting firm Deloitte is a major player in U.S. military and intelligence projects.

Greece reaffirmed its commitment to coordinate its controversial maritime delimitation issues with the U.S. and their close cooperation, as NATO allies, in the wider region.

This includes cooperation in various sectors in the framework of the 3+1 format (Cyprus, Greece, Israel, and the United States). They reiterated their support for the integration of all the countries in the western Balkans into European and transatlantic institutions, including Alexis Tsipras’s Prespes Agreement of June 18, 2018, which facilitated North Macedonia’s subsequent accession to NATO.

Subjects of the discussions

Pompeo and his Greek allies reaffirmed their intent to further enhance the U.S.-Greece Mutual Defense Cooperation Agreement, which was last updated in October 2019, and the integration and interoperability of their militaries.

The most important deal that Pompeo managed to achieve was the extension of U.S. control of the Souda base in Crete.  A new deal was struck concerning the permanent docking of the USS Hershel ‘Woody’ Williams in Souda base. It is a platform and helicopter carrier which also serves as a repair ship for the U.S.Sixth Fleet in the region.

In other words, Souda will become the largest and most important U.S. naval base in the eastern Mediterranean with 25,000 personnel in the next few years.

Moreover, the official joint speech between Mike Pompeo and Kyriakos Mitsotakis took place at the U.S. Souda Base: Mitsotakis was there on U.S.—not Greek—military turf, notably not in Athens.  Greece has based its Air Force 115 Combat Wing, which utilizes Lockheed’s F-16s, at Souda.

Greece confirmed the renovation of part of its F-16 fleet[1] by Lockheed Martin, securing the company’s interests in Greece even though the French Dassault Aviation Company sold 18 Rafale Jets to Greece on September 10.

While Pompeo was still CIA Director and ExxonMobil’s Rex Tillerson was Secretary of State, on October 17, 2017, U.S. President Donald Trump met with Greek Prime Minister Alexis Tsipras in Washington, D.C. Trump, who has repeatedly criticized NATO countries for not meeting the alliance’s defense budget targets, applauded Greece for meeting the goal of each member spending two percent of their gross domestic product.

“They’re upgrading their fleets of airplanes—the F-16 plane, which is a terrific plane,” Trump said two years ago, ahead of a bilateral meeting. “They’re doing big upgrades.”

According to the U.S. Defense Security Cooperation Agency, the complete package included the necessary components to bring 123 of Greece’s existing F-16C and D fighter jets up to Lockheed Martin’s new F-16V standard, which the company first introduced in 2012. The upgrades include, among other things, new mission computers, navigation systems, multifunction displays, Advanced Identification Friend or Foe (AIFF) transponders, and the Link-16 tactical data link. The F-16C/D already has expanded range and an ability to utilize more advanced weapons systems.

Despite the global pandemic, outstanding U.S.-Greece law enforcement cooperation on arrests, seizures, and extraditions has continued unabated. The U.S. has insisted that Greece’s future role as a base for U.S. regional operations would require local security measures including border security and counterterrorism information sharing and collaboration. Greece and the U.S. committed to full implementation of the 2016 Joint Statement on Greece’s participation in the Visa Waiver Program, including beginning issuance of an updated national identification card and fully collecting and analyzing air passenger data.

Both sides welcomed the September 22 formal establishment of the EastMed Gas Forum as a regional organization and the ongoing successful cooperation on energy through the 3+1 process.  Greece and the United States underlined the participation of ExxonMobil in partnership with Total and Hellenic Petroleum in offshore exploration blocks off the coast of Crete, as well as the potential opportunities for U.S. investment in the renewable energy sector, with the recently ratified Greek Law “Modernization of Environmental Legislation.”

Another point in the current discussions that was almost omitted by the Greek media was the privatization of Kavala and Alexandroupoli ports in northern Greece for the transport of U.S. liquefied natural gas (LNG), thus interrupting the Russian gas pipelines in the region. This was made possible through Black Summit Financial Group which invested heavily in the region. Pompeo was very cunning in blocking Russian and Chinese economic interests in the region by using Greece’s strategic position and the subservience of the Kyriakos Mitsotakis government.

Greece assured its patron of a secure investment environment for U.S. capitalist plunder including further privatization of strategic infrastructure. It also welcomed the inauguration of new investments and acquisitions by U.S. companies in Greece and reaffirmed its commitment to encourage that trend. Other measures related to intellectual property concessions enacted in 2019, which resulted in Greece’s removal from the Office of the United States Trade Representative’s Special 301 Report this year.  Other subjects included cooperation on artificial intelligence, cyber security and 5G.

Another very interesting point from this official visit is the confirmation of Greece and its biggest telephone company COSMOTE to cease using the Chinese 5G technology, developed by Huawei, in favor of technology developed by Ericsson.  Despite the absence of reference to this subject in the Greek media, it was very high on the priority list of the State Department.

This is not the first time that U.S. commercial opponents have been extorted and blocked, reminiscent of a more sophisticated version of 20th century “gunboat” diplomacy.

Securing the U.S. Presence in the Eastern Mediterranean

From the standpoint of U.S. strategy in the region, the trip was a remarkable success since it guarantees its presence in the Eastern Mediterranean and ensures U.S. influence in regional geopolitical developments for the next decades. With ExxonMobil heavily invested in Crete and Cyprus, and U.S. political and military plans regarding Turkey remain apparently unclear, Pompeo chose not to comment on the growing Greek-Turkish conflicts. Meanwhile, there is speculation that the U.S. is discussing the possible removal of nuclear weapons from Turkey and relocating them to Greece.

Pompeo’s visit was followed by a visit on October 14th by R. Clarke Cooper, the U.S. Assistant Secretary of State for political and military affairs, who met with senior Greek military and political officials before going on to the U.S. naval base at Souda.

An Iraq War combat veteran who previously worked as an advisor to ambassador Zalmay Khalilzad in the U.S. embassy in Baghdad, Cooper subsequently traveled to Bulgaria, where the U.S. recently “donated” two F-16 fighters for free, as part of expanded efforts to encircle Russia militarily. Russia and Bulgaria have historically enjoyed very close diplomatic relations. However, the U.S. is taking advantage of developing strains when the Bulgarian Ministry of Foreign Affairs criticized a World War II exhibition titled the “Liberation of Bulgaria” at the Russian Cultural Center in Sofia; he then published a statement saying that the Red Army brought “half a century of repressions to Central and Eastern Europe” by “Soviet bayonets.”

From Bulgaria, Cooper went on to Poland, to solidify the U.S. military alliance there, and to Cyprus in order to promote cooperation in the training of the Cypriot Armed Forces by the U.S. It should be noted that the Trump administration recently decided to include the Republic of Cyprus in the International Military Training and Training Program (IMET) and to proceed with the partial lifting of the embargo on the sale of American weapons.

Overall, we see a very clear imperial strategy in which the U.S. is turning away from Western Europe towards the Mediterranean and East as the new Cold War takes shape, while trying to resurrect the Intermarium—a geopolitical concept originating in the post-World War I era that envisages an alliance of countries reaching from the Baltic Sea over the Black Sea to the Aegean Sea that would serve as an alternative power bloc between Germany and Russia.

The Greeks are just one pawn in a larger geopolitical chess match—a potentially deadly game which likely won’t end very well for almost everyone involved.

Andrew Lee is an independent researcher and historian who studies the far-right parties in Greece and the wider region of the Balkans.

[1] 84 F-16 fighter planes will be upgraded to the F-16V latest version in a $1.5 billion dollars contract. There are requests from Greece for the acquisition of 24 F-35 5th generation fighters in the future.