The U.S. Peace Council expresses its solidarity with the people of Belarus whose country is undergoing a campaign of destabilization and interference in their internal affairs by outside forces. USPC calls on all parties to respect the sovereignty and territorial integrity of that country.

Belarus, a former constituent republic of the USSR, first declared its sovereignty in 1990 with the dissolution of the Soviet Union. Under its new President Alexander Lukashenko, first elected in 1994, Belarus rejected the Western-imposed “economic shock therapy” that looted the public wealth of many of the other former Soviet republics. Belarus retained state-run industry and agriculture, the social safety net, and the relative equality of the socialist period.

In 2000, Belarus and Russia established the Union State, a supranational confederation for economic integration and common defense. Russia’s missile defense system in Belarus is a critical deterrent against a NATO nuclear first strike. 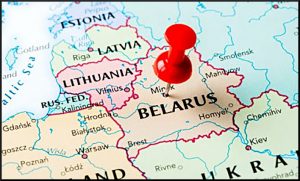 In 2004, the US passed the Belarus Democracy Act overtly funding anti-government NGOs in Belarus and prohibiting loans. In that year, Lithuania, Latvia, and Estonia joined NATO; now post-coup Ukraine is likely on the way. The addition of Belarus to NATO would complete the US foreign policy goal of military occupation of Russia’s entire western border. The National Endowment for Democracy, the quasi-governmental US agency which does legally what the CIA does extra-legally, currently lists projects to bring “democracy” to Belarus.

The presidential election on August 9, 2020 has been seized as an opportunity by leading imperialist powers allied with a cultivated domestic opposition in Belarus to foment a “color revolution.” A coalition of opposition parties, supported by the USAID, calls for a total reorientation of the Belarusian state and society from east to west and the establishment of a neoliberal political economy. Western capitals, including Washington and Brussels, have refused to recognize the results of the election.

Lukashenko officially won with approximately 80% of the vote, amid accusations by the opposition of vote tampering and suppression of opposition candidates, along with authoritarian practices, mismanagement, and corruption. Sergei Lebedev, the head of the Commonwealth of Independent States election observation mission, reports that the “legitimate … election was conducted in compliance with the Constitution and the Electoral Code of Belarus.”

The leading opposition candidate, Svetlana Tsikhanouskaya, received around 10% of the official vote. She claims she had won the election and is ready to lead Belarus. After the election, Tsikhanouskaya left Belarus for Lithuania, where she met with U.S. First Deputy Secretary of State Stephen Biegun.

The Western media have reported massive demonstrations against the government, but have ignored pro-government demonstrations. While predominately peaceful, incidences of violence by demonstrators and security forces have been documented. Unlike the Maidan color revolution in Ukraine, heavily armed pro-fascist elements have not been present in Belarus, although the opposition has adopted the red and white flag used during the Nazi occupation of Belarus. The opposition draws heavily from the professional class, while industrial workers have been less involved.

The situation in Belarus remains tense, but due to the government rallying support in the streets, the opposition has changed its demands from calling for regime change to now asking President Macron of France to mediate a process leading to the resignation of President Lukashenko. Russian foreign minister Sergei Lavrov remarked: “They are trying to redraw Belarus according to their own design and offer their mediation.…” It is clear that foreign forces are trying to sow division and violence in Belarus and hope for the ouster of President Lukashenko.

The U.S. Peace Council calls on the government of the United States and other foreign powers to cease from meddling in Belarus and to follow the principle of international law of non-interference in the internal affairs of other states. We express our solidarity with the people of Belarus in this trying time and are confident that they can resolve their differences peacefully free from foreign interference.