In researching this article, a cool-sounding word came up: “pettifoggery.”

It means “given to quibbling over trifles.”

The word was used in an article by Barton Gellman in the November Atlantic magazine, “The Election That Could Break America.”

Gellman’s point is that it is a waste of time to quibble over whether the 45th president of the United States will leave office on Inauguration Day – Jan. 20, 2021. He makes an exceptionally sound case that, no matter what happens on Election Day – Nov. 3, 2020 – Donald Trump will not concede his position.

Gellman writes that “two men could show up on the 20th to be sworn in. One of them would arrive with all the tools and power of the presidency already in hand.”

No one has a crystal ball, but let’s face it, Gellman is probably right.

Donald Trump’s hubris as well as his pathology absolutely will not allow him to leave easily or quietly. Every tweet, statement, decree – every action of Trump since the 2016 election – has demonstrated his fierce hunger for staying in power, in the limelight and reaping the bounty for him and his family that comes with the presidency.

According to Gellman, Joe Biden and others have “misconceived the nature of the threat.” They say that if Trump refuses to leave the Oval Office, “the proper authorities will escort him from the White House with great dispatch.” Gellman argues that this hope is not enough.

Gellman’s piece covers all kinds of articles that have been written, studies carried out and even conferences held among legal and social scholars about the 2020 election. Constitutional scholars especially have examined multiple scenarios that could play out between Nov. 3 and Jan. 20 – a period Gelman calls “the Interregnum.”

That is the term for a period, especially between successive reigns or regimes, when normal government is suspended.

Gellman argues that even if there is seemingly a landslide vote on election night, the tabulation of mail-in votes, etc., could mean the final outcome is not determined for “days or weeks.”

The transfer of power in January has not received this much attention in generations. Even the U.S. military has weighed in.

On Sept. 25, in an article headlined “At Pentagon, fears grow that Trump will pull military into election unrest,” the New York Times reported:

“Defense Department officials said top generals could resign if Mr. Trump orders the active duty military into the streets to quell protests.”  In remarks released last month, one general said, “I believe deeply in the principle of an apolitical U.S. military.”

Trump might not need to worry about armed support, however. He may not have enough to carry out a military coup – but his relationship with the police of this country is solid. 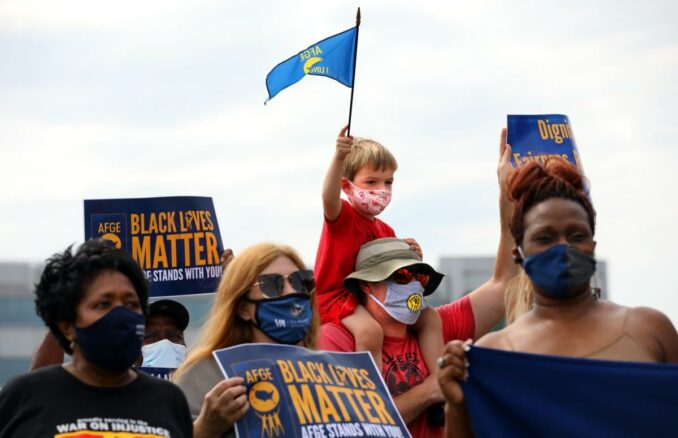 Trump has threatened on more than one occasion to mobilize “law enforcement” to poll watch on Election Day – an ominous threat, especially for Black and Brown people. Imagine the same agency that murders Black folks with impunity watching over their shoulder as they vote in Georgia or elsewhere.

In addition, the Republicans, according to Gellman, are “recruiting 50,000 volunteers in 15 contested states to monitor polling places.”

Think of that. The Republican Party watching over polls. This is the same party that in 2009 produced the Tea Party, the group of ultra-conservative zealots who eventually came in from the fringe to become what the Aug. 13 New York Times called an “enduring force” in U.S. conservatism.

This is the same party, the Times noted, that is determined to consolidate and cater to an “older, whiter, more male, more rural, more conservative” base.

The role of revolutionaries and socialists

So, what do revolutionaries and socialists do – those who as Marxists understand that both parties represent the capitalist class, that the obscene donations from PACS and billionaires outweigh the influence of labor or any working-class interest group in a bourgeois election?

If the Democrats really were for the working class, they would overturn anti-union legislation. They would support union drives and the call for a general strike against racism, as some bold labor activists have already done.

They would move heaven and earth to make the oil companies pay for climate change. They would socialize healthcare. If Canada can do it, why not the U.S.?

They could call for a strike in Congress and in the streets to demand COVID relief. They could demand that the police who killed George Floyd, Breonna Taylor and so many other victims pay for their crimes.

If they truly represented the interests of the people, the Democrats in Congress would shut down Washington until the police were punished or COVID money released.

But they do not. And they will not.

If Wall Street controls the elections, Congress and the White House, what can those who live on Martin Luther King Street, Cesar Chavez or Main Street possibly do to influence the elections?

‘The transfer of power to the people’

Whatever happens in November, whoever wins the election, workers and oppressed people must organize and fight back. If ever there was a time for a movement for Worker Assemblies, this is it.

CNN and Fox News may have all the cameras aimed at the White House in November, but if the pitchforked masses are in the streets striking for what we need, all those cameras will turn toward the people.

To those scholars concerned about the defense of the Constitution during the Interregnum, we must ask where was the concern for the Constitution when George Floyd or Breonna Taylor lay dead?

What about the constitutional, human and civil rights of the migrant women who have been forcibly sterilized?

And what about all the essential workers who cannot work from home, those forced to risk exposure to COVID because neither the capitalist system nor the two capitalist parties represent them?

And all the hungry, houseless, incarcerated, impoverished masses—who is fighting for their constitutional rights?

Clearly, only the people can fight for themselves. That is the lesson of November.