“Military expansionism compensates for the fact that the U.S. has lost to China in the realm of economic competition.”

The COVID-19 pandemic has not made the planet any safer from the threat of U.S. militarism. Nothing encapsulates the inhumanity of the U.S. social order more than the loss of tens of millions of jobs and nearly 200,000 lives occurring alongside the expansion of U.S. aggression around the world. For seven months, the majority of the planet has been busy engaging in high level cooperation to contain the pandemic. The U.S. has done the exact opposite, focusing instead on scapegoating China to deflect attention away from its own shortcomings. But the U.S.’ scapegoating of China has not been confined to a war of words. Direct military aggression toward China is part and parcel of the larger disease of American hegemony.

American hegemony syndrome is a plague on planetary existence that attacks its host most violently through U.S. military aggression. With American economic supremacy on the decline, U.S. military strategists have named the rising economies of Russia and China as the principle threats to the “national security” of the United States. The National Security Strategy of the United States military released in 2017 declared that an era of “Great Power Competition”  had begun and that military resources should shift accordingly. On July 3rd 2020, the United States sent two aircraft carriers  to the South China Sea for large scale operations at the same time that China was performing its own drills in the region. The U.S. spent the anniversary of its settler colonial foundations by treating the second largest economy in the world as a nemesis to be conquered rather than a potential ally in the fight against COVID-19 and the myriad of problems facing the planet.

“U.S. military strategists have named the rising economies of Russia and China as the principle threats to the ‘national “security.’”

U.S. militarism in the South China Sea and the Asia Pacific did not begin in 2017 or 2020. Over the last decade, the U.S. has moved much of its military hardware onto China’s doorstep. A recently published Global Times report  outlined the scope of the U.S.’ military presence in the Asia-Pacific:

“The US has 375,000 enlisted members of its Indo-Pacific Command, including 60 percent of its Navy ships, 55 percent of its Army, and two-thirds of its Marine Corps. In addition, with 85,000 forward-deployed soldiers and a large amount of high-tech and new weaponry, the US military has maintained its absolute supremacy in the Asia-Pacific over the years, while also [continuing to seek] new deployments, budgets, and resources using China’s and Russia’s military development as excuses.”

In practice, U.S. militarism in the Asia-Pacific is better described as a policy of encirclement. A strong emphasis has been placed on the fortification of the U.S.’ military relationships with allied nations surrounding China. In Japan, for example, the U.S. possesses more than 100 military facilities and 50,000 military personnel . In 2014, the U.S. signed a ten-year Enhanced Defense Cooperation Agreement  with the Philippines that allows its military to use the country as an operational outpost. South Korea, Guam, Australia, Malaysia, and a host of other countries have strengthened military arrangements with the United States over the last decade. The resultant expansion of basing arrangements in the Asia Pacific is outlined by the U.S. Department of Defense in its Base Structure Report  for the fiscal year of 2018. 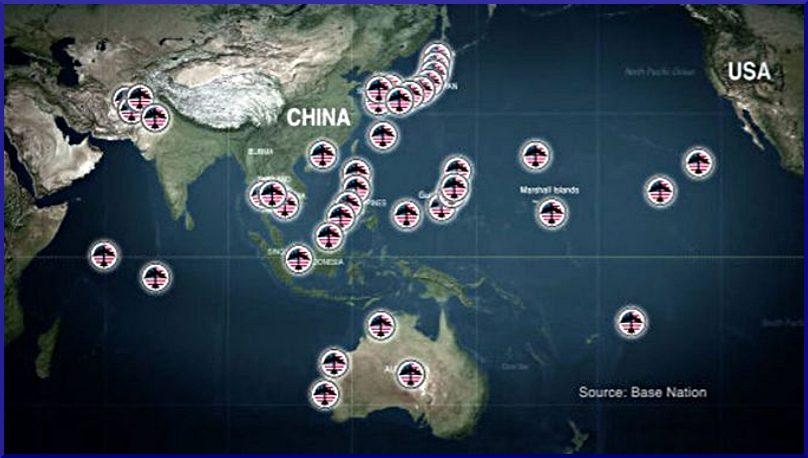 “The U.S. has moved much of its military hardware onto China’s doorstep.”

U.S. militarism directed against China is too often separated from the full scope of American hegemony syndrome abroad. The expansion of the U.S. African Command (AFRICOM), for example, possesses the same goal as the Indo-Pacific Command of maintaining American hegemony in a period of fledging crisis. According to the Black Alliance for Peace (BAP),  AFRICOM has expanded operations into 53 of 54 African countries in a little more than a decade. Roughly six thousand U.S. military personnel  are scattered across the African continent and U.S. Special Forces are active in twenty-two African countries . Africa has thus become a key aspect of U.S. military police worldwide.

However, few in the United States have made the connection between the expansion of AFRICOM and the growing U.S. military presence in the Asian-Pacific. Yet this connection is readily made in AFRICOM’s own security documents. The most recent Posture Statement  provided to the Senate Armed Services Committee by AFRICOM’s Commander Gen. Stephen Townsend in January of 2020 mentions China a total of nineteen times. According to Townsend:

“[the]U.S. Africa Command engages partners to establish the security environment required for economic opportunity and trade to flourish. With a whole-of-government approach, enhanced security fosters development and investment with U.S. initiatives such as the Millennium Challenge Corporation, Prosper Africa, and the Better Utilization of Investments Leading to Development (BUILD) Act. Efforts like these open doors for U.S. companies to compete overseas and respond to China’s increased economic engagement in Africa”(emphasis my own).

“AFRICOM has expanded operations into 53 of 54 African countries in a little more than a decade.”

AFRICOM does not exist for the benefit of the African people or anyone else for that matter. It exists primarily as an offensive measure to curb China’s economic ties to the African continent. Military expansionism compensates for the fact that the U.S. has lost to China in the realm of economic competition. China’s trade with Africa amounts to more than $200 billion  compared to the U.S.’ meagre $39 billion . General Townsend claims that AFRICOM’s principle mission is to bring prosperity to Africa by curbing “Violent Extremist Organizations,” or VOEs, yet these same organizations have grown exponentially  in Africa and elsewhere since AFRICOM has expanded its footprint on the continent in the aftermath of the U.S.-led overthrow of the Libyan government in 2011.

American hegemony syndrome knows no borders and has threatened the self-determination of China, Africa, and the rest of the world with a sizeable escalation of military aggression. The more U.S. militarism grows worldwide, the more dangerous the world becomes for humanity. “Great Power competition” is not merely a strategy, it is a roadmap to a possible nuclear arms race and the potential for larger and more deadly military conflicts in the years to come. This is just one of many reasons to oppose U.S. militarism. Another important reason is that U.S. militarism is already causing major casualties right now, both to the people and the planet.

“AFRICOM is an offensive measure to curb China’s economic ties to the African continent.”

U.S. bases, sanctions, and military operations kill tens of thousands of people per year both directly and indirectly. The U.S.-led effort to overthrow the Libyan and Syrian governments in 2011 led to the death of hundreds of thousands of people and facilitated a refugee crisis that has displaced millions across Northern Africa and the Middle East . U.S. sanctions against Venezuela  and Iran  have killed tens of thousands of people in less than half a decade due to shortages in much-needed raw materials for medical intervention. U.S. bases and operations are the biggest environmental polluters on earth . U.S. militarism is also costly for workers and oppressed people living in the U.S. mainland. Funding for the U.S. military has increased by 100 billion USD since Trump entered the White House at the expense of social spending for housing, living-wage employment, infrastructure development, and healthcare.

Put simply, while American hegemony syndrome comfortably cushions the profits of Lockheed Martin and the political careers of people like Mike Pompeo, it does not serve the broad interests of humanity. Climate change, poverty, racism and the host of problems facing humanity cannot possibly be addressed in the absence of a world order that respects the right of self-determination for all nations. Thus, COVID-19 is not the only pandemic that presents the dire need for an antidote. American hegemony syndrome has shifted public attention away from the critical problems facing humanity by demonizing China. U.S.-based peace organizations, activists, scholars, and all peace-loving people must denounce U.S. militarism and embrace cooperation and solidarity. A good place to start is by signing the No Cold War statement  and becoming a member or supporter of the Black Alliance for Peace.

Danny Haiphong is an activist and journalist in the New York City area. He and Roberto Sirvent are co-authors of the book entitled American Exceptionalism and American Innocence: A People’s History of Fake News–From the Revolutionary War to the War on Terror (Skyhorse Publishing).  He is the co-host with BAR Editor Margaret Kimberly of the YouTube show BAR Presents: The Left Lens and can be reached at  and Twitter @spiritofho.