Aug. 10 — An earthquake-size explosion in the port of Beirut on Aug. 4 killed 200, wounded 6,000 and left 300,000 people homeless in that densely populated city. It also unleashed a political tsunami that pulled in regional and imperialist powers as well as Lebanese political forces.

The first indications were that the explosion occurred when a massive amount of ammonium nitrate, stored at the port since 2014, ignited and destroyed much of the city. The explosion also destroyed a nearby grain silo holding much of the country’s food.

Demonstrators in Beirut blamed the government for overall corruption and negligence regarding the explosion and clashed with the army. This year the Lebanese people have faced economic collapse, the pandemic and now the explosion.

Because Lebanon is the mass base of the liberation organization Hezbollah, the first reaction of U.S. and other imperialist powers and their reactionary Lebanese clients was to blame Hezbollah for the explosion — without any evidence.

Hezbollah, which participates in the current Lebanese coalition government but has no authority in the Beirut port, immediately denied any role or responsibility in the explosion and then went about organizing relief for the population. Hezbollah made no immediate charges of responsibility, but called for an investigation, as did the Lebanese Communist Party. 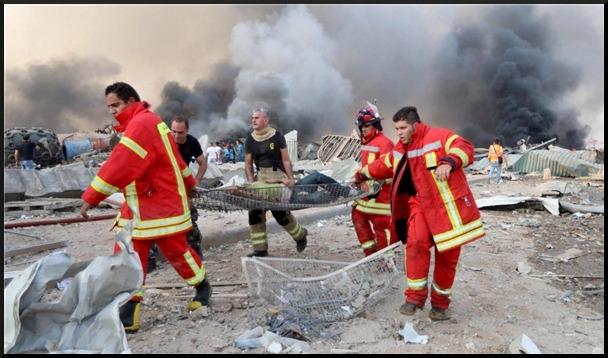 Over 2 million people, about a third of Lebanon’s 6 million inhabitants, dwell in or around Beirut. As of 2018, about 1.5 million Syrian and a half-million Palestinian refugees were living in Lebanon, which explains why Syrians made up about a quarter of those killed by the explosion.

Representing the European Union, French President Emmanuel Macron toured Beirut Aug. 9, acting like a politician running for office. Ever since feudal France sent troops to participate in the Crusades, the French ruling class has intervened in the region around Lebanon. France was the controlling imperialist power in Lebanon and Syria before World War II.

Even now, while offering emergency aid that is desperately needed, Macron pressed for EU tutelage of Lebanon’s economy. Macron demanded “reforms” and said the aid  — collected through an international consortium that raised a quarter-billion dollars ($250,000,000) from imperialist countries and Gulf emirates — should be distributed through nongovernmental agencies. All imperialist aid has strings attached.

The U.S., which pledged only $15 million to the emergency aid package, has sanctions against Lebanon. Washington attacks Lebanon because Hezbollah’s role in the Lebanese government aids the liberation organization’s ability to defend the region against imperialism and against Israeli expansion. Iran has already called upon the U.S. to lift its sanctions on embattled Lebanon.

Both Macron and Trump issued statements calling on the Lebanese government to make concessions to the demonstrations. This itself raises questions about the direction of these protests, whatever the legitimate complaints of the people.

Remember that Macron used clubs, rubber-coated bullets and tear gas against the Yellow Vest protests for a full year in 2019, and Trump recently sent federal agents in camouflage against Black Lives Matter protesters in Portland, Ore. If the big criminals Macron and Trump take the side of Lebanese protesters, something is wrong. U.S. imperialism, in particular, has no legitimate role to play in the region.

Hezbollah leader Nasrallah on the crisis

The leader of Hezbollah, Hassan Nasrallah, adjusted a speech he was scheduled to give Aug. 7 on current developments so he could speak exclusively to the crisis caused by the explosion. He said since Hezbollah was being attacked by politicians and media who he knew were lying, he wanted to remove any doubts about Hezbollah’s role.

“I confirm in a firm, categorical, absolute, final, total and definite way that Hezbollah has absolutely nothing in the port. There is no weapons warehouse, no missile stock, not a single rocket, a single rifle, a single grenade, a single bullet, (a single drop) of nitrate, there is nothing of all this, neither in a hangar nor outside a hangar, neither now nor in the past, there is nothing and there never has been anything.”

Nasrallah brought up that the international media have already stopped blaming Hezbollah because they know it strains their credibility — everyone knows that Hezbollah has no responsibility for the port of Beirut.

He called for solidarity:

“The priority is compassion, cooperation and mutual aid, to overcome these days of pain, suffering and humanitarian crisis.”

Not that Nasrallah would excuse the guilty:

“I call on State officials, at all levels and in all authorities, to show the utmost seriousness and determination, whether to complete the investigation or to judge and blame, and chastise all those responsible for this tragedy.”

And finally, the Hezbollah leader told his people that despite this tragedy, that the Hezbollah-led resistance

“by its strength, its place in the country and in the region, is too large, too strong and too noble for it to be tainted by the slanders of certain oppressors, liars and falsifiers of the truth, who incite sectarian rivalry, and who encourage civil war. They have always worked at this and have always failed, and they will fail again.”

John Catalinotto was born in New York, USA, where he teaches mathematics at City University. He was a civilian organizer for the anti-war, anti-racist American Servicemen’s Union during the U.S. war in Vietnam, since 1982 managing editor of Workers World weekly newspaper, key organizer for the International Action Center of the Tribunal on Yugoslavia (June 2000) and Tribunal on Iraq (August 2004). Collaborator with Avante and odiario.info (Portugal) and Terra e Tempo (Galicia). Edited two books, Metal of Dishonor about depleted uranium (1997) and Hidden Agenda: the U.S.-NATO Takeover of Yugoslavia (2002). Member of Tlaxcala.