Today, in 66 countries around the world, May Day — International Workers’ Day — is an official paid holiday commemorated on May 1. But not in the United States.

While May Day originated here, the ruling class has done everything it can to eradicate any memory of this working-class holiday. As a result, International Workers’ Day is officially ignored in the country where it was born.

However, it is commemorated around the world as an important anniversary for the working-class movement. Socialists and communists struggled the hardest to have it made an official holiday in many countries

What are the origins of May Day, and why is it important to workers in this country?

The roots of May Day as a time to honor the struggles of the working class began on May 1, 1886. Some 300,000 workers across the United States walked off their jobs demanding an eight-hour day. In that era, a “normal” workday could be 10 or even 12 hours long, with no overtime pay

Within days of these walkouts, police killed several workers on strike at the McCormick Reaper Works in Chicago. That led to a huge protest rally in Haymarket Square on May 4

In the middle of the rally, a bomb was thrown into the crowd, killing several workers and police. Police then broke up the rally and arrested many of the workers

It was clearly a frameup. Why would these workers bomb their own rally? One of those arrested for the bombing and later hung, August Spies, was a rally speaker who was actually sitting on the platform at the time the bomb was thrown.

Nevertheless, eight workers were convicted of the crime and five sentenced to death: August Spies, George Engel, Adolph Fisher, Albert Parsons and Louis Lingg. Four were hanged on Nov. 11, 1887; Lingg died in jail the night before. Mass pressure finally won the exoneration of the other three 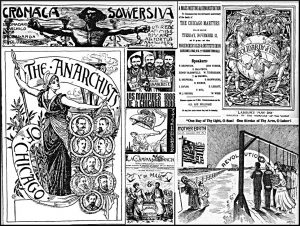 These arrests and executions took place during a time of heavy repression against immigrants. Four of the five sentenced to death had come from Germany. Politically, the eight were anarchists.

This terrible injustice perpetrated against the rising labor movement in the U.S. led activists at a meeting in 1889, when there were widespread socialist movements around the world, to designate May 1 as International Workers’ Day

That outraged the ruling class in this country. So in place of May Day, the U.S. government in 1894 set up Labor Day as a holiday in September. While people of course enjoy getting this paid day off, Labor Day has none of the history of working-class struggle that is incorporated in May Day.

May Day was reignited in the U.S. 120 years later in 2006, when millions of immigrants, the vast majority from Latin America, carried out a countrywide general strike. They were protesting the racist, anti-immigrant Sensenbrenner bill that intensified anti-immigrant repression, including the expulsion of between 2 and 3 million immigrants during the subsequent Barack Obama administration

Of course, no holiday can make up for the crimes committed against workers every day of the year. Now, in the midst of the coronavirus epidemic, when so many millions are unable to work as the economy shuts down, it is imperative to demand that every person receive financial support from the government, along with health care, food, housing and more, sufficient to meet their needs

We can’t gather in huge demonstrations to broadcast these demands. But we can, for example, use every modern tool of communication to demand that Immigration and Customs Enforcement and migrant detention centers be shut down now – and stay closed beyond the pandemic.

Activists in many cities are protesting from their cars around a range of key working-class issues, including health and safety in the context of COVID-19. Others are holding “virtual” protests. Solidarity with prisoners and migrants, among the most oppressed and exploited sectors of the working class, is a strong theme.

Show your solidarity for workers’ struggles on International Workers’ Day. Join a caravan or action near you or virtually join with others to plan for working-class struggle.

Visit peoplespowerassemblies.org to find an action near you. To register for Workers World Party’s Workers Assembly webinar.