While the $2.2 trillion coronavirus stimulus bill was authored in the spirit of beating back a pandemic, buried deep within its text is a stipend for the US State Department operations dedicated to carrying out foreign interventions that have contributed to the outbreak of preventable diseases like polio in Syria and Pakistan.

Passed unanimously by Congress this March, the Coronavirus Aid, Relief, and Economic Security (CARES) Act provides $250 million for the State Department to implement “economic, security, and stabilization” activities through an “Economic Support Fund” (ESF). Earmarked for activities through September 2020, the bill authorizes the State Department to fund “international organizations.”

While the bill does not specify which organizations qualify for funding, many recent State Department “security and stabilization” operations have relied heavily on foreign proxies which did exactly the opposite of improving public health systems. This was particularly true in Syria, where the US embarked on a multi-billion-dollar regime-change operation that actively destabilized large swaths of the country, resulting in the resurgence of polio just 15 years after the Syrian government had eradicated it.

The disease likely returned to the country thanks to the infiltration of jihadist fighters from Pakistan, where the CIA had destroyed confidence in anti-polio efforts by launching a fake vaccination drive that doubled as a spying campaign in its hunt for Osama bin Laden.

At the center of the destructive interventions in Syria and Pakistan was the US Agency for International Development (USAID), a State Department subsidiary that functions as the humanitarian arm of American empire.

In Syria, USAID attempted to construct a parallel government in regions controlled by foreign-backed, anti-government militants, helping to consolidate extremist control while doing nothing to stop the resurgence of preventable diseases. Earlier in Pakistan, the supposed aid agency not only partnered with the CIA to organize the sham vaccination drive, it recruited the doctor who oversaw it.

This sordid history should raise serious questions about the massive Emergency Support Fund allocated to the State Department and USAID under the guise of fighting coronavirus. Not only is the ESF classified by the Congressional Research Service as a “non-health development assistance account,” its recipients have contributed to the delegitimization of public health systems and the spread of disease in countries already plagued by US intervention.

The Syrian government achieved a public health milestone in 1999 when it fully eradicated polio through a nationwide vaccination drive. Fifteen years later, however, the World Health Organization had declared a public health emergency as polio returned and threatened to spread to neighboring countries.

Why had an entirely preventable disease been able to creep back into Syrian communities? The answer was simple: the country had been destabilized by a proxy war fueled by the US and its allies, placing entire regions under the control of extremist militias that severed those under their control from the public healthcare system.

Operation Timber Sycamore, a semi-covert operation to topple the Syrian government, officially began in 2012. Through this multi-billion-dollar arm-and-equip operation, the CIA sent weapons over the Turkish border and placed them in the hands of fanatical Islamist fighters marketed to the American public as “moderate rebels.” Within months, large sections of the country were overrun by extremist militias, which proceeded to destroy infrastructure and place previously functional public services under their theocratic rule.

In areas that were captured by anti-government militants, USAID enacted a $340 million program to establish a parallel government it dreamed would eventually replace the one in Damascus, which the US aimed to topple. To do so, it dumped funding into supposed “civil society” groups such as the White Helmets, and opposition media outfits like Radio Fresh. Meanwhile, a British firm called Adam Smith International received a contract to help establish a “Free Syrian Police” force capable of imposing law and order.

Behind the scenes, while the White Helmets reaped Nobel Prize nominations and relentless corporate media promotion, the group became a de facto MASH unit for jihadist militias, participating in public executions and other atrocities carried out by the armed Islamists it accompanied.

Radio Fresh was forced to broadcast Arabic lyrics over farm animal sounds to skirt theocratic rules forbidding the playing of music. Its US-funded founder, Raed Fares, was assassinated in 2018 by members of al-Qaeda’s local affiliate.

For its part, the “Free Syrian Police” was quickly infiltrated by extremist militias, helping them consolidate control over the Idlib province of Syria, which the Syrian government is still fighting to liberate.

In perhaps its only evaluation report on its activities in Syria, USAID’s inspector general conceded it had no idea what was taking place in supposedly “liberated” territory: “The extent to which [the Office of Transition Initiative’s] efforts were successfully building inclusive and accountable governance structures was still unclear,” the report concluded.

USAID’s inspector general added that “the ongoing conflict resulted in challenges that have led to delays in development and implementation of these activities.” (The coronavirus bailout provides the inspector general with an additional $1 million to monitor USAID activities supported by the new Emergency Support Fund.)

As insurgent-occupied areas of Syria degenerated into dystopian Wahhabi fiefdoms, foreign fighters slipped in by the tens of thousand. Some of them hailed from a country that had just seen its own polio outbreak thanks to a cynical US intelligence operation that involved USAID.

And almost as soon as polio struck Syria, a celebrity public health expert with ties to the US State Department began working with the Syrian opposition to weaponize the outbreak in the service of regime change.

Beginning in 2014, Dr. Annie Sparrow waged a crusade to blame the Syrian government for the outbreak of polio and accuse the World Health Organization (WHO) of supposedly downplaying its severity. “It missed the outbreak for many, many months and has not been able to demonstrate that it has vaccinated kids effectively,” Sparrow said of the WHO in 2014.

In an 2017 incendiary op-ed for the Qatari-backed Middle East Eye, Sparrow launched a Trumpian assault on the WHO, branding it as an “an apologist for Assad atrocities” that was “complicit in war crimes.” Whitewashing the presence of foreign-backed extremists in the country, she referred to the regions they controlled merely as “government-shunned areas.” 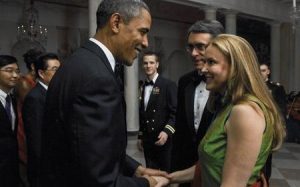 Sparrow was not just any public health professional with an objective concern for Syrian civilians. She was, in fact, the wife of Ken Roth, the regime change-obsessed director of Human Rights Watch (HRW), which functions as a revolving door between the NGO sector and Democratic Party-run State Departments. (Sparrow, an Australian doctor, was a former HRW researcher.)

According to a glowing 2015 profile of Sparrow in Vogue, she was not exactly a neutral party to the Syrian conflict either: “Sparrow has been working closely with the Assistance Coordination Unit—the humanitarian arm of Syria’s opposition coalition,” the magazine noted.

According to the Assistance Coordination Unit’s website, its activities were bankrolled by a $17.5 million grant from the government of Saudi Arabia, which had also established a brutal militia called Jaish al-Islam (the Army of Islam) to wreak havoc just outside Damascus. 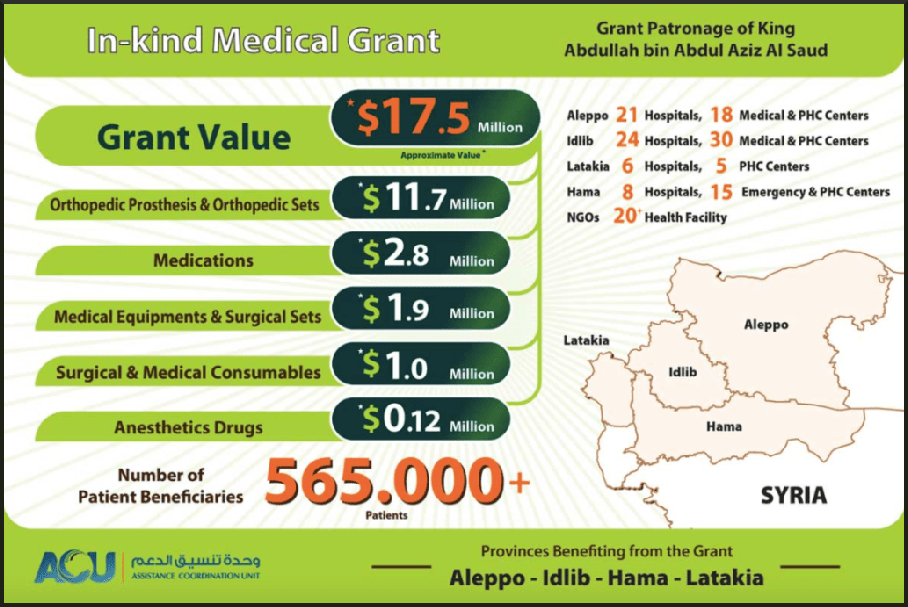 So while she portrayed herself as a public health hero, Sparrow was “working closely” with an apparent front for one of the world’s worst human rights violators to slander the World Health Organization and destabilize a country to the point that it could no longer control preventable diseases.

Contrary to Annie Sparrow’s partisan screeds, the most likely cause for the spread of polio to militia-held bastions of Syria was the infiltration of foreign jihadists. According to an analysis by Jennifer Cole of the Royal United Services Institute, genetic sequencing linked a polio outbreak in northeastern Syria “to one of Pakistani origin…” At the time, 92 percent of the world’s polio cases occurred in Pakistan.

“Efforts to eradicate the disease in Pakistan, Afghanistan and Nigeria – the only three countries where the disease remains endemic, with ‘wild’ or naturally occurring strains still circulating – have long been challenged by Islamist militants who claim that the vaccinations are a Western plot to make their children infertile, to spread AIDS, or that health workers are undercover Western spies,” Cole explained.

The fear among Pakistani jihadists that Western vaccination drives served as a cover for spying was firmly grounded in reality. In 2010, the CIA staged a fake vaccination campaign against Hepatitis B near a villa outside Islamabad that it suspected was the residence of Osama bin Laden. The plan called for herding children from the villa, vaccinating them, and testing the needles for DNA that resembled that of the al-Qaeda leader, thus determining whether he was sheltering inside.

To spearhead the devious operation, the CIA turned to Dr. Shakil Afridi, a Pakistani doctor the agency had recruited through USAID. The vaccination drive was planned in USAID warehouses by Afridi and staff members of Save the Children, a USAID partner NGO that was running cover for the CIA, according to Afridi.

Soon after bin Laden was captured in May 2011, Afridi’s cover was blown by a local journalist, he was jailed, and Save The Children was expelled from the country. As word of the sham vaccination effort got out, jihadists from Pakistan to Nigeria began slaughtering polio vaccination workers in droves. Suddenly, the disease was spreading like wildfire.

“Forevermore, people would say this disease, this crippled child is because the U.S. was so crazy to get Osama bin Laden,”

It was little more than a year after the CIA helped unleash polio on Pakistan that the agency began funneling arms to anti-government militants in Syria through its Operation Timber Sycamore. As parts of the country transformed into havens for the same jihadist fanatics who had been murdering vaccination workers in Pakistan, polio returned and threatened to spread into neighboring states like Turkey and Jordan.

And all along, USAID was blindly dumping resources into these disease-infested regions, helping to consolidate jihadist control under the guise of “stabilization.”

Now, thanks to the coronavirus stimulus package, the same State Department programs that have spread chaos across the Middle East have received a massive shot in the arm.

Max Blumenthal is an award-winning journalist and the author of books including best-selling “Republican Gomorrah,” “Goliath,” “The Fifty One Day War” and “The Management of Savagery,” which will be published in March 2019 by Verso. He has also produced numerous print articles for an array of publications, many video reports and several documentaries including “Killing Gaza” and “Je Ne Suis Pas Charlie.” Blumenthal founded the Grayzone Project in 2015 to shine a journalistic light on America’s state of perpetual war and its dangerous domestic repercussions.