We are pleased to announce that the 2019 US Peace Prize has been awarded to the Honorable Ajamu Baraka, “whose bold antiwar actions, writings, speeches, and leadership provide an inspiring voice against militarism.”

Michael Knox, Chair of the Foundation, presented the award during a forum on September 23 in New York City.  In his remarks Knox said, 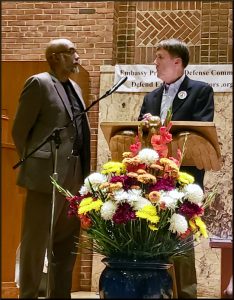 “Thank you, Ajamu, for your outstanding domestic and international activism to end wars and militarism.  We applaud your long and distinguished record of working for social justice, human rights, civil rights, and peace.  Many antiwar organizations have benefited from your innovative leadership and consultation.  You are a force in revitalizing the Black antiwar tradition.  I believe that Black Alliance for Peace could be the most important new antiwar organization established this century.  We want you to know that your efforts are greatly appreciated here and around the world.  Thank you for your service.”

In his acceptance, Ajamu said, 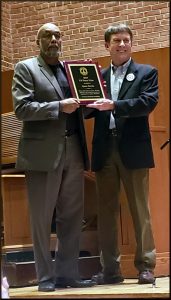 “I want to thank the US Peace Memorial Foundation, Dr. Michael Knox, and the Board of Directors for this great honor and for your faith in me and my work.  I accept this award this evening with great honor and humility.  I accept not as an individual but as a member of a collective of peace and antiwar activists, many of whom are in this room tonight, who paved the way with their sacrifice, courage and unwavering dedication to the idea that we can live in a world without war.  We envision a world where human beings can be free to live liberated from brutality, the madness of state and non-state violence in all forms, from direct military engagements to the war of sanctions.  We believe that there is in fact an alternative to the irrationality that we call “modernity” built on conquest, slavery, economic exploitation and ongoing colonial domination.  So, I accept this on behalf of those visionaries, on behalf of the Black Alliance for Peace, on behalf of all those who are committed to peace but who understand that there can be no peace without justice, and for justice – we have to struggle to achieve it.”

Ajamu Baraka, a Vietnam-era war veteran, is a social justice and human and civil rights activist who was the Green Party’s nominee for Vice President of the United States in 2016.  In 1997, he was one of the 300 human rights defenders from around the world who were honored in commemoration of the 50th anniversary of the United Nations’ signing of the United Declaration of Human Rights in 1948.  In addition to being the national organizer and spokesperson for Black Alliance for Peace, Baraka is also an administrative committee member for the United National Antiwar Coalition and an executive board member of the U.S. Peace Council.  For years he has been a force in revitalizing the Black antiwar tradition, an influence on domestic and international education, and an outspoken advocate against the U.S. foreign policy of “humanitarian” intervention and U.S. military presence in other countries.  His numerous contributions include giving speeches and interviews, writing articles, providing consultation and leadership, and taking part in delegations and panels.

In addition to receiving the US Peace Prize, our highest honor, Mr. Baraka has been designated a Founding Member of the US Peace Memorial Foundation.  He joins previous US Peace Prize recipients David Swanson, Ann Wright, Veterans For Peace, Kathy Kelly, CODEPINK Women for Peace, Chelsea Manning, Medea Benjamin, Noam Chomsky, Dennis Kucinich, and Cindy Sheehan.  Nominees considered by the Board in 2019 included Erica Chenoweth, Stephen D. Clemens, Thomas C. Fox, Bruce K. Gagnon, Jewish Voice for Peace, National Network Opposing the Militarization of Youth, Sally-Alice Thompson, Women’s March on the Pentagon and World BEYOND War.  You can read about the antiwar/peace activities of the recipients and all nominees in our publication, the US Peace Registry.

The US Peace Memorial Foundation directs a nationwide effort to honor Americans who stand for peace by publishing the US Peace Registry, awarding an annual US Peace Prize, and planning for the US Peace Memorial in Washington, DC.  These projects help move the United States toward a culture of peace by honoring thoughtful and courageous Americans and U.S. organizations that have taken a public stand against one or more U.S. wars or who have devoted their time, energy, and other resources to finding peaceful solutions to international conflicts.  We celebrate these role models to inspire other Americans to speak out against war and to work for peace.

Please help us continue this important work.  Join the list of individuals, organizations, and US Peace Prize recipients who are Founding Members, and have your name permanently associated with peace.  Founding Members are listed on our website, in our publication the US Peace Registry, and eventually at the US Peace Memorial.

Thank you very much for your support.

Lucy, Medea, Jolyon, and Michael
Board of Directors