by Kathy Kelly, published on Voices for Creative Nonviolence, July 12, 2019

Intense fighting and hideous attacks battered Afghans throughout their country last week as negotiators in Qatar weighed the benefits and costs of  a peace agreement that might stop the bloodshed.

In Kabul at least 40 people, including one child, were killed in a complex Taliban attack. Dozens of children whose school was partially collapsed by a massive car bomb were injured. Of these, 21 were hospitalized with serious injuries.

New York Times correspondent Mujib Mashal posted (on Twitter) a photo of an elementary school child being carried into the Italian Emergency Surgical Center for Victims of War in Kabul. “Blood on his face,” Mashal writes, describing the child. “Still in shock. Still clutching that pencil.”

The same attack damaged a television station, a government facility and an adjoining private war museum.

Operated by OMAR, (Organization for Mine Clearance and Afghan Rehabilitation), a group dedicated to the never-ending and often dangerous work of mine-clearance and disposal, the war museum houses ordnance and land mines used in Afghanistan during four decades of warfare. In 2012, young Afghan Peace Volunteers took me to see the museum. I recall a small exhibit showing remnants of a United States cluster bomb. The remnants are called bomblets, and each cluster bomb consists of 202 bomblets. They resemble children’s playthings, items that could be stepped on, driven over or picked up by curious children. The U.S. dropped 1,228 cluster bombs in Afghanistan between October 2001 and March 2002 alone. The Afghan landscape is now littered by anti-personnel and anti-tank mines which OMAR is striving to remove, where permitted, before more Afghan civilians are killed. Research by the Mine Action Program of Afghanistan indicates, in the first three months of the current year, 130 Afghan boys and girls were casualties of “ERW:” “Explosive Remnants of War”.

The Taliban, U.S. Government, and every other warring party in Afghanistan must be asked:

“How many more civilians, including children, are you willing to kill and maim?”

The second time I visited the OMAR museum was with my friend Martha Hennessy. We were asked not to take photos, but Martha had already snapped a picture of a carpet carefully woven to illustrate several types of land mines Afghans should watch out for. The carpet was hung on a wall, but actual mines lie in the paths to be traversed by innocent Afghans. On the phone with me discussing the recent Kabul attack, Martha mentioned that carpet and reflected on the terrible carpeting of Afghanistan with barbarous ordnance.

Martha now faces up to 20 years in prison for protesting the most barbarous and inhumane weaponry ever invented.

Martha, a granddaughter of the Catholic Worker Movement’s founder Dorothy Day, is one of seven Catholic activists, the “King’s Bay Plowshares Seven“, whose April 4, 2018 action was in accord with their deeply held beliefs that life is sacred, and must not be taken in war. The U.S. naval base at King’s Bay, Georgia houses nuclear-missile-armed Trident submarines. Entering without permission, they hung banners, displayed crime scene tape and poured their blood on the base grounds. They protested the U.S.’ preparations, far exceeding those of any other nation, to commit “omnicide”, to carpet the world in in fire, in fallout, in the snows of a deadly “nuclear winter,” in ash. For the past fifteen months, they’ve awaited trial on charges of conspiracy, destruction of property on a naval station, depredation of government property, and trespass. They feel that U.S. readiness for war must be put on trial now, or potentially never.

Another of Martha’s co-defendants has been a guest, like us, of the Afghan Peace Volunteers. Our friend Carmen Trotta recalls a visit to the Emergency Surgical Center for Victims of War, an Italy-based hospital that treated many victims of the recent Kabul attacks. In 2014 we had visited the hospital to donate blood, and met Jamshaid and Farshaid, young teens who had survived a suicide bomb attack on the United States military base in Bagram. They had been standing outside their school outside the base when the attack happened. Farshaid’s leg had been amputated. Jamshaid had lost much of his vision. We asked Michaela Paschetto, a young Italian nurse, how they were faring.

“Today was a bad day for them,” she said. “Really, I don’t ask so many questions,” she continued. “It becomes too much.”

“I didn’t know what to say,” Carmen recalls. “I honestly couldn’t think of a word to say.”

Carmen, Martha and each of the Kings Bay Plowshares 7 will have their say, however brief, in a Brunswick County federal court on August 7. Oral arguments will be heard including several motions as well as their belief they opposed the U.S. nuclear arsenal in accord with their religious faith. They have consistently opposed weapons and wars and just as steadfastly served, as members of Dorothy Day’s movement, their impoverished neighbors. They understand the wars, the omnicidal weapons awaiting their use at Kings Bay, and the suffering of the U.S. poor as, in some sense, all part of a global war on the poor. 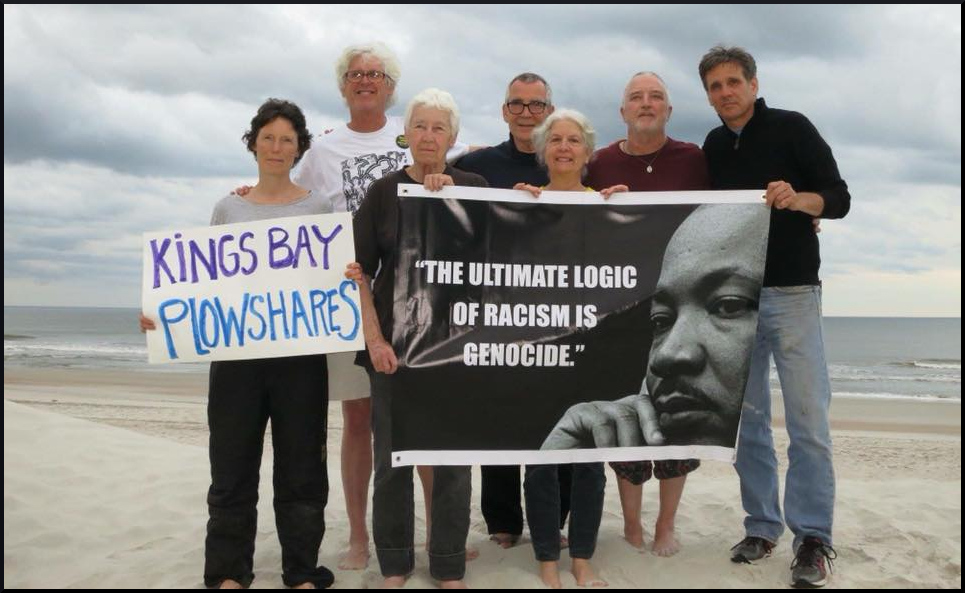 Depending on whether we resist or acquiesce, grieve or complacently ignore, we ourselves risk becoming the tragic, perpetually dangerous remnants of war.

*Featured Image: A carpet carefully woven to illustrate several types of land mines Afghans should watch out for. ~Martha Hennessy

Kathy Kelly (kathy(at)vcnv.org)  is a co-coordinator of Voices for Creative Nonviolence. When in Kabul she is a guest of the Afghan Peace Volunteers.