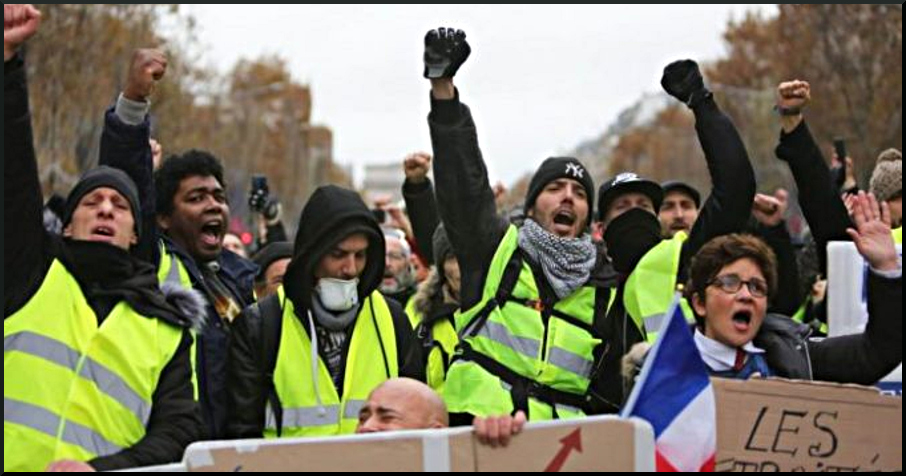 “Act 21” of the Yellow Vests took place on Saturday, April 6, as their demonstrations have every week for almost five months.  But a parallel event was held from April 5 to 7 in the evening in Saint-Nazaire, in Loire-Atlantique, which will certainly influence the course of future struggles in the country: the Second Assembly of representatives of the lower assemblies of the Yellow Vests. It is the central focus of the movement.

The First Assembly, which attracted 70 delegates, took place in the Meuse, in Commercy, at the end of January. This time nearly 200 delegations arrived in Saint-Nazaire, which means about 800 delegates were present. (There were two representatives and two observers per delegation.) This doesn’t even include volunteers, journalists and the curious.

These delegates were elected by about 10,000 Yellow Vests who mobilized at hundreds of battle points — traffic circles, squares or toll areas.  But when they were dislodged by police, they organized in multiple places that were much more remote and less visible — sometimes even in makeshift huts. This is the Resistance throughout France.

It seems there was an alleged “threat to public order.” This was the pretext given by the mayor of Saint-Nazaire, David Samzun (a self-defined “socialist”), to justify his refusal to lend a space to the organizers. The elected representatives of neighboring municipalities did the same thing — and so no rooms were made available to the Yellow Vests.

Then the Yellow Vests found themselves at the “Maison du Peuple” (the People’s House), a former employment agency that they had been occupying with fellow trade unionists since November. It was a real “people’s takeover” — in the pure historical tradition of the sans-culottes clubs of 1789 [beginning of the French Revolution], the occupations of labor exchanges at the beginning of the 20th century, and of factories by striking workers during the 1936 Popular Front.

Some preparatory work and a lot of solidarity enabled the Yellow Vests to gather together and give each other courage — and to debate, get organized and fight better.

This meeting had initially been scheduled for the end of March, but the material difficulties for most participants in meeting their financial needs added to the problems of logistics and led to a delay of a few days. Once their pay or allowance had been received at the beginning of the month, these participants were breathing a little easier, and so were those who already had funds.

Others wanted to attend, but the large crowds forced the organizers to close registration. Even more people who wanted to come could not because they could not afford the trip. One can rely on the generosity of one’s friends, but they may also have very little money. One can also rely on one’s own capability.

In 1864, the first preamble to the International Workers’ Association statutes reads, “The emancipation of the working class must be the work of the workers themselves.” Being a Yellow Vest means one is not afraid of mud, rain or empty pockets.

There were three days of serious discussions at this assembly. They were often difficult, stormy and chaotic. Like the mobilization itself, which was launched in mid-November, they revealed the determination of the Yellow Vests and their resolute and tenacious opposition to this society filled with inequalities and injustices, symbolized by President Emmanuel Macron.

Delegates unanimously condemned the police repression and violence of which they are victims. And they held to their stubborn desire to place direct democracy at the heart of the movement — to think and reinvent authentic forms of it from the bottom up, without a self-proclaimed leader or recovered leader — and to find the “balance between spontaneity and organization.”

Unity to advance the struggle

First and most important is the collective in “horizontality” (equal participation). It is crucial to maintain unity in a movement that comes back  together — reassembles — to stop the threat of division and fragmentation. It must be a unity that pulls people together, despite all existing differences, including political perceptions and sometimes even social origins, and that continues to portray a good public image and enjoy strong public support. That is what will advance the struggle.

The debates, which were visible on the internet, were structured into thematic working groups concerning: the movement’s modes of action, internal and external communication, the formulation of demands, points of convergence with trade unions and other groups, and the future of mobilizations.

Finally, the plenary session presented summaries of the committee discussions — which were drawn up overnight — and a final text, which was particularly lucid and radical.  The text will later be submitted for a vote by the various local assemblies of Yellow Vests.

What does this text say? It made essential points. It says that demands should focus on increases in wages, pensions and social benefit minimums, and pay special attention to the 9 million people living below the poverty line.  It says that public services must be strengthened for all. This is fundamental. (Text: tinyurl.com/y5c9s54z)

This text says “no” to the violence imposed by a privileged minority against an entire people. It says “yes” to cancelling the sentences imposed on prisoners and convicts from the Yellow Vest movement, and it stresses:

“Police violence is an act of political intimidation. It seeks to terrorize us to prevent action. Judicial repression followed to stifle the movement. What we are experiencing today has been the daily life of working-class suburbs for decades.”

The final text also rejected the “trickery of the Great National Debate” which is wanted and is manipulated by President Macron. It also states the Yellow Vests’ refusal to participate in the European elections next month:

“The street unites us, the elections divide us. It is in the struggle that the Europe of the peoples will be built.  It is by conducting a coordinated fight against our common exploiters that we will lay the foundations for fraternal understanding between the peoples of Europe and elsewhere.”

Above all, the call of the Second Assembly of the Yellow Vests at Saint-Nazaire affirmed on April 7 that “to improve our living conditions … to rebuild our rights and freedoms … [and] to eliminate the forms of inequality, injustice and discrimination,” so that “solidarity and dignity” will happen, it will be necessary to change the social system. The grouping stated, “Aware that we have to fight a global system, we consider that we will have to leave capitalism.” And for that, we must “gather all citizens together in order to battle against this system.”

The message addressed to environmentalists is clear and progressive. Will they hear it? They must. Since the environmental emergency is on the order of the day, the convergence of the fight for ecology with the struggles for social progress is essential. It is “the same logic of never-ending capitalist exploitation that destroys human beings and life on Earth. In order to protect the environment, we must change a system that is harmful to humans and ecology.” This is meant for those who had doubts about the left orientation of the Yellow Vest movement.

Such orientations and formulations have not been easy to agree upon. Some delegates found them premature. Others feared that if adopted,  this movement would become dogmatic, indoctrinated and too rigid.

Of course, we are still a great distance from exiting the capitalist system. But it is so important to know what we need to fight. These Yellow Vests, gathered in the crowds and hubbub of the People’s House “for the workers’ honor and for a better world,” have clearly understood and expressed what almost no one in our senior partisan and union leaderships — or among our committed artists or our great intellectuals — understands or expresses anymore.

Yes! To hope to build a “world of freedom, equality and fraternity” [motto of the French Revolution] we will have to break away from capitalism. Without this nothing is possible. This is the beginning of any real alternative program. This is because the Yellow Vests, who rose up against unbearable conditions, will no longer let themselves be fooled. The 21st century will not be the end of history.  It will be the beginning of a new postcapitalist civilization.