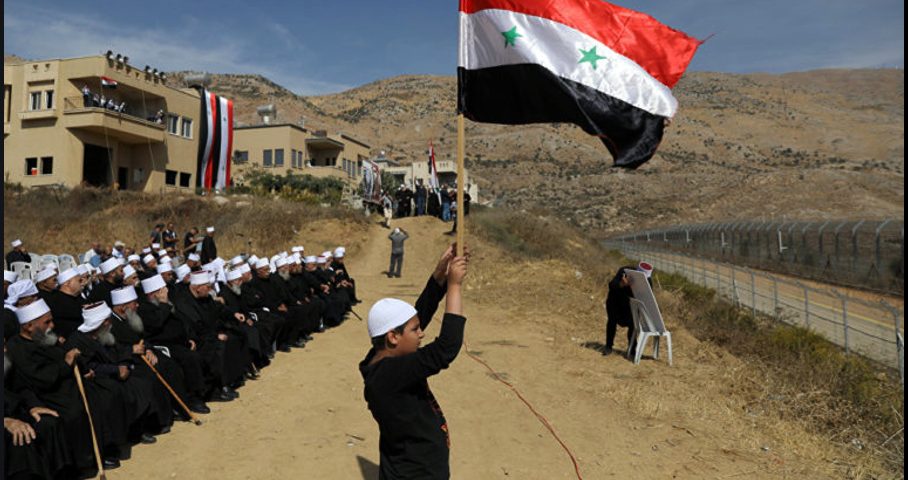 With the military situation largely frozen, the last two months have been marked mainly by developments involving the US – the ending of the ISIS caliphate in the US-controlled part of Syria, Trump’s U-turn over keeping US forces in Syria, and US recognition of Israel’s annexation of the Golan.

Ambassador James Jeffrey, the US special envoy for Syria, gave an under-reported press briefing on 25 March which made fairly plain the US strategy. Far from being sated with its demolition of ISIS and resigned to Assad’s ‘victory’, the US clearly clings to its desire to remove Assad and proposes to go about that through economic warfare and by maintaining a military presence using the pretext of ensuring the ‘enduring’ defeat of ISIS.

Here is what Jeffrey said [including my annotations]:

“Okay, that’s a broad question. First of all, the political solution. The U.S. policy in Syria is to ensure the enduring defeat of ISIS. We’re a big step closer to that today, but ISIS still lives on in various cells and in the minds of many of the people in the areas that we’ve liberated. [Not just cells and minds actually: thousands of ISIS fighters hold territory in desert areas contested with the Syrian army in nominally government- controlled territory, but acknowledging that would mean acknowledging that Assad is fighting ISIS].

“Secondly, to ensure a political process that will give us a different kind of government [there you go, regime change] that will encourage people to come back [because then we shall stop using depopulation as a weapon] and be a decent player in the international arena [wonderful euphemism for being more pliant towards Israel], unlike what we’ve seen from Syria in the last eight years. And then thirdly, the removal of all Iranian-commanded forces from the entirety of Syria [even though, unlike ourselves, they are there by invitation].

“So our forces will stay on in very limited numbers in the northeast and al-Tanf to continue our clearing operations and stability operations against ISIS [even though in Al Tanf there are absolutely no ISIS] for a period of time not to be determined at this point [i.e. we plan to stay indefinitely].”

Jeffrey was similarly forthcoming over the ‘safe zone’, which was originally the rationale for leaving US forces in North East Syria:

“In terms of the Kurds, what we’re working with is with Turkey to have a safe zone of some length along the Turkish border where there would be no YPG forces, … But we also do not want anyone mishandling our SDF partners, some of whom are Kurdish

[most, actually, but we have to pretend the SDF is not essentially a Kurdish militia]. And so therefore, we’re working for a solution that will meet everybody’s needs.

“We’re not really looking at a coalition to be peacekeepers or anything like that [totally contrary to what we said a month ago]. We’re asking coalition personnel to continue to contribute and to up their contribution to our D-ISIS operations in Syria, and we’re getting a pretty good response initially. But the mission is D-ISIS, Defeat ISIS. It’s not to operate in any safe zone.”

In other words, US policy is to keep US forces illegally camped in Syria, along with as many as possible Coalition allies like the UK and France with their deniable special forces, all pretending to be whacking ISIS moles gone underground who might pop back up, as if a few hundred troops scattered across an area of Syria bigger than Texas could manage that task. And pretending that the real mission isn’t to keep Assad out, with protection for the Kurds against Turkey an incidental prerequisite.

The latest reports suggest that the Pentagon will withdraw over the rest of this year only about half of its force total of about 2,000, with the rest to follow in late 2020, or not. In reality, therefore, Trump’s ‘withdrawal’ will change absolutely nothing. It’s ‘as you were’.

UK policy on Syria was set out before the Security Council by the UK Deputy Permanent Representative to the UN, Jonathan Allen, on 27 March. He demonstrated the same mixture of obfuscation, plain deceit, denial and hubris as Jeffrey.

In his address, provocatively entitled ‘The Syrian Regime’s Continued Failure to Address Challenges to Peace and Stability“, Allen preened over the success of the Coalition in the area East of the Euphrates, without even a nod towards the achievements and sacrifices of the Syrian Arab Army (SAA) and its allies in removing ISIS from equally extensive areas West of the Euphrates, or the ongoing battles (notably the SAA is battling hundreds of ISIS fighters over possession of the important border town of Abu Kamal, which keeps changing hands).

Allen went on to warn that ‘the threat of a humanitarian disaster continues to loom in Idlib, with frequent reports of shelling and airstrikes by the regime and its backers,… [we] continue to support Turkey’s efforts to prevent a reckless military offensive by the Syrian regime’. The UK ‘called on Russia and Iran as Astana Guarantors alongside Turkey to ensure that the ceasefire is respected’. Not a word to recognise the reality that Turkey has stood by while the most radical jihadis of Hayat Tahrir Ash Sham (HTS) have extended their control over Idlib; that HTS has been heavily shelling Christian villages, reportedly using chemical weapons (no point looking for any reporting of that in the Western media; it wasn’t reported by the supposedly neutral White Helmets); and that ISIS elements, having been allowed to flee through the Coalition’s net, are now vying with HTS for control over parts of their NATO- protected safe haven.

Allen went on to opine that:

“…the conflict and the crisis in Syria will not end unless the root causes of the conflict are addressed [ignoring the fact that the conflict is already over in the 70% of Syria now under government control]. There will be no stability without the creation of a safe environment [difficult surely while we obstruct the pacification of Idlib by threatening Assad if he attacks].

“Refugees will not return without credible assurances for their safety [while we take away the nationalities of our own jihadi families to stop them returning to the UK and subsidise the Syrian refugees with welfare payments to induce them to stay where are]. Radicalisation and unrest will not end without action being taken to resolve failures of governance, including the lack of basic service provision [how to improve that, while we work overtime to immiserate Syria?], economic opportunity [in the face of sanctions?] and representative institutions [as in the Gulf?].

“We and others have indicated on numerous occasions our readiness to assist Syria with reconstruction, should there be a negotiated political settlement [never mind the suffering if it helps lever Assad out of power]…. It is time… for a government in Syria that will do right by its people [obviously not this one but one led by our stooges].”

Trump’s recognition of Israel’s purported annexation of the Golan is of a piece with US retention of de facto control of North East Syria. It is part of what Charles Freeman, former US Ambassador to Saudi Arabia, has called the ‘international vivisection of Syria’, with the US, Israel and Turkey all getting their claws into a body near prostrate after eight years of conflict.

While the main impact of the recognition may be felt more further down the line in Palestine by the emboldening of the Israeli Right in its quest to annex the West Bank, the decision may have only limited effect in Syria itself. It is unlikely that Syria or any of its allies would respond militarily. There may be some impact however on efforts Russia had been making to restrain Iranian moves towards creating a form of Syrian Hizbollah in the border region. Russia may well ask: why bother?

Although, especially in the cities, some degree of normalisation is observable, conditions generally are extremely difficult. Reeling under the impact of eight years’ war, continuing battles in the North, de facto US occupation of the oil-and gas producing areas, a heavily damaged infrastructure, depopulation, and sanctions, the Syrian government is struggling to provide basic services let alone rebuild. Predictably there is a lot of grumbling among ordinary citizens.

Discontent is even greater in some of the liberated areas such as Deraa and Eastern Ghouta, where there have been small demonstrations. Security remains a government priority, not surprisingly when so many anti-government fighters simply went to ground at the end of the fighting.

The returning refugees from Lebanon and Jordan number only in the low hundreds of thousands, most put off returning by the difficult economic conditions at home and the endless welfare subsidies paid by Syria’s enemies which are strong incentives to stay put. Without its people Syria will continue to struggle. That of course, is what the West is pinning its hopes on, in some vague hope that Syria will become ungovernable and that some leader will emerge, perhaps a Syrian Guaido, to unite the country. This is fantasy.