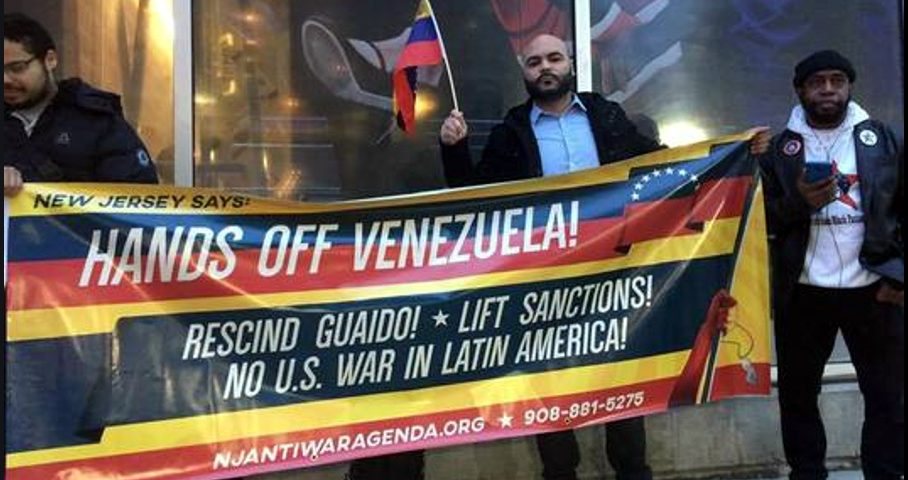 by Alison Bodine, Published on Council on Hemispheric Affairs, March 29, 2019

On March 16, 2019, more than 1000 activists from across the U.S. gathered in Washington, DC for the “U.S Hands Off Venezuela!” demonstration.  However, Canadian journalist Arnold August was not one of them – earlier in the day he was unjustly denied entry into the United States at U.S. Customs and Immigration in the Montreal Airport.

As August explained in a video posted on social media, after asking the U.S. border officials multiple times the reason for his denial of entry, he was told that he was denied entry due to previous arrests in Canada. This was in reference to his arrests at antiwar and labour protests in the 1970’s. However, as August also stated, the U.S. border control authorities had been aware of these arrests during his other entries into the U.S.:

“Previously they have delayed my departure into the U.S., where I missed a plane but finally left, and on other occasions let me go through, but never have they stopped me.”

So, the question is – why deny him entry now? What message is the U.S. government sending to independent journalists and activists by denying Arnold August’s democratic right to express his political views in support of the sovereignty of Venezuela at a peaceful demonstration?

Since the U.S./NATO invasion of Afghanistan in 2001, the government of the U.S. has carried out continuous wars and occupations in parts of the Middle East and North Africa. In tandem with these wars abroad there has also been a concerning increase in the political targeting of journalists and activists in order to quell opposition to war and suppress voices of dissent. Subsequently, the U.S. border, where people crossing are already stripped of many fundamental human and democratic rights, has become an increasingly threatening and brutal place.

Today, the U.S. government is at war with Venezuela. In the last two months, they have escalated their illegal efforts to overthrow the democratically elected government of President Nicolás Maduro. This has included an attempted coup d’état led by U.S.  sponsored Venezuelan legislator, Juan Guaidó. This coup attempt has been defeated in Venezuela by a committed network of community-based organizations, the armed forces, and hundreds of thousands of Venezuelans who have been demonstrating in the streets against any illegal foreign intervention. Also, the dangerous provocations and news manipulations at Venezuela’s borders with Colombia and Brazil in the name of so-called humanitarian aid has not been successful. Together with the European Union, Canada, Switzerland, and Panama, the U.S. government has imposed crippling economic sanctions against the people of Venezuela.

It is no coincidence that August was refused entry into the United States while on his way to attend a protest demanding an end to U.S. war on Venezuela. The U.S. government is actively attempting to limit the reach of his dissenting voice, and send a signal to other like-minded people, that they too might be targeted. As August explained in an interview for this article,

“I guess they didn’t like what I was doing with regards to Venezuela within the United States of America.”

Along with many other independent journalists, August has been advocating for an end to the U.S. war on Venezuela and exposing the misinformation and manipulations of the U.S. government and mainstream media pundits about Venezuela and President Maduro. His opposition to both the U.S. and Canadian policy of sanctions and aggression against this South American nation has been well publicized.

The red flag really goes up when you examine similar cases of U.S. and Canadian border officials politically targeting activists and journalists. There is a clear pattern of government attacks on fundamental human and democratic rights of people crossing borders to exercise their freedom of speech and assembly, as well as their right to dissent. These abuses have ranged from well-known political activists being harassed and “banned” at the border, to the denial of entry to groups of people to attend a peaceful protest or conference.

In fact, when I heard that Arnold August was stopped from entering the border, I immediately recalled my own two-year ban from Canada, which was imposed after I was politically targeted at the border in 2007 and questioned about my antiwar and social justice work.

Back in 2007, within a few months of my banning, Medea Benjamin and former United States Army Colonel Ann Wright, leading U.S. peace activists and organizers with Code Pink, were also targeted and denied entry into Canada. As Ann Wright explained in Common Dreams,

“I had been denied entry to Canada twice in 2007 and Medea had been denied once in 2007. Canadian immigration told us that we were ineligible to enter Canada because of our arrests (not convictions, just arrests) for peaceful, non-violent protest Washington, DC in front of the White House and the US Congress; in New York at the US mission to the United Nations and the United Nations itself; in Crawford, Texas; and San Francisco, California.”

Targeting them for exclusion set a dangerous precedent for the harassment of political activists, and people with dissenting views, on both sides of the U.S./Canada border.

Another notable case is that of Ilija Trojanow, a Bulgarian–German writer who was denied entry into the United States, without being given any reason. He is well-known for his writing in opposition to the National Security Administration (NSA). Trojanow was on his way to attend an academic conference. There is also recent precedent even for the targeting of people who are not well-known for their political views. For example, in 2017 there were multiple news stories about people being turned away from entering the United States from Canada while on route to the Women’s March for “planning to attend a ‘potentially violent rally’,” as reported in the Independent .

Since then, expanding cooperation between US and Canadian authorities at the US/Canada border has also been further exposed. As reported by the Guardian newspaper, in 2016, U.S. President Obama and Prime Minister Trudeau expanded an FBI “anti-terrorism” database called “Tuscan” that provides more than 680,000 names to every border guard. This is a database clothed in secrecy, and no doubt full of errors, akin to the “No Fly Lists” that the U.S. and Canada both continue to maintain.

There is also the recent case of harassment experienced by Code Pink activists Medea Benjamin and Ann Wright who were questioned at the airport by the FBI upon their return from a peace delegation to Iran. They were

“greeted by FBI agents who had a whole dossier on us of what we did, which mostly they got from our own website, our blogs. But they also had a packet of information for us about the sanctions on Iran, the U.S. government policies towards Iran, the issue about registering as a foreign agent, indictment of Iranian groups to scare us away from talking to them,”

as reported to Real News.

These exclusions constitute a slippery slope towards limiting our democratic rights to organize and express political views peacefully. In 2014, the New York Times reported that

“A past arrest or conviction — even a public admission of illegal activity — can be grounds for inadmissibility. So can political activism or the impression that a traveler is visiting on business without obtaining a work visa.”

From the “Muslim ban” and the brutal crackdown on refugees and asylum seekers attempting to enter the United States, to continuous targeting of people at the borders due to their skin colour, religion or country of origin, both the U.S. and Canada’s borders are increasingly becoming zones free of respect for human and democratic rights or international law.

As the U.S. government ramps up it’s war against the people of Venezuela, our united actions across the U.S. and Canada border, such as rallies and conferences, are more important than ever before.  When Arnold August was refused entry into the United States, it was an attack against the human and democratic right to express dissenting views, organize and gather in opposition to the United States sanctions and war against Venezuela, and to share reports on what is happening in Venezuela today.

When it comes to how to support Arnold August following his political targeting at the U.S. border – he had a clear response:

“I would say that the most important thing is not to support me, but rather to support the Bolivarian revolution, support the cause of Venezuela’s right to self-determination.”

With regard to August’s commitment to continue supporting Venezuela against U.S. war, he said,

“Of course, I will continue to write on Venezuela. In fact, I would say that I am even more determined to tell the truth about Venezuela, to support the Bolivarian revolution, to support Cuba.”

The practice by the US and Canadian governments of refusing entry of those who express dissent from official policy erodes our democratic rights both at and beyond the border. By reducing the parameters of acceptable debate, this practice of excluding other points of view poses a serious curtailment of free speech and assembly not just for activists, but for everyone engaged in debate on the most urgent issues of our day.

Alison Bodineis a social justice activist, author and researcher in Vancouver, Canada, on the Editorial Board of Fire This Time Newspaper. She is the author of ‘Revolution and Counter-Revolution in Venezuela (Battle of Ideas Press, 2018)’.  Follow Alison on Twitter: @Alisoncolette