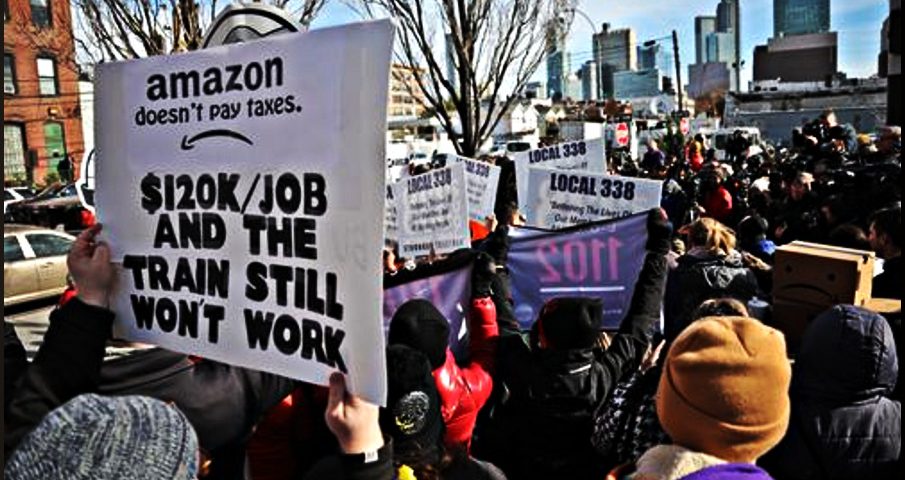 On Feb. 14, Amazon, owned by the world’s richest man, Jeff Bezos ($166 billion), announced that it was pulling out of a deal made with top New York Democrats for a second Amazon headquarters in Long Island City, Queens, near Manhattan, due to opposition from local politicians. But the resistance was much deeper. Community groups, housing activists, unions, and immigrant-rights advocates sprang into action to take on the seemingly invincible trillion-dollar tech giant.

Amazon said that its new New York headquarters would cost over $2 billion to build and provide 25,000 jobs, with an average salary of $150,000. Outrageously, the agreement reached last November with Mayor Bill de Blasio and Governor Andrew Cuomo, two “progressive” Democrats, was negotiated in secret and included an outrageous $3 billion bribe/incentive in tax breaks to Amazon.

Adding fuel to the outrage was a report released by the Institute on Taxation and Economic (ITEP) policy on Feb. 13, which revealed that the tech giant would not have to pay a penny in federal taxes for a second year in a row, despite a whopping $11.2 billion in profits!

The protests, the outrage over the $0 taxes, and opposition to the $3 billion giveaway forced Amazon to retreat—at least for now.

Amazon’s new headquarters (HQ2) was to be located next to the Queensbridge Housing project, the largest, low-income public housing complex in the U.S., an ethnically diverse community that would have faced an acceleration of the gentrification that is already engulfing Long Island City (see Socialist Action, January 2019).

Acting quickly, about 100 community organizations mobilized, including Make the Road NY, Desis Rising Up and Moving, and many others—even some Democrats, like Queens Congresswoman Alexandria Ocasio-Cortez. Protesters rushed to the proposed HD2 location for angry rallies. Amazon opponents stormed a high-profile hearing on Amazon at the Democratic Party controlled City Council, where demonstrators chanted and did a banner drop, all caught on TV. Protesters also rallied in front of an Amazon bookstore.

The Retail Wholesale and Department Store Union denounced the deal at a City Hall press conference. Democratic Socialists of America (DSA), despite its illusions in the Democratic Party, mobilized significant numbers for community outreach and protest.

Labor viewed the deal with suspicion, given Amazon’s reputation as an exploiter of labor with a union-busting strategy. Amazon is synonymous with very long workdays at low wages, wages so low in fact that many Amazon workers are on food stamps. Moreover, as documented by The New York Times, there is a militarized work culture at Amazon and unhealthy working conditions, such as excessive heat and cold.

At a City Hall press conference sponsored by unions, Rashad Long, a Staten Island Amazon worker, told of his complaining to supervisors about excessive workplace heat. When asking that the air conditioning be turned on, he was told, “Robots cannot work well in the cold.”

At the moment, there is an ongoing union drive at Amazon’s relatively new location on Staten Island, which is already infamous for mistreatment. If successful, the union would be the first of its kind in the U.S. In Europe, however, coordinated strikes against Amazon have broken out in Italy, France, Germany, Poland, Spain, etc. (see the RWDSU’s union report, “What’s Wrong with Amazon?”).

New York immigration activists have mobilized against Amazon for its use and sale of facial recognition technology. A report from the ACLU revealed the company’s sale and marketing of “Rekognition” to police departments and government agencies like Homeland Security and Immigration and Customs Enforcement (ICE).

A protest letter to management from Amazon workers said, “We already know that in the midst of historic militarization of police, renewed targeting of Black activists, and the growth of a federal deportation force currently engaged in human rights abuses—this will be another powerful tool for the surveillance state, and ultimately serve to harm the most marginalized.’’ The workers also demanded an end to Amazon’s cloud-hosting services with Palantir, a Silicon Valley data analysis firm. “We know that ICE relies on Palantir to power its detention and deportation programs,’’ said the letter.

The announcement of Amazon’s New York pullout will not stop the creation of the Arlington, Va., Amazon location, in a very wealthy area negotiated with Virginia’s Governor Ralph Northam (Democrat), who was recently exposed for appearing in a disgustingly racist college photo. Amazon’s Virginia ransom was “just” $573 million, based on 25,000 jobs created with an average salary of over $150,000. However, studies of corporate deals on “job creation” for massive tax breaks reveal a trail of broken promises at all levels—and few, if any, jobs (see the recent “Truthout” article, “Amazon HQ2: Why New Yorkers Were Right to Be Skeptical”).

Wannabe progressive leader Governor Andrew Cuomo has said, kidding on the sly, “I’ll change my name to Amazon Cuomo if that’s what it takes.” Cuomo also said that the cost to New Yorkers would be a mind-boggling “nada” because, supposedly, Amazon’s future tax payments and contributions to the economy would compensate for the $3 billion tax gift to Bezos—an assertion that astonished serious observers.

Since taking office, Mayor de Blasio has pretended to be a defender of working people and the poor. His 2014 first-term election theme was that New York City had become “A Tale of Two Cities,” a reference to a 19th century novel describing extremes of wealth and poverty. De Blasio led the 2018 re-zoning (gentrification) of upper-Manhattan’s low-income Hispanic Inwood section—with overwhelming support from the Democratic-controlled City Council—which many activists called, “ethnic cleansing.” Inwood was the fifth de Blasio rezoning scheme to pass; all except one are in Black, Latino, and Asian working-class neighborhoods.

The fight against Amazon proved that mobilizations work. Unfortunately, Amazon is not leaving New York, nor will the real-estate grabbing tech giant Google, but will merely adjust its tactics. On March 1, The New York Times printed a letter signed by CEOs from Mastercard and Goldman Sachs, the New York State AFL-CIO, several large public unions, and others asking Amazon to reconsider New York, with the mayor and the governor on board.

According to The Times, top Democrats, including Ocasio-Cortez, are waffling in their opposition. Will they cut a rotten deal on gentrification and exploitation? Stay tuned! It is certain that the Democratic Party will continue to serve the goals of big business. To win, labor and the oppressed communities must mobilize in massive numbers until Amazon’s plans are defeated once and for all.