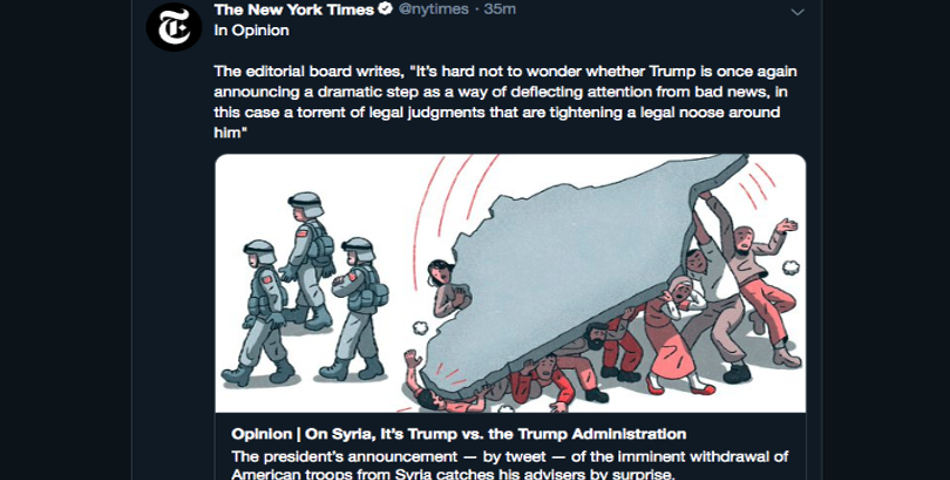 President Trump has ordered the withdrawal of US troops from Syria, which is reportedly expected to take 60–100 days or 30 days depending on who you ask. According to Kurdish forces in eastern Syria the withdrawal of American as well as French troops is already underway, though France is saying it’s staying. The number of troops to be withdrawn which keeps getting repeated in the news is 2,000, but there’ve been reports that the actual number of US ground troops in Syria is closer to 4,000. The US-led airstrike campaign against Islamic State will reportedly continue.

Trump says the withdrawal is because ISIS has been defeated in Syria, but others are pointing to the conspicuous timing of his recent chat with Turkey’s President Tayyip Erdoğan, who has announced a coming military operation against Kurdish forces in Syria east of the Euphrates in the near future, as the more likely reason. An anonymous senior US official has told Reuters that the two leaders didn’t discuss a US withdrawal from Syria, but the timing of the conversation as well as a recent $3.5 billion arms deal with Turkey indicates the the US withdrawal and Erdoğan’s planned military assault could very well be related. The Kurds put all their eggs in the basket of US support out of a desire to create their own nation, and a US withdrawal means they’ll be forced to either court an alliance with Damascus, as some analysts believe will happen, or risk being trapped between hostile Turkish forces and hostile Syrian coalition forces as the Assad government races to reclaim Syrian territory.

Beyond that, it’s hard to tell what’s actually happening. I’ll be astonished if there is an actual US withdrawal from Syria without any residual or proxy forces left behind, and it remains extremely possible that US troops won’t leave at all, especially if another conveniently timed “chemical weapons attack” gets attributed to Damascus. This administration has been going back and forth and back and forth about what its Syria policy actually is ever since Trump took office, and it won’t be the least bit surprising if we end up seeing very little change in US military presence. Things could very well just get shuffled around a bit and then re-settle as power struggles are sorted out within an administration that is endlessly in conflict with itself.

Everything I’ve just typed is basically a jumbled information salad of possibilities and speculation; it’s just me saying “Here’s what little we know, now we wait and see” and then shrugging. The real information that we can look at right now is the absolutely bizarre bipartisan response that Trump’s announcement has elicited.

As soon as Trump announced via Twitter his intent to withdraw troops from Syria, everyone has been losing their minds. Virtually every liberal media outlet has reacted hysterically, with the New York Times editorial board condemning the decision, along with multiple CNN and MSNBC releases and Rachel Maddow going full Rachel Maddow but with Turkey this time. Senators Lindsey Graham, Marco Rubio, Jeanne Shaheen, Tom Cotton, Angus King and Joni Ernst wrote Trump a bipartisan letter warning that a US withdrawal “may embolden Bashar al Assad to take further actions to solidify his power” inside the country he is the president of. Hollywood celebrities like Bette Midler, Mia Farrow and Cher burst out of their dust pods of irrelevance to scream at everyone that limitless US military expansionism is glorious and desirable. Max Boot, the legendary Man Who Is Always Wrong About Everything, declared that Trump is giving a “gift to Iran, Russia, ISIS, and Assad” by exiting.

That word “gift” appeared again and again and again and again. The New York Times editorial board declared “An American withdrawal would also be a gift to Vladimir Putin, the Russian leader, who has been working hard to supplant American influence in the region, as well as to Iran, which has also expanded its regional footprint.” Victoria Nuland in the Washington Post declared that “With his decision to withdraw all U.S. forces from Syria, President Trump hands a huge New Year’s gift to President Bashar al-Assad, the Islamic State, the Kremlin and Tehran.” The New York Times’ Bret Stephens called it “A gift to Iran, Hezbollah, and Putin.”

And all the rank-and-file consumers of mass media are now parroting that talking point at every opportunity. Do a Twitter search for the words “gift” and “Syria” together as of this publishing and you’ll come across not just blue-checkmarked establishment mouthpieces teaching that slogan to their followers, but countless ordinary people regurgitating it as well. Not because they believe in endless US military expansionism, not because they truly understand what’s going on and take issue with it, but because they hate Trump and they were taught to repeat a specific line in order to criticize him.

“Great, we are negotiating our departure from the house in hopes of protecting our interests in the neighborhood. Ok, the house is yours. We are moving out. Once we are gone, we’ll start negotiating price.”

Art of the Idiotic Deal.

The thing about this “gift” idea, and really with all the criticisms that are being leveled against Trump’s supposed troop withdrawal, is that they all have as their premise the assumption that Syria belongs to America. #Resistance pundit and tentacle porn aficionado Kurt Eichenwald even compared the withdrawal to a homeowner giving away their home without negotiating a price first. All across the board in these criticisms there is this one bizarre assumption that is going completely unquestioned: that Syria is America’s property, and ceasing to treat it as such would be giving that property away to someone else, whether it be Russia, Iran, or Syria’s own government.

But Syria is not America’s property, and the US has never had any right to be there at all. Russia, Iran and Hezbollah, unlike the US, are in Syria at the invitation of the nation’s only legitimate government. They are there fighting back the extremist forces which had captured large territories with the backing of the US and its allies in an attempted regime change intervention which was planned long before violence erupted in 2011. All these pundits pontificating from their armchairs about retaining control of Syrian land in order to “counter the influence” of Iran or Russia are claiming that an invading, occupying force should retain control of a third of Syria in order to control what a sovereign nation does with its own allies.

And that just says so much about the mentality of the American elite class and its lackeys. For the thought leaders of the US global order, and for the unthinking human livestock who follow their decrees, America is the only sovereign nation on earth. If China invaded the US and occupied a third of its territory in order to counter Canadian and British influence we’d be looking at World War Three that very day, but doing exactly that in a disobedient Middle Eastern country is looked at as so normal and routine that any apparent deviation from that strategy is regarded with shock and outrage. And the only thing that keeps this obvious discrepancy from being treated like the ridiculous power-serving double standard that it is is a claim to moral authority by a government which literally armed terrorists in Syria.

Syria is not a “gift” that can be “given” to Putin, despite the blinkered American political climate which places everything in that asinine context. It’s a country over which the United States has no legal authority, and never did, despite years of casualties and billions spent pic.twitter.com/7WztDNedt5

So while the jumble of information and speculation about Trump’s possible Syria maneuverings doesn’t necessarily tell us a whole lot, the reaction to it tells us why the world looks the way it looks. The most powerful military force in the history of civilization inflicts violence and domination with total impunity and total disregard for national sovereignty, demanding total respect for its own borders and total compliance from all nations outside its borders. Nations which obey are absorbed into an alliance that is so tight and streamlined it can effectively be called an empire, while nations which disobey are invaded, occupied, disrupted and destroyed.

I write about the United States so much partly for the same reason I’d keep an eye on a guy at the bar who was always walking around knocking people off their chairs and drinking their beer, and partly because a conscious relationship with the concept of sovereignty is so very, very important if we’re to learn to survive the troubles we’re facing as a species. Sovereignty is what personal, political, and societal problems all ultimately boil down to. Becoming conscious of all the myriad ways we extend beyond our own sovereign boundaries and intrude into the sovereignty of others, be they personal, ideological, national, or ecosystemic, is the path toward creating a world wherein we can all collaborate with each other and with our environment in the interests of the greater good.

We’ve got to evolve beyond this mentality of intrusive domination which is so aggressively promoted as normal by the mass media. The idea that it’s okay for a powerful nation to insert its military force into a weaker nation in order to manipulate geopolitical dynamics to its advantage is a sickness, and we need to heal it.

Caitlin Johnstone is entirely reader-funded, if you enjoy her work please consider sharing it, liking her on Facebook, following her on Twitter, bookmarking her website, checking out her podcast, throwing some money into her hat on Patreon or Paypal, or buying her new book Woke: A Field Guide for Utopia Preppers.